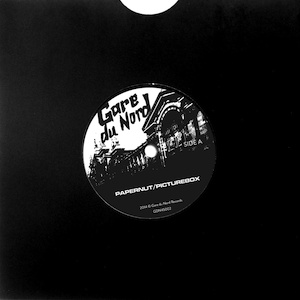 I don’t know where you are sitting right now, but the winter in the Connecticut hills was absolutely dreadful.  But spring has finally arrived and dour dispositions are (slowly) turning grudgingly sunny.  So this might be a good time to start working on that summer playlist- and the Swaps EP should definitely be included for long random car rides that hopefully end up at a sandy beach.

The Swaps EP is an interesting collaboration between Papernut Cambridge’s Ian Button and Picturebox’s Robert Halcrow.  The concept seems simple enough- Halcrow wrote A Nicer Man and Button wrote When She Said What She Said.  Then the pair swapped roles, with Halcrow singing the Button song and Button singing the Halcrow song.  The digital version of the EP is basically two versions of two very well-crafted songs.  The 7-inch vinyl EP includes three remixes of the songs.  If either of these two songs catch your ear- then you will love this EP and will likely want to expand your catalogue by checking previous work by Picturebox and Papernut Cambridge.

The two songs on the Swaps EP are crisp, clean, smart power-pop, and are definitely on my growing summer playlist.  This will be my soundtrack for doing stupid and lazy things in the coming months.  And I plan on doing both in abundance.

A Nicer Man is a classic example of Brit-pop for all the right reasons.  The composition is short and tight, jangly and hooky, in that Robyn Hitchcock / The Soft Boys sort of way.  The song plays like something from The Jam, but without the sneer (or the bloated ego).  It’s a simple song about a simple man that celebrates the nobility of being just an average guy:

“He’s a linchpin, top-man, salt of the earth, been granted his heart’s desire…”  That single line summarizes the elegant simplicity of Halcrow’s writing.  The musical arrangement is straight ahead with no frills- but with a texturally sunny sheen.  It’s hard to feel badly about anything when A Nicer Man is playing.

Then Ian Button takes a turn on the song- and you get a second, though not radically different version of A Nicer Man.  And you might notice the smile hasn’t left your face, the sun is still shining, and you can actually smell nice things as summer blossoms.

The thing about Brit-pop, is that while the songs are upbeat there’s still a message, whether it’s about class consciousness or personal struggles- there’s always a hard reality, with an occasional silver lining.  The performances by Papernut Cambridge and Picturebox are precise and uncluttered.  All the right chords are struck.  When She Said What She Said has a fluid and catchy synth hook played over a solid beat and crisp guitar work.  On first listen you’ll immediately connect the dots to your favorite pop songs- but Button and Halcrow masterfully make the sound their own.

The vinyl version of the EP includes two additional remixes of A Nicer Man and one extended version of When She Said What She Said.  The remixes are not wild departures from the original versions of the songs (but it would have been nice if they had been).  Regardless, these two songs are so well constructed and performed that I did not mind one bit playing the EP on constant repeat during a recent 100 mile drive.  As I mentioned, if you like Hitchcock, The Soft Boys, early Pink Floyd, channelling the Jam, or the mod-pop band of your choice- you will thoroughly enjoy the Swaps EP.  And you’ll like it even more once the temperature finally gets to the point where you don’t have to wear a hat and a parka.

You can stream the vinyl version of the EP and purchase here.

All words by Nat Lyon. Find his Louder Than War archive here.