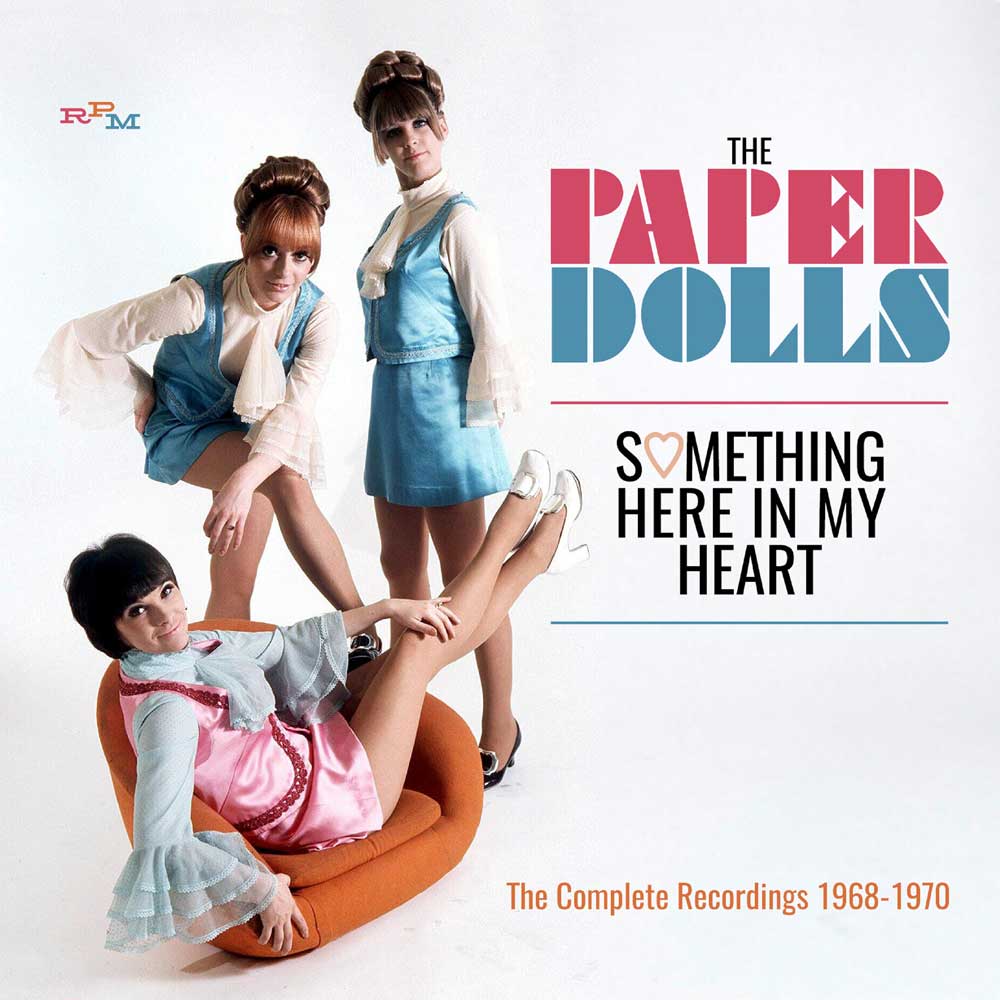 Paper Dolls – Something Here In My Heart

Compilation subtitled The Complete Recordings 1968-1970, rounding up everything set down on tape by the Northampton 60s Pop/Soul outfit the Paper Dolls, also including six tracks recorded by band leader “Tiger Sue” Mathis in the 70s……LTW’s Ian Canty probes the missing link between Motown, the “Girl Group” sound and Clubland in the North of England…..

Though the Paper Dolls on the face of it looked like a manufactured group, primed for the charts by a smooth publicity machine, they had actually worked their way through the clubs and developed their act in pretty tough circumstances. Susie Mathias, Sue Marshall and Pauline Bennett were three driven individuals who wished for a life on stage and pursued this dream at the Pitt-Drafen Academy Of Dramatic Arts, where they originally met. Working hard in the fields of song, dance and acting, they eventually took the plunge and went out in front of audiences under the name the Dolly Set.

After confidence-sapping spell as the supporting act at a strip club, the future Paper Dolls worked hard in the network of clubs in the North, where opportunities were vast if you could tailor your act to the audience. So they developed knockabout comedy routines and even ballet numbers, to cope with the need for variety. Peter Stringfellow, then a big wheel on that circuit, spotted them on stage in Chesterfield and became their de facto manager for a spell. He organised an audition at Pye Records, who he knew were on a lookout for a female trio. The Dolls, used to projecting their voices to the back of halls, managed to half deafen the assembled bigwigs with their first effort using studio microphones, but eventually they were signed up.

At this time they came under the guidance of Tony Macaulay and publicist David Cardwell, who insisted on a change of name. So they became the Paper Dolls and furthermore the individual band members were also retitled with reference to their personalities (stop me if this is sounding a little like the Spice Girls many years before they showed up – show business methods don’t change too much). Sue became Copper on account of her red hair, Pauline assumed the sobriquet Spyder because of mild arachnophobia and being the leader, Susie was now known as Tiger.

Though this all sounds a little hokey in 2018, there was no doubt the Dolls could deliver a song convincingly when presented with strong material. So it proved on their debut record (and biggest hit) Something Here In My Heart (Keeps A-Tellin’ Me No), which made the Top 20 in early 1968, finally reaching the number 11 spot. With such a good response from their first record, the Paper Dolls look set for fame and fortune. It was reported in the NME that they would be starring in their own television show which would be filmed in colour, a novelty at the time. The show would be about three flat sharing, working girls. This ultimately did not happen and seemed to be mere paper (sorry) talk, but only a year later the first BBC1 drama series filmed in colour was a programme called Take Three Girls, about three women sharing a flat in London, so who knows?

Sent all over the place on a whirlwind of promotional appearances, they struggled match the success of their first record. The album that followed (presented here in its entirety) was recording a hurry and it showed – good performances in Pop and Soul modes but a bit of weaker material too. The Dolls kept working and did a summer season in Bournemouth (show business and UK Pop were separated by a hare’s breath at this time), but the follow up singles did not chart.

Fortunately Phil Wainman, who would later pilot Sweet to great success in the Glam era, believed in them and got the band signed up to RCA. Two good singles emerged in My Boyfriend’s Back and Remember December, but times had changed and they both flopped. Wainman also helmed the great Tiger Sue solo record Burn, Burn, Burn/Tease Me, but by 1972 both Pauline and Sue had left the band. Susie kept them as a working name until 1979, but no further records were issued as the Paper Dolls. Sue recorded two more singles solo before opting for a very successful career in radio, winning two Sony Awards. She also presented Top Of The Pops in the 80s.

This collection brings together most everything released under the Paper Dolls banner as well as the Tiger Sue singles from the 70s. Something Here In My Heart is great, upbeat 60s Pop and they do a nice job on their cover of the Beach Boys’ Darlin’, an absolute treat. Big production Pop/Soul was their forte and although they did tend to MOR on occasion, generally they always acquited themselves well on the album tracks and early singles. The trio could definitely sing, but treat the material with some respect (that is sometimes not that warranted!) with no time for vocal grandstanding. They cut loose though on Ain’t Nothing But A House Party and the mono take of Someday is a smooth and catchy. There’s a version of Paul McCartney’s Step Inside Love, which will allow those not favourably disposed to Cilla, to appreciate the song itself. All The Time In The World is a breezy piece of late 60s Pop, but the covers of Simple Simon and Move Over Darling stray a bit too far into Easy Listening territory for me, even though they are well performed.

The Tiger Sue tracks are fun too, particularly the gently subversive Burn Burn Burn, which is a good pointer to Wainman’s later work. This collection will be a boon for any fan of that positive, heady sound of the Swinging 60s, in its more cheerful and innocent seeking sense. The Paper Dolls never disappointed in their performance and with a bit of luck may have became a more permanent fixture in our charts and hearts.