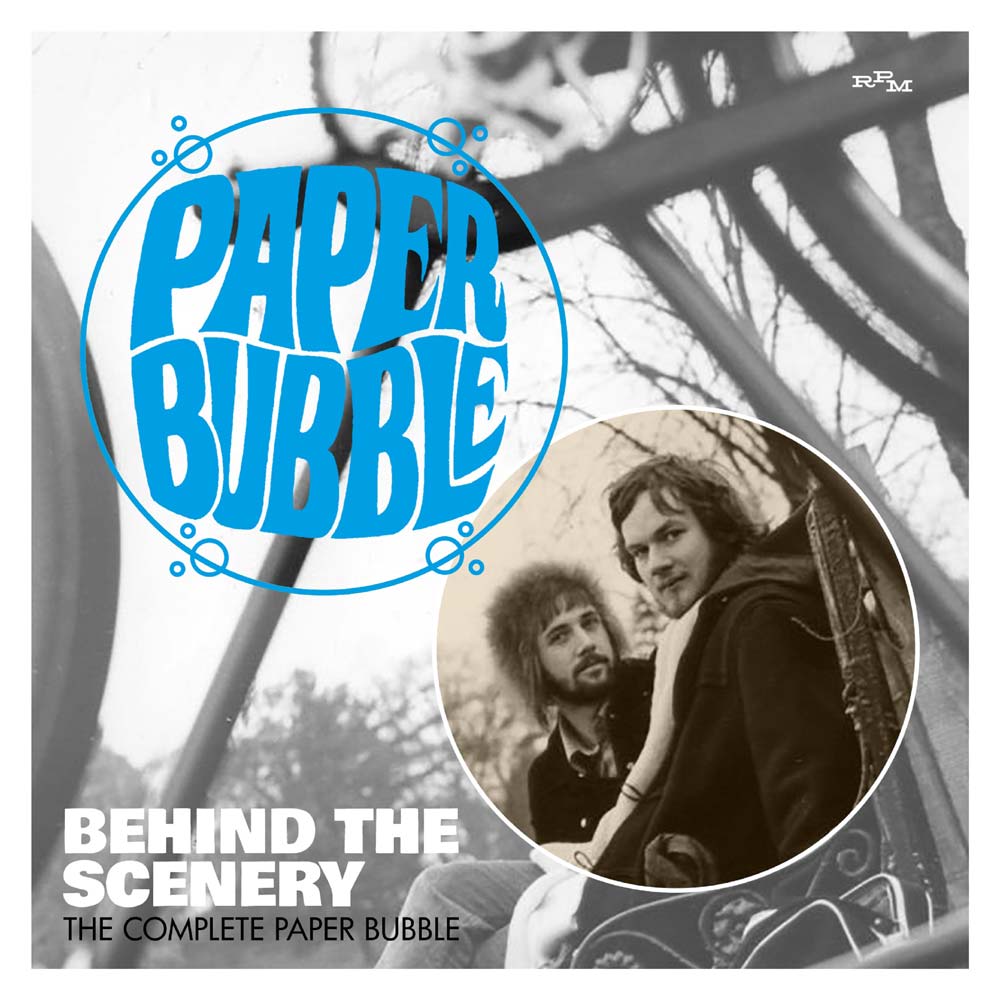 2CD compilation of all the recorded output by the Shrewsbury Folk/Psych duo, featuring their highly-prized debut album, a 1970 unreleased LP Prisoners, Victims, Strangers, Friends, both sides of their 1980 single (as Brian Crane) plus I’m Coming Home (as Brian Crane And Stillbreeze) and some bonus unreleased material from 1969. LTW’s Ian Canty hears the idealistic sound of the late 60s somehow kept alive right into 1981, with early assistance from the Strawbs……

Paper Bubble were the musical vehicle of Brian Crane and Terry Brake, two school friends who grew up living near each other, both acquiring guitars around the time of their secondary education at Shrewsbury School. On leaving that education establishment, the youngsters started to put together a set of covers under the name the Mood. Their own material came together and the two of them took any gig they could, criss crossing the Welsh border, the West Midlands and Yorkshire via the public transport network and lifts from kindly motorists.

Receiving the patronage of a local DJ whose name seems to have been lost over the years, they now had access to recording facilities. The DJ’s auspices also gave them some of their own transport and soon a bass player arrived in the form of Neil Mitchell. The turning point really came though with a gig supporting Folk Rock heavyweights the Strawberry Hill Boys, affectionately known as the Strawbs. After a successful performances by both acts, two of the headliners Tony Hooper and Dave Cousins offered the Mood a production deal. This lead to a record contract with Decca’s “progressive” off-shoot Deram and a change of name to Paper Bubble. The trio plus their newly engaged roadie set off for live shows in a used and unreliable Volkswagen Campervan, but despite this Bubble built a live following and in early 1969 entered the Regent Sound Studios on London’s Tin Pan Alley to make their debut LP.

Though basically having a minimal Folk set-up and sound, it was decided that the “band” format would bring out the best in Crane and Brake’s songs. Session mainstays Herbie Flowers and human drum machine Clem Cattini contributed, as did Rick Wakeman and three members of the band Velvet Opera in Richard Hudson, John Ford and Paul Brett. Also important was orchestral arranger Phil Dennys, who helped Paper Bubble turn their open tuning songs into music via Crane and Brake humming them to him!

Though the recording sessions were fruitful, it was March of the next year before the album entitled Scenery emerged. With the record company making the demand that no single was extracted that could garner radio player (seems highly unusual now but in the Progressive era that was pretty much common practice), it sunk without making a trace. This led to Neil Mitchell leaving the band as it contracted to the core duo again. Even so Crane and Brake were discouraged and wanted to both change their approach and play under their given names rather than under the (seemingly tainted) Paper Bubble banner.

Again the Strawbs came to their rescue with Dave Cousins and Tony Hooper getting them back into a recording studio, this time the Olympic. Ford, Hudson, Wakeman returned and Dave Lambert also sat in, giving them some electric guitar power. It was not an entirely altruistic move though as Cousins has admitted, he was getting this band together to transfer them across into the Strawbs new line up. Despite this, recording went well but Deram weren’t interested and the album Prisoners, Victims, Strangers, Friends stayed in the can until now.

After another setback Brian and Terry returned to the Folk circuit, eventually parting ways, with Crane becoming a teacher and Brake staying on at University. A few years down the line Crane and Brake reunited for a single under the former’s name in 1980 and the I’m Coming Home album a year later (under the name of Brian Crane and StillBreeze). The LP found a bit of the old Paper Bubble magic but didn’t make a mark on a listening public with much different tastes ten years on, so the pair disbanded again shortly after the release. Away from music, both have become authors in the interim. Brian Crane has kept his hand in though with success in India and also has a theatrical project coming up this year called Poppyfields that features songs from the Paper Bubble era, so the name goes on….

What we have here is the full story of the recordings made by Paper Bubble and the “solo” work of Brian Crane that featured Terry Brake (and Stillbreeze). Scenery is still a lovely record – one with all the idealism of the 60s, but none of the cynical tendencies which were kicking in by the end of the decade. They set out their stall with the first track Fillin’ A Gap, with the dreamy acoustic guitars and harmony vocals of Crane and Brake being enhanced by the band orchestrations and finally some sea wave effects. Its lovely, evocative and the perfect example of what Paper Bubble could do. There’s a playfulness about the Psych Pop of Human Being Human and when Energy adds a great horn section piece it really takes off. The strings on the title track Scenery gives it a real atmosphere and there is a slight Country Rock influence on the wry Silly Bit Of Sentiment.

Although not really representative of the album as a whole, Mother Mother Mother would have made a very good single, a fast effort with some smooth Hammond and some freaky guitar licks. A good one for sure and Tomorrow Never Comes brings the album to a close, a wistful Folk number set in a beautiful soundscape.

As bonuses on the first disc we get both sides of the 1980 Brian Crane single Woman/Loving You. While the flip is a pretty but fairly standard piece of Soft Rock, the A side shows hardly a change from the Paper Bubble years. They certainly hadn’t gone “New Wave” like their erstwhile band mates Hudson and Ford (who at the time were labouring under the name the Monks of “Nice Legs” infamy and nothing to do with the classic US band of the same sobriquet). Woman could have easily come from their early archive, nice plaintive Folk Rock.

There are also six unreleased tracks from the 1969 album sessions. Though we don’t have anything here really new, being mostly instrumental takes of tracks from Scenery, it is good to hear the musicianship underneath. There is a cracking bit of fuzzy guitar on the version of Sorry About That (which was to be put down on tape again for the unreleased follow up LP) and the busy Mother Mother Mother sans vocals gives free range to pleasing guitar and keyboard antics. I think I prefer the alternate take of Being Human Being, with more prevalent flute work and a charming “schoolroom piano” coda.

Moving onto disc two, firstly we have the Prisoners, Victims, Strangers, Friends, the album which Deram nixed. On a purely musical basis it is hard to see why the record company didn’t rate it, but the sales figures for Scenery probably did not help. This is (well would have been) a decent second album by Paper Bubble, probably not quite as good as the debut, but not too far away. They had changed tack a little, like on the Music Hall/Blues Rock of Amazon Song and Working Man, a neat speedy Rocker. Though this modernised the band for the changed landscape of the early 70s, they hadn’t given up complete on their previous style. The title track itself is a good piece of swirling Folk Rock and the delicate You’re Feeling Sleepy very pleasant listening too. Probably the pick of this record for me is Strange Days, which features both the Psych/Mod Pop touches and their bright and well sung Folk base.

Next we spin forward 11 years, to the 1981 album I’m Coming Hone, issued under the name Brian Crane and Stillbreeze. Though a bit of a craft of Paper Bubble is still on show, this one is the lesser of the three platters presented here as it sometimes lapses into standard Soft Pop/Rock. It’s hardly surprising it never set the world aflame in a UK Pop scene of 1981 dominated by New Romantics, but this record is not all bad. The strings and acoustic on Marcia feel like a look back to Scenery and Got To Live has some lovely restrained guitar playing. Sleepy is a bit of a duffer though and there are a couple of unexceptional AOR type efforts too. Whoever put the “Kelly Marie Disco pow” towards the end of Getting A Little Love needs a stern word, but they do have a convinced dart at the Korgis’ very soft New Wave electronic style on Alone.

RPM have done a fine job of bringing this all together with both Brian Crane and Terry Brake contributing to the detailed sleeve-notes. Scenery is a peach of an album, but far from being the be-all and end-all of Paper Bubble. Who knows how they would have shaped up had Prisoners, Victims, Strangers, Friends, with its updated sound and approach, had got a release and been a success? Sadly we shall never know but on the positive side we can hear it now, perhaps not in perfect fidelity, but at least we can hear it. The 80s records included have some of the inspiration and it is nice to have them for completion’s sake. Paper Bubble have become very popular with collectors years after they had split up and that debut and the many other tracks included on Behind The Scenery prove they had a touch of class that set them apart from the herd.