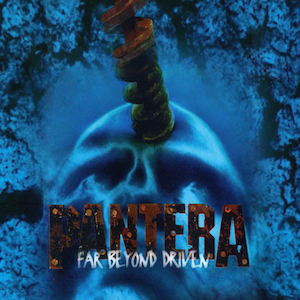 When Far Beyond Driven was released some twenty years ago, it made history by landing in the American Billboard Chart at number 1. It was historical because it was the first extreme metal album to do so. Does the reissue of this landmark album still stand up? In short; yes.

The album still sounds completely ferocious and fresh. The groove and swagger throughout puts many a band to shame. The opening 1-2 of Strength Beyond Strength and Becoming come at you like a juggernaut. The former has many thrash elements where the latter sees the band having the same intensity through some shrill work from the legendary, and still sadly missed, Dimebag Darrell on guitar. 5 Minutes Alone and its churning, repetitive riff still stands as one of Panteras best moments; it is a really good head banger of a tune. The solo work towards the end of the track, before a return to the same riff ensures that the journey there and back is a good one.

If there is any dispute about 5 Minutes Alone being one of Pantera’s greatest moment, there is less debate over I’m Broken. The massive, rolling riff is still utterly joyous 20 years on – a bona-fide Pantera classic.

Alongside classics such as 5 Minutes Alone and I’m Broken, there is Use My Third Arm, which is still a juggernaut of a track. The guitars at the start of the track almost veer into black metal territory. Throes of Rejection’s bass led opening is another slab of crushing southern sludge. The bass and drums really drive the track here, with the guitars adding the colour to the canvas. Far Beyond Driven is closed out with a trippy rendition of Black Sabbath’s Planet Caravan.

Whilst the album is worthy of revisiting after twenty years, the extra material here is comprised of the band’s 1994 show from the Monsters Of Rock festival. The show is a reminder of the incendiary performances that the band would deliver. I never got to see Pantera myself, but from footage I have seen and hearing this release, it really conveys the band’s power. The groundbreaking Walk, the epic This Love, and Pantera stalwarts, Mouth For War and Cowboys From Hell are all represented. The live set shows the band in all their glory but it’s the bombast from Phil Anselmo that stands out here. Anselmo has garnered legendary status for his performances with Pantera and later, Down. He still packs the same punch 20 years on from here; and this was a time when he was a lot more volatile.

The deluxe reissue of this album is another in a long line of reissues; sometimes it can feel like the music fan is being ripped off with countless lots of ‘unheard’ material – if you’re a fan of Pantera or hard rock this release will tick all the boxes. It contains a fantastic studio album along with a stunning live set that cherry picks from Pantera’s other back catalogue work. A worthy addition to the deluxe ranks.

All words by Dom Walsh. More articles by Dom on Louder Than War can be found on his author profile.