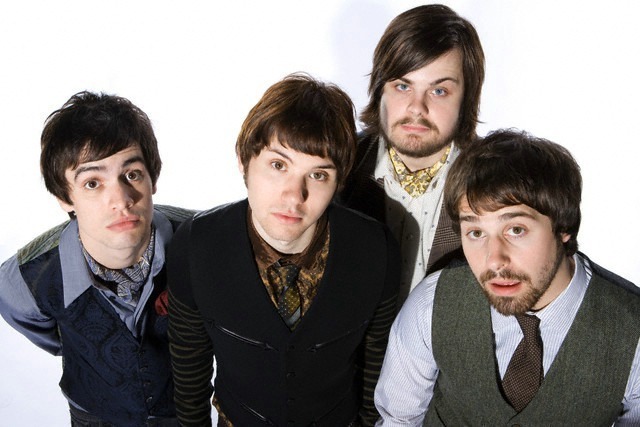 After storming towards the top of the charts with emo-addled anthems, Panic! At the Disco dropped their punky tendencies – as well as their exclamation – for the Beatles-drenched pop of Pretty. Odd. Now ten-years-old, Sam Lambeth reinvestigates.

Brendon Urie has always been something of a musical chameleon. When he was 10-years-old, he’d spent his days flitting between a homemade drum kit, a baby acoustic and the family piano, trying to figure out the chords to songs he’d just heard. Despite this, his band Panic! At the Disco’s debut album, A Fever You Can’t Sweat Out, strictly followed the emo formula laid down by punk-pop peers Fall Out Boy. There was no real sign of shaking conventions.

That was, however, until the conception of their second album. By 2008, the infectious but occasionally infantile world of pop punk (think long, Smiths-indebted song titles, colourful costumes and vaguely graphic novel names) was beginning to peter out. Urie and the rest of the band, anchored by raffish guitarist Ryan Ross, had already got their second album in the bag, but on the eleventh hour began to feel tinges of uncertainty. A new track had just been written by the gang, and it was one that was getting stuck in their heads. The song? Nine in the Afternoon.

Buoyed by pounding pianos, weeping strings and bouncing drums, Nine in the Afternoon betrayed PATD’s previous output. However, its promise led to the band – now firmly in the direction of Ross, who was keen to indulge his long-held love of British bands such as The Beatles and The Kinks – booting their sophomore LP into the distance. Instead, they began crafting a concept collection fully versed in the theatrical rock of Ray Davies, the string-laden loveliness of Lennon / McCartney and the sun-drenched delights of Brian Wilson. If fans weren’t upset enough, the band then dropped the exclamation mark from their name, a move so mourned by the media it entered a book of grammatical world records.

The risk paid off. Nine in the Afternoon gave the band widespread credibility, not just from hitherto hesitant musos but also the general press. Richly textured, bursting with Beatles-esque melodies and carrying intriguing undercurrents of psychedelic bombast, the paisley-splattered splendour of Pretty. Odd. was a glorious anachronism from a band that had everything to prove and nothing to lose. Second single That Green Gentleman (Things Have Changed) was replete with rollicking riffs and fuzzy introspection, Behind the Sea had the sunburst strut of Revolver and She’s a Handsome Woman has a Kinksian off-kilter riff that’s as ramshackle as it is riveting.

When the band slow things down, it’s equally as thrilling. Northern Downpour is a twinkling acoustic lament, propelled by wistful piano and Ross’ melancholic backing vocals. Do You Know What I’m Seeing (“I know it’s sad that I never gave a damn about the weather, and it never gave a damn about me,” Urie sighs) has the kitchen-sink supremacy of Sgt. Peppers, while She Had the World showed all of the band’s songwriting prowess.

While there’s no doubt the Atlantic Records’ accountants probably gasped themselves into early graves upon listening, Pretty. Odd. showed Panic at the Disco were more than just a mid-afternoon event at Reading. However, this newfound zeal for the past didn’t remain – with Urie wanting to pursue more pop-orientated turf, Ross left to form his own anachronistic band, The Young Veins.

Since then, PATD has whittled down to just Urie, now ploughing a very curious, diverse and dextrous furrow. While there’s none of Pretty. Odd. left, the latter did show glimpses of the singer’s restless creative mind.