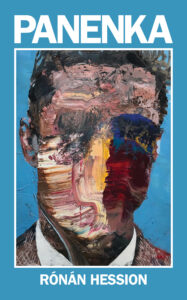 Ronan Hession was originally a musician with some success back home in Ireland before turning his hand to novels with Leonard & Hungry Paul.

His gentle tale of two outsiders bonding over playing board games was a surprise sleeper hit with bibliophiles responding to a funny and moving book about the virtues of simple decency, mercifully free of the tiresome Oxbridge cynicism that blights so much contemporary fiction.

So the pressure was on for his second Bluemoose release, Panenka, which is an edgier affair about how one very public humiliation can ruin a life, and have a devastating ripple effect across generations.

Panenka is a former professional footballer in a small unnamed football mad European town who has shut down after that event a quarter of a century earlier and finds out he may have limited time left to find himself again. His depression has undermined his relationship with his daughter Marie-Therese struggling to connect with this semi-stranger, and his beloved seven year old grandson Arthur, who both live with him.

His only solace is visiting a rundown bar where he observes the bickering of regulars Baba and Anthony, who are perhaps the nearest thing to Leonard and Paul, but with added spite. But just as all seems bleak along comes hairdresser Esther who might prove to be Panenka’s salvation if he will just let her.

Hession has a gift for making the mundane mean something, and whilst his latest story is tougher he is still exploring family, loss, grief and things that are all too often left unsaid.  It’s not as dryly amusing as his debut but just as human in celebrating people’s foibles.

He also writes beautifully about the power of football in a town where the people’s game is king and explores the nature of being an obsessive fan, minus the usual sneering you get about sport in literature.  It’s as good on the world’s most popular sport as Fever Pitch was, and former goalie Albert Camus would be proud of this diehard Watford fan.

What Hession brings to his work is a songwriter’s sensibility, so his novels feel like a long song as he returns again and again to the damage humans can cause when they can’t – or won’t – be honest with one another, or themselves. The relationship between the taciturn Panenka and his daughter is one any father can relate to as they dance around their feelings.

Panenka represents a step forward in this talented writer’s career as he is much more confident in weaving together a number of storylines into a coherent whole that leaves you wanting to know more about this motley crew. Fans of his debut have been sweating that this might be the literary version of that difficult second album, but they needn’t worry as Hession has struck this one sweetly into the back of the net.

You can pre-order Panenka via https://bluemoosebooks.com/books or any independent bookshop.