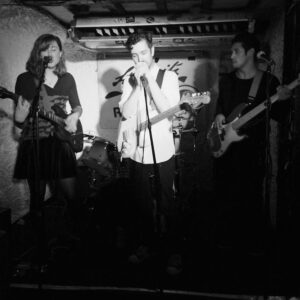 Fast and frenetic is just one of the ways that Louder than War’s Ioan Humphreys can describe Pamphlet.

I don’t know much about Pamphlet as they very politely accosted me on Twitter. But for that I am eternally grateful. Having looked into this gang of reprobates, I have subsequently discovered that they met in Tooting and now live across London and Brighton. Pamphlet are Rem (drums), Gord (bass), Joely and Tom (both vocals and guitar) and together they create a joyous noise that puts them in the forefront of current post punk outfits around at the moment.

Schezwan Sally is the title of their debut EP released last week and You’re a Stranger is the lead track off it. Starting off with an insistent guitar and throbbing bass combo, the vocals follow on pretty quickly. There is a lot to fit into this 2.27! The joint vocal duties work brilliantly as does the bluesy guitar soloing that runs through the first half.

The track has a very grungy feel to it, but that is by no means a criticism. The heavy throb is very enticing and the vocal deliveries are just great.

The track has a very ramshackle 100mph feel to it that reminds me of Royal Trux at times. It’s well produced, and is 2.27 of unabashed rock and roll. So what is wrong with that??

This won’t be last we hear of Pamphlet I guarantee you. Great stuff.