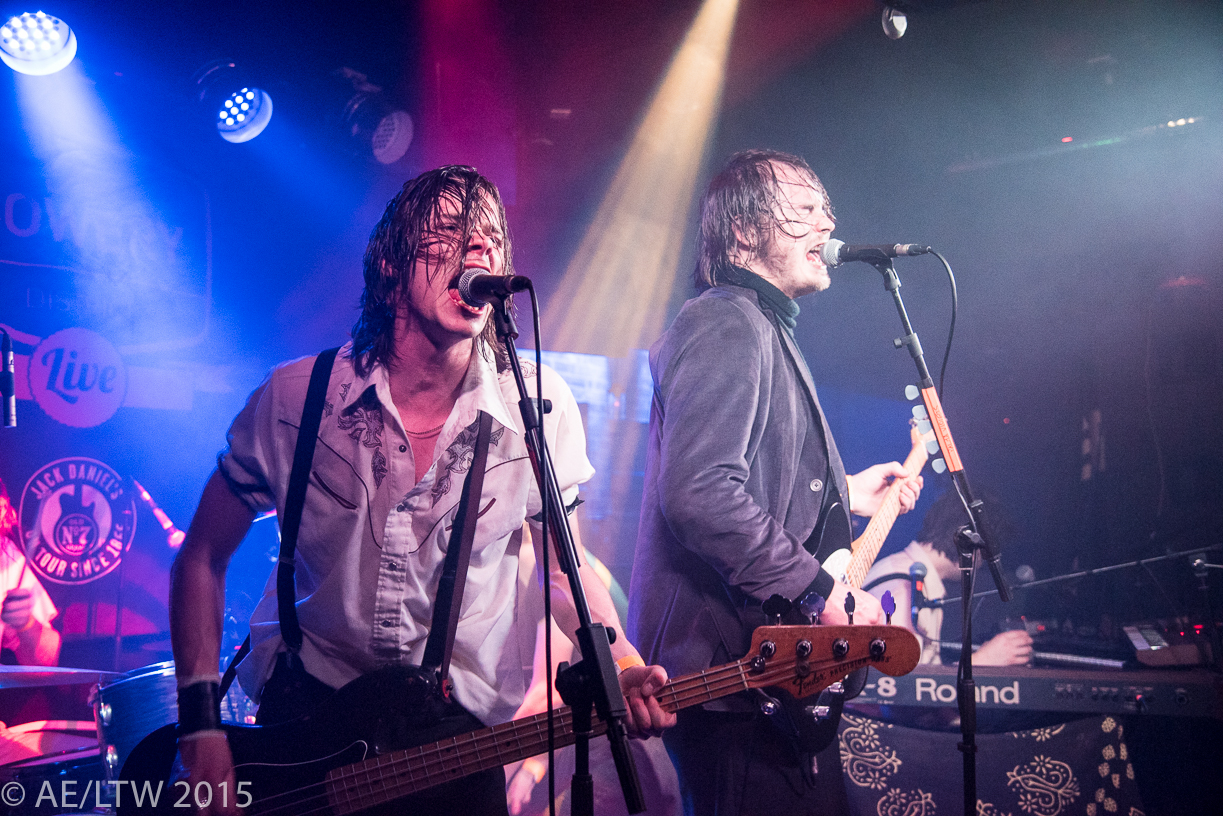 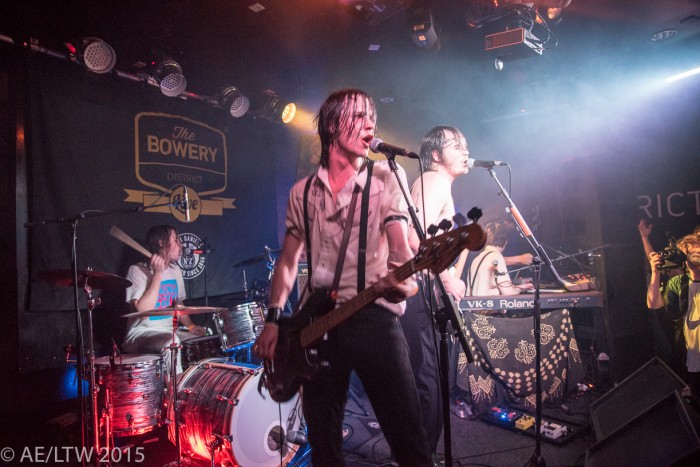 Palma Violets complete a short UK tour in support of their second album due for release next week.  A typically raucous performance in front of a similarly raucous crowd in an intimate atmosphere adds up to an excellent evening’s entertainment for everyone present.

Palma Violets hail from Lambeth and were formed through a musical partnership between Sam Fryer (guitar and vocals) and Chilli Jesson (bass and vocals). Their debut single “Best Of Friends” won NME’s best song award in 2012 and since then the magazine has given them strong backing, raising their public profile enough for them to win a slot at the 2014 Reading and Leeds festivals which is where I first saw them.

Palma Violets were part of the NME Awards tour in 2013 and 2014 where I caught their show at Portsmouth’s Pyramid centre. Of course, being part of the awards tour is useful in terms of exposure but with so many bands involved, the sets are typically only around 45 minutes so they didn’t get the opportunity to fully showcase themselves.

So I was only too happy to grab my camera and jump in the car for the 80 mile drive to Reading’s Bowery District to catch the Violets in a small venue. Having seen them at a festival, a mid-sized venue and now a small venue I was interested to see how they made the adjustment and worked the crowd across the three. I was also looking forward to hearing how the material from the forthcoming album “Danger In The Club” (released on May 4th) went down with the punters. 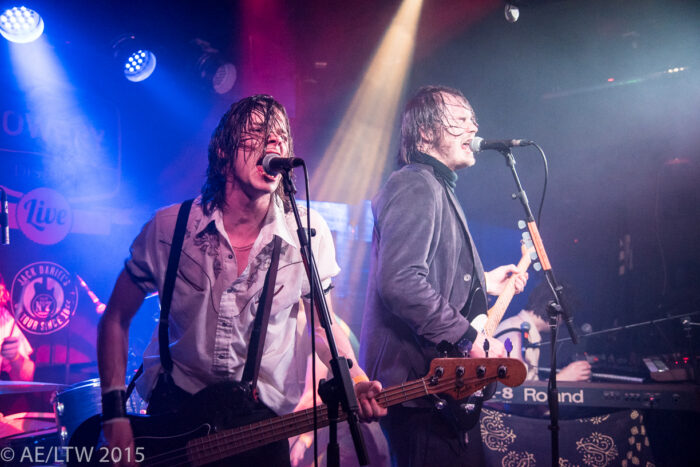 The venue is an interesting one, a sort of nightclub masquerading as concert venue, very oddly shaped and a tiny little stage, however the sound was great and the lighting reasonable. Like many venues these days the Bowery has moved to halogen lighting which does make photography difficult.

Palma Violets were supported by a band I had not come across before, Ming City Rockers a very good four piece drums, bass and two guitars. They bashed out a 30 minute set of good old fashioned loud and energetic ‘hair’ . I thoroughly enjoyed it.

Palma Violets hit the stage at 9.30, 15 minutes later than their advertised time. From minute one it was clear that the Violets were up for a rocking good time as they laid into “Secrets Of America” from the forthcoming album Danger In The Club. As the evening progressed the band treated us to seven tracks from the new album with the rest of the 16 song set coming from debut album 180 with “Step Up For The Cool Cats” and “Three Stars” the only tracks not getting an outing from that album.

Palma Violets have a great connection with their audience which consisted primarily of people in the 16 – 24 age group. I love the looks I get when I know the words to most of the songs and sometimes feel like getting on stage and telling the kids that my generation invented this music and that we are not too old to enjoy it until we are dead. Over the course of the evening both Sam and Chilli joined in with the crowd surfing that seems to be the norm at gigs these days. I don’t get it myself as whilst you’re doing that you’re missing the gig, but whatever. 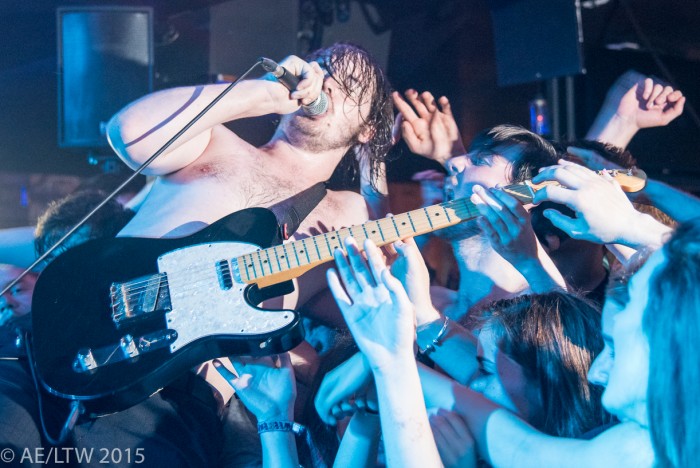 The energy on stage was certainly matched by the energy in the crowd. Everyone seemed to know their way through all the old songs and enjoyed the new as well. The small stage size created a few problems as mic stands went flying and the sense of mayhem was only added to by the road crew trying to sort out the mess whilst climbing over the band and the two videographers who were trying to shoot the show for a live stream.

Make no mistake, Palma Violets are the real deal. They really do remind me of the kind of rock music that I grew up with. They have the energy and attitude of the bands of my youth and would sit comfortably amongst the likes of Stiff Little Fingers, The Vibrators and The Membranes. They’re most certainly a band I’d be very happy to get out to see any time.

One final point I’ll make to be fair it isn’t necessarily directed at Palma Violets though it does apply to them. Tonight’s set ran for 63 minutes, including the time they spent off stage before the encore. Why is it that a 63-year-old Bruce Springsteen can play a set running to four hours and six minutes (Helsinki 2012) when bands a third his age can only manage an hour?

One hour sets seem to be the norm for many bands at the moment and, whilst I understand that they don’t have the back catalogue that some like Springsteen has to draw on, frankly it sucks. Surely any band worth their salt can put a 90 minute set together even if it includes a cover or two?

The Palma Violets are also supporting The Vaccines throughout their ten UK dates in November. Find details at The official Palma Violets website or on their Facebook page. The band can also be found on Twitter as @PalmaViolets.