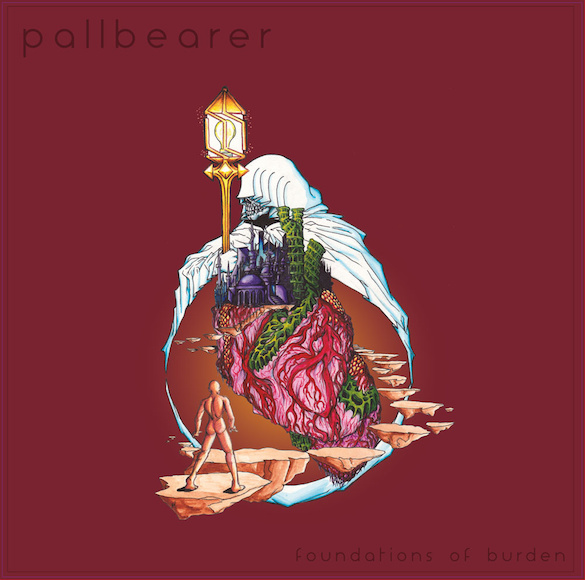 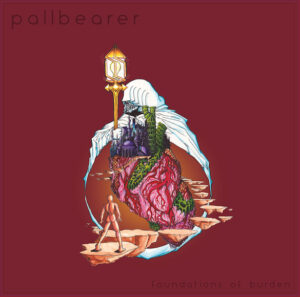 If you only listen to one doom album in 2014 Louder Than War’s advice is to make it Pallbearer’s Foundation of Burden. Dom Walsh tells us why…

Formed in 2008 in Little Rock, Arkansas, Pallbearer’s second album is steeped in expectation after the success of their debut full length, Sorrow & Extinction. Like its predecessor, Foundation of Burden has a handful of tracks that are lengthy and epic in every sense of the description.

World’s Apart is a glorious opener. The guitar tones throughout are spectacular with an unadulterated doom tone and tempo punctuated by fantastic melody. The rhythm twists and traverses with vocals that reach for the sky. Second track, Foundations, has a harder and denser edge than the opening track but the tempo is still slow and trudging. The guitars and bass are confrontational throughout, with a more melancholy melody in play. For the first time in the opening throws of the album, the music breaks into a harmonic section before the confrontational guitars get less fuzzy and begin to sound a lot warmer.

Watcher in the Dark opens with a mournful guitar line which teams with another guitar to heighten the misery. The slow pound of the drums adds to the mood as the ten minute myriad of a tune builds into another massive slab of epic and progressive doom. The more distinct soloing, although low in the mix of the crushing rhythm, adds plenty of diversity to the mix. Around the six minute mark it feels as if the track should fade out, however in true doom nature, the track continues to travel down it’s despairing path to an epic conclusion with the rolling bass line being the driving force. There is nothing subtle about The Ghost I Used To Be; the next track in Pallbearer’s epic opus. Crashing straight in with distorted guitars and crashing drums, there is almost a retro rock feel with the riffs that adorn many sections of the track. There is more than a whiff of Candlemass here, but to an extent where Pallbearer deliver their own stamp on it. The closing melody drips in melancholia to finish another fine composition.   Ashes provides an interlude that shows the grace and light that the band can bring to their sound. The Hammond delivered melody is lullaby like in style, whilst the guitars and drums keep the tone of the album perfectly. Album closer, Vanished, adds more fuel to the bands flame as purveyors of some of the finest doom metal around at the moment.   Where Below went straight for the Candlemass flag and waved it furiously, and Pilgrim came up short; Pallbearer have delivered a superb doom metal album. Littered with fine melodies and subtle hints of light, this record is by no means soft. There are many moments across the sprawling tracks that are as hard as nails, which will allow the band to appeal to many more metal fans than just the doom metal fraternity. Across the piece there is a certain transcendence that makes this album one of 2014’s must listens; and as for those lofty expectations…consider them suitably met.

Pallbearer have a handful of shows coming up in the EU later this year, side by side with YOB. To say we’re on the edge of our seats with excitement about this is a bit of an understatement. Full details here with the UK dates below…

All words by Dom Walsh. You can read more by Dom on Louder Than War at his author’s archive. Dom also tweets as @bwfcdom83.