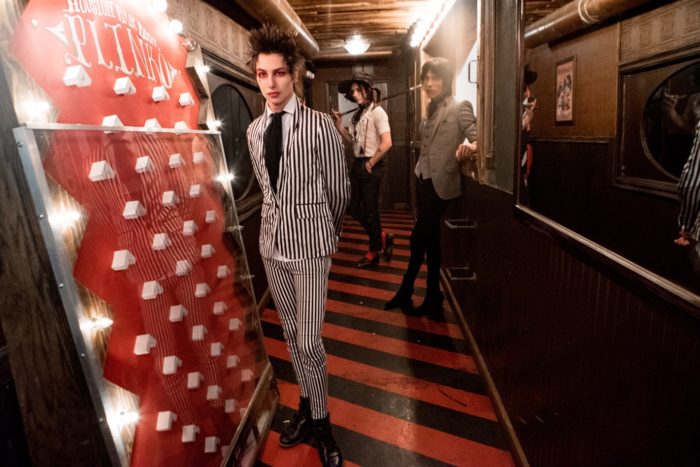 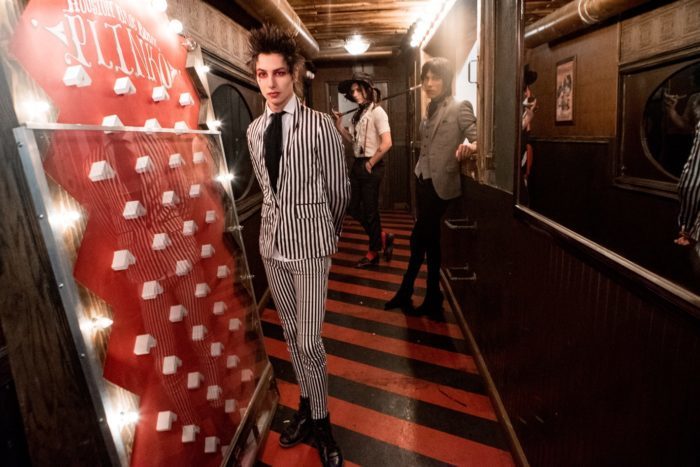 Palaye Royale never fails to nail each performance of their visceral punk rock n roll. Delivered through dirty guitar’s, feisty shows and an abundance of multi-layered firecracker records. However, it has not been a case of overnight success. Hardship, hard work and determination, has brought them a lot of attention, although not all positive.

Louder Than War caught up with Palaye Royale’s Emerson Barrett, Remington Leith and Sebastian Danzig at Manchester Academy prior to the second date of their tour.

We are in one of the newly refurbished Manchester Academy dressing rooms. A clear blue Manchester sky fills the room with light, as the three Palaye Royale siblings make themselves comfortable on the rooms red pleather sofa’s. Having recently completed seven dates in Europe and playing their first Scottish gig the night before and with introduction out of the way, we talk about how they’re enjoying this tour so far?

Sebastian: It’s been great. It’s kind of our first-time touring here and everything sold out, so we were like shocked as fuck. We have no idea why or how that happened. Because coming over here was like a risk and we didn’t know what to expect. We’ve never opened for anyone in the UK or in Europe before for that matter.

Remington: Before it was just ourselves.

Emerson: Plus, meeting everyone as well, having face to face conversations, it’s really nice actually meeting our European fans because they are much more mature. There was a 15-year-old boy yesterday that we spoke to like an adult. I think your culture is a bit further along than America, that’s cool. 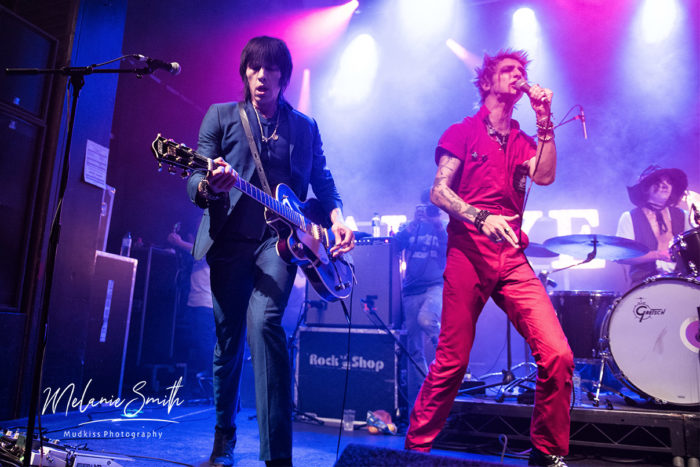 LTW: Do you think Slam Dunk and how great those shows were had an impact?

Remington: I think they added to the hype, got people a bit more excited so they contributed. But I think we are much more of mystery over here. People are curious to come out a watch us. In the States, we have toured around so much there, people kind of know what it’s about and they’ve seen us. I think that’s why these tickets sold so fast.

LTW: Unfortunately, it hasn’t all been perfect. KOKO unexpectedly closing must have been hard to hear?

Sebastian: It felt shitty. We left Vegas, getting on a plane to head off on this tour that was leading up to our biggest headliner. It was our manager who called us and was like KOKO’s cancelled. I was like are you fucking kidding me, we sold out KOKO and now its cancelled? We felt kind of bitter about it at first. But then it was like right okay and you think about, what was it the Apollo, when the roof collapsed, and you don’t want that.

Emerson: And we are a loud band.

Remington; And I definitely love to get up somewhere.

Sebastian: The thing is we were so pissed because there were all these kids who were going to fly in from all around Europe: Russia, the Ukraine, Norway and Sweden. They’d booked these flights to come to see the show and they were losing thousands of dollars because they now can’t see the show. So, we just decided to throw a free acoustic show outside KOKO – we will probably get shut down. But the whole idea was that we could show how super thankful we are that people were coming out for us and we want to make the day memorable for them. Now we have the Electric  Brixton, we have three hundred more tickets available, so we might not sell out, but we are getting close. People have said you can come back and do KOKO next time and we were like heck that’s not the point, but it has worked out well because we know everyone’s safe. Well, hopefully, if there are no riots outside KOKO.

LTW: Could end up being an iconic event.

Sebastian: Well you know, when we were in Amsterdam there was a swarm of people entering the venue and they were louder than our amps and the PA: so, we were like after the gig we will meet all of you. Afterwards, the venue just wanted us the fuck out. So, we ended up on the streets, five cop cars turned up and it took three hours, but we met everyone. It was really really cool and a real moment for us. We are as thankful for them as they are for us and really it is not contrived.

LTW: Well it is a question that could come up. Is what you do all from the heart?

Remington: We could only put out things we actually believe in. Because I think that is the whole point of music. If you are not doing it from within yourself there really is no point. We actually had to review this record (Boom Boom Room Side B). The first time we hear it – it just didn’t feel like Palaye and we weren’t getting our point across. We won’t ever put anything out just because we think it might do well or this is what’s going on now. We will only put out art that we believe in and truly came from us.

LTW: It feels quite a melancholy album.

Sebastian: Well Side B is a conclusion of what Side A was. These songs are from a point in our lives when we had no record deal, we weren’t touring and conceived before we even had any fans.

Emerson: We were homeless a few times, so if your homeless and have got nothing.

Sebastian: People have said oh your writing pop songs on this record, but it’s just how they came out, we were just getting straight to the point.

Remington: You can be the ripest peach in the world, but some people just don’t like peaches. We really just don’t give a fuck.

Emerson: The only important opinions are the fans and the artist, I think the voices of the media really don’t matter.

Remington: Everyone thinks the world should be a certain type of way. I don’t care if some 40-year-old guy at a desk, who wouldn’t ever go to a show, doesn’t give a shit. It’s the kids that it means something to that matters. That’s what I care about, the way the music infects someone the way it infected us.

Sebastian: We made this music for ourselves and our fans. It’s music for a whole new generation and we’ve seen this family, our fan base, The Royale Council out there making friends, building this group. It’s powerful.

Emerson: That is the joy of living in an age when technology is so important. Things like us doing the pop-up show outside KOKO before we would have had to plan through agents and press. Now, it is one tweet.

Sebastian: We wanna give everyone a hug, smoke cigarettes and do shots with people not sit behind a desk and sign a bit of paper. 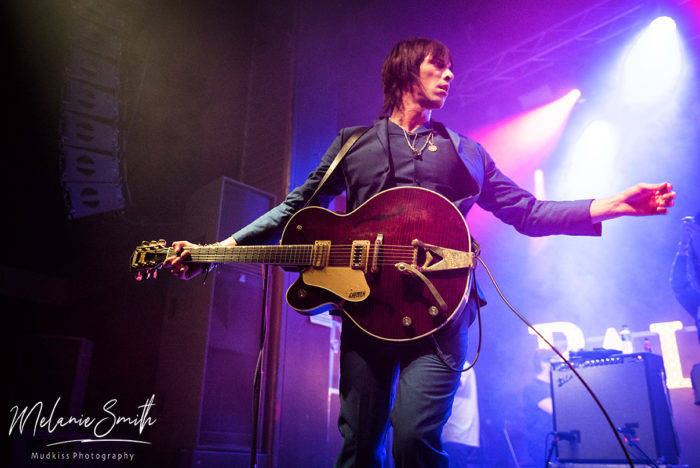 LTW: You do have a near barrier-free connection with people, particularly over social media. As the number of people, who love your music and want that personal connection. grows it is going to, ultimately, get to be too much.

Sebastian: It is getting to the point of overload now. I used to be able to scroll back a couple of days now it’s only an hour.

Emerson: I am working on a comic book for the band, I’m doing this with one of our fans. We created this secret club and we are recruiting artists to take part in creating a whole new word. It is so important to give just a second to look and see how profound each one of these kids are. You can pick them out and together create something new.

LTW: So, with the fans, you are really establishing inclusive and active elements.

Sebastian: That’s the great part of social media we can keep the connection but face to face it is way more personal. In Amsterdam, we were at one point surrounded by like 800 people and I was asked are you scared? I was like no they respect us, and we respect them, if one person fucks up, it fucks it up for everyone and people known that.

LTW: Okay, The Finale Boom, what is that about and what is coming after it?

Remington: That is for the world to … wait and see.

Emerson: The Final Boom is the last chance to hear Side A and Side B.

LTW: So those songs won’t be played live again?

Sebastian: Well, there might be three or four we do (play) from these records.

Emerson: There are a lot of things we won’t do after this tour.

LTW: Well I better ask now then, who are James and Pierre?

Remington: That’s really funny, my roommate would be loving this right now. Well, James and Pierre are my friends’ dogs. One is a golden retriever and one is a little wiener dog.

LTW: Well I’ll listen to Dying In A Hot-Tub somewhat differently from now on. So, the news has just broken that you are supporting Enter Shikari on the 2019 UK part of their tour.

Sebastian: That tour is going to be so interesting, are you going?

LTW: I hope to do five dates, I wish I could do more.

Sebastian: It is a huge tour.

Emerson: I know we are going to hit a few markets that are just going to hate us but fuck it

Sebastian: When we go on stage we are a different band than we are on record, we are more aggressive on stage, probably because we’ve toured with so many metal bands.

Emerson: We have a very specific show for the Enter Shikari tour, it is going to be different.

Sebastian: It’s kind of what we do normally on stage but … more.

Remington: Playing tours, when you are a little out there, well you have to prove your worth. You have got to put on a great live show because if you don’t you’re going to get eaten alive. We hope to turn some people’s opinions around and I like that.

LTW: I think it’s an exciting pairing; however, it hasn’t been welcomed by everyone.

Sebastian: I am really looking forward to it. They (Enter Shikari) like us have the final shout on who they bring out, and they wouldn’t bring us out if they didn’t see our worth. It is all good, we get to come back to the UK see more places than we ever have before. Three brothers travelling the world.

Palaye Royale will be supporting Enter Shikari on their UK Tour from January 10th 2018 at the 02 Academy Sheffield and continue as follows:

Interview by Katie Clare. More news, reviews and articles by Katie on Louder Than War can be found at her author’s archive. Katie can also be found on Twitter where she tweets as @tokyo_katie.

Live photos by Melanie Smith. More work by Mel on Louder Than War can be found at her author’s archive. You can find her on Facebook and Twitter. Photography portfolio can be found here