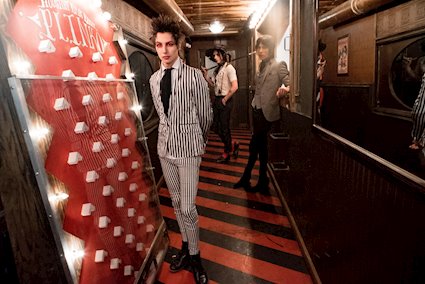 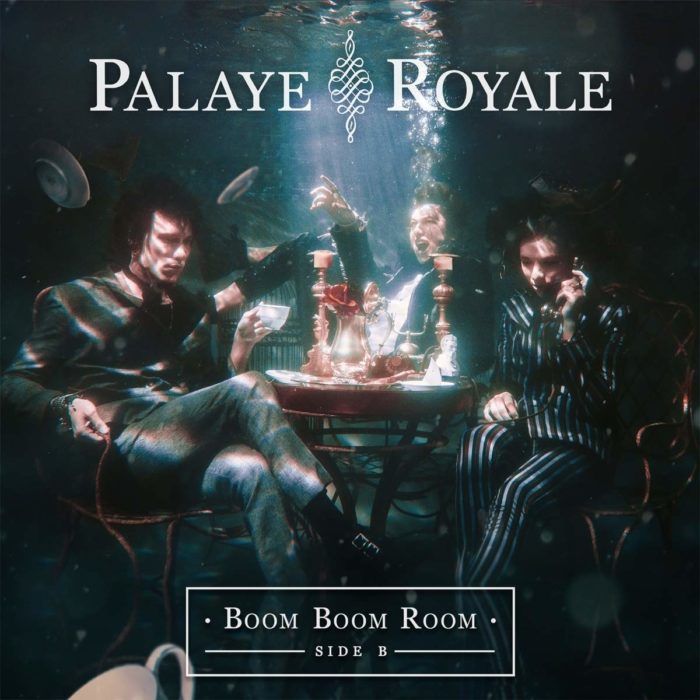 Las Vegas-based Palaye Royale are Remington Leith, Sebastian Danzig and Emerson Barrett, three brothers originally from Toronto, Canada (to be specific). Becoming the first unsigned act to win the MTV Mad March Award in 2014 and, displaying staggering levels of commitment, Palaye Royale, have toured relentlessly since. Their exhilarating live shows have gained them a fast-growing fanbase (the loyal and dedicated Soldiers of The Royal Council) and in 2016 they delivered an exciting debut album, Boom Boom Room (SideA).

It’s 2018 and Palaye Royale continue to add to their numerous accomplishments, including thrilling everyone who saw them at this year’s Slam Dunk Festival, completing the final Warped Tour, as well as recording and now releasing their sophomore album, Boom Boom Room (SideB). So how is it?

Taking a dynamic leap from the start, the album opens with Death Dance. The track explores the negatives of modern society and the conflicting conventions it enforces. Our battered self-image, our incapacitated mental well-being and the damaging escapes from these destructions we utilize, are explored within the lyrics. In the first three minutes, Palaye Royale has sliced through any expectation they’d journey down some cute and saccharine pop-rock/pop-punk course with Boom Boom Room (SideB).

While, less complicated than the album’s opening, Teenage Doors of Heartbreak, fires up the adrenalin from the opening riff. It’s irresistible melody, brash, dynamic rock and exhilarating harmonies build in intensity and display enviable polish. Sebastian Danzig’s guitar work here and throughout the album is outstanding. Consistent both from the viewpoint of lead and rhythm – with eruptions of melodic intensity precisely when they’re most desirable.

You’ll Be Fine returns to discourse about mental individuality, presenting a perceptive look at how unconventionality is often viewed negatively. Emerson Barrett pounds a deliciously enchanting rhythm of vibrant impulsiveness and Remington Leith’s vocal intonations enchant, dangerously offsetting any misgivings, even when his lips impart on the darkest of subjects.

It is not entirely the case, as you might expect with Palaye Royale, that the louder and more frantic, the better they get: although live let’s keep it hot and heavy. However, Dying In A Hot Tub, Mrs Infamous and to some degree Hospital Beds show a more complexed style, rather than relying on only an impassioned delivery. Mrs Infamous, particularly addresses the contradictory emotions of vulnerability and ruthlessness contained in relationships, with a multifaceted shrewdness.

Love The Void is both an analytical exploration of life and love and an uninhibited affirmation of both, that sweeps you up in its frantic turbulence. Ending the album on Love The Void’s high energy would have been an apt option. Palaye Royale, however, decided to deliver, The Boom, a philosophical narrative that provides plenty of notions to fuel late night conversations and sleepless ponderings: it is an exquisite and unexpected addition.

With such a significant amount of demonstrativeness bestowed, it’s hard for a little cynicism not to creep in. Are Palaye Royale authentic outsiders and do they really understand what it is like to be one? Surely, the words ‘calculated strategy’ aren’t really flickering in my peripheral vision, well, being optimistic I’m prepared to ignore them if they are. Also, the brevity of Boom Boom Boom (SideB) raises an eyebrow, eight songs in under thirty minutes – mmm. At the end of the Sex Pistols’ 1978 U.S. tour, a jaded Johnny Rotten queried “Ever get the feeling you’ve been cheated?”, well, should we? Or is the attention span of the average Millennial or Alpha Generationer so transitory that this level of conciseness is necessary? It is too easy to get caught up with critiquing for the sake of it and in the case of Boom Boom Room (SideB) doing so would be at the cost of missing out on the enjoyment of its thrilling melodies, powerful rhythm chords and contagious high spirits within.

As Palaye Royale are, clearly talented and stylistically blessed, so it’s not difficult to believe that they will continue to create and evolve. Artistically taking the nuances of melancholy and malevolence that are found in Boom Boom Boom (SideB), holds tremendous and astonishingly explosive potential, should they take that route going forward. Time will, of course, reveal their choices. For now, however, we are here, at the conclusion for Boom Boom Room (SideB).

Boom Boom Boom (SideB) is not pioneering new genres, however, there are some electric amalgamations of rock, pop and post-punk along with a distinctive Palaye Royale-esqueness that is devilishly enthralling. While, collectively, their harmonies, palpitating rhythms, pure exuberance in their music and in how they share that music, makes for a distinctive, spirited and special experience.

Boom Boom Room (Side B) is released via Sumerian Records on 28 September 2018.

Please note: The album’s length is reflected in the price set on retailers such as Amazon and iTunes and is available for pre-order from both now.  Various pre-order bundle options are also available from Palaye Royale’s offical store.

Tickets available via the usual retailers, We recommend Twickets for fan to fan ticket buying and selling at face value or below.