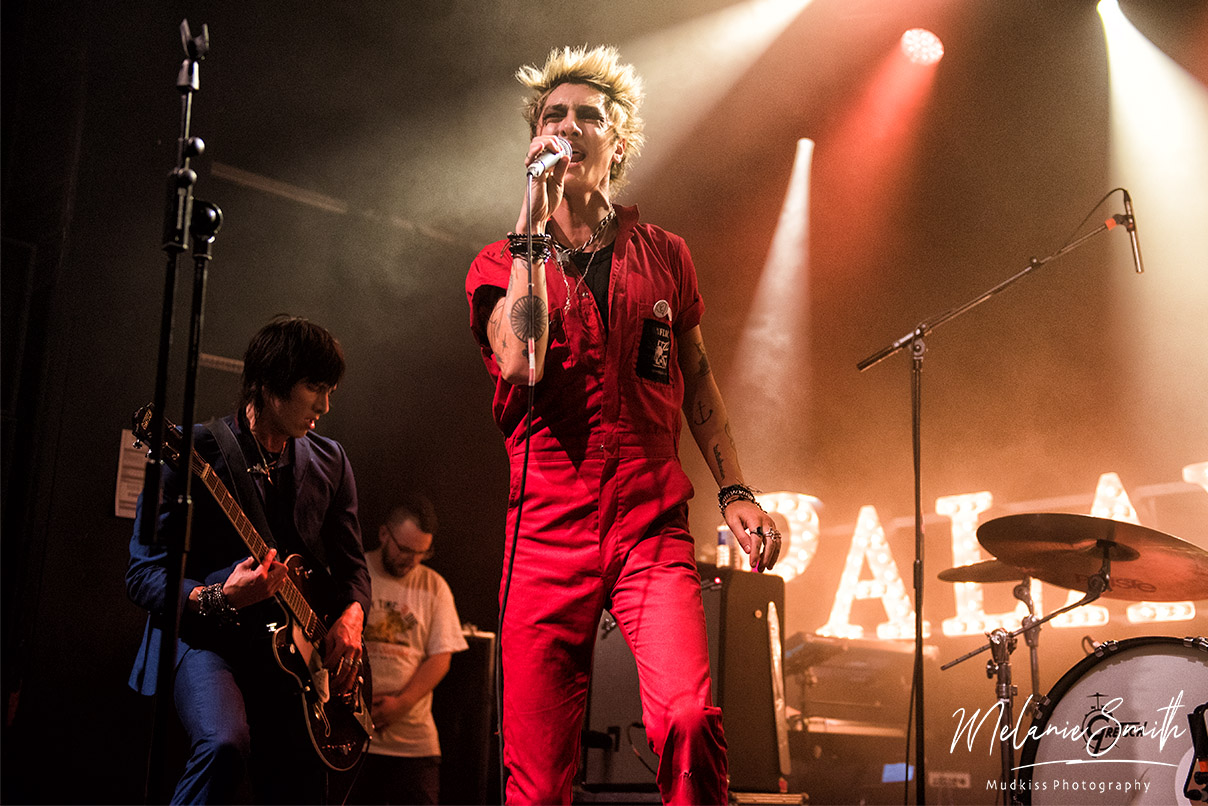 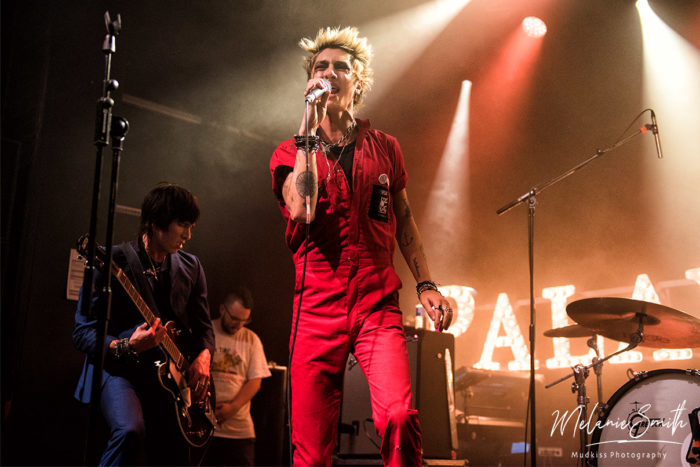 Palaye Royale’s sold out first UK headline tour has been filled with many highs and lows. The three date tour included Palaye’s first Scottish show, Manchester’s venue was upgraded after the first sold out in days and after KOKO closed for emergency building work they had to reschedule the date and venue (details here). Louder Than War was fortunate to also catch the band for a chat at their Manchester show and hang out for the show.

The busy functions of Manchester student’s union, in which several of the Academy venues are housed, continues around a long queue of excited souls waiting as the sun slowly fades. Palaye Royale, who are Sebastian Danzig, Emerson Barrett, and Remington Leith, have at various times during the day been taking in the building, the surrounding area and visiting their fans in the queue, taking pictures, signing items and chatting. Palaye Royale also held a pre-gig acoustic set and Q&A session in Club Academy for a select number of special ticket holders which warmed up and an audience already relishing the start of the show.

Opening tonight The Haunt (previously AnastasiaMax), a fresh sibling fronted group from Florida. Clearly a group of talented musicians, The Haunt, deliver intriguing amalgamation of alternative indie blues toned rock. At times some tracks are a little overly affected and the set’s direction pitches a bit, however, this is not what The Haunt deliver overall. When their tracks have a clear focus, they are genuinely striking and gratifying. Plus, the performance is compellingly ardent and rewarding. It is certainly, worth following The Haunt as they continue to create and making efforts to catch them live when you can. 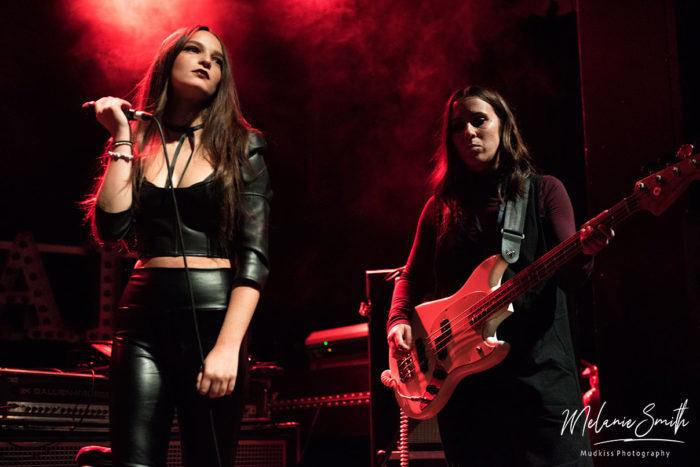 Palaye Royal knock the audience into an instant frenzy with a scintillating start, Don’t Feel Quite Right almost gets drowned out by the combination of screams and hundreds of voices repeating the lyrics back at the band. With an abundance of spirited energy, that does not waiver throughout, Palaye Royale storm into My Youth Generation. The crowd is in fine voice throughout You’ll Be Fine while the band 100% channel the essence of punk rock and their enthusiasm is infectious. “I’m meant to be some kind of emo icon” shares a grinning Remington Leith to an audience feeling the intensity of the band’s exhilaration equally. 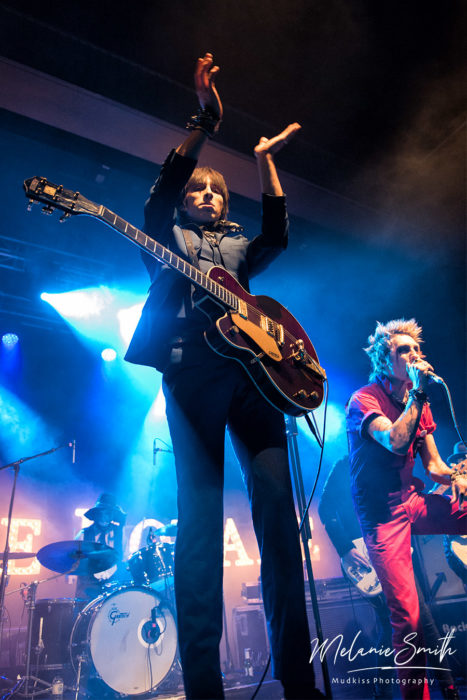 Many a fan’s favourite Masochist will forever more be a popular addition to a set, the crowd were delighted to sing along. Sebastian Danzig’s heavy guitar work delivers one exciting hook after another and Emerson Barrett provides a mesmeric onslaught with plenty of nimble high-hat action. The immense energy of the set is a thrill to experience. However, the push and crush can take its toll and some people did, worryingly as it always is, pass out and needed to be lifted out of the front area. Emerson himself leaving the stage to help someone whose need for assistance was unheard over the overwhelming crowd noise. Another insight into the authentic vigilance this band has over their fans.

This is a band that is way more than just an aesthetic. Lyrically Palaye Royale avoid the usual rock n roll tropes taking on more complex and darker themes including depression, anxiety and drug abuse. Dying In A Hot Tub, is, in particular, a candid take on some of those subjects, delivered tonight with emotion and gravity; a true highlight of the night. Closely followed by their cover of My Chemical Romance’s Teenagers if for nothing else than just the sheer nostalgic fun of the track and Palaye Royale’s delivery. 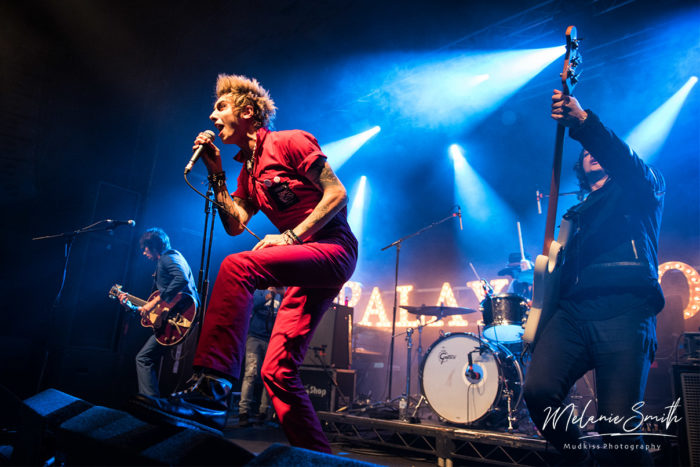 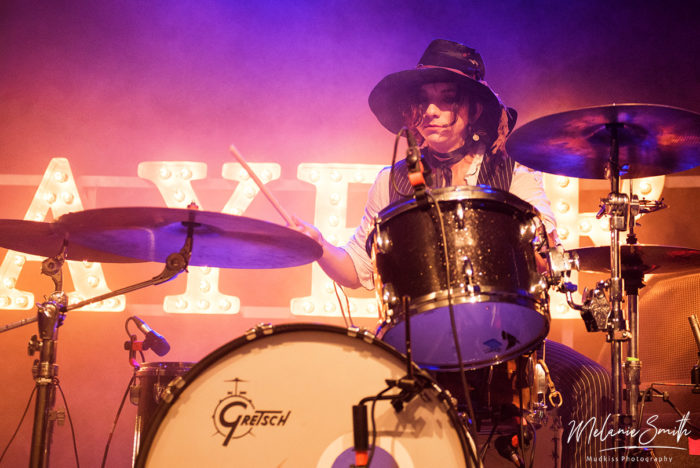 There is no denying that Palaye Royale has proven divisive for some. It is hopeful that in time their musical style, substance and value will become more appreciated. Because along with delivering a classy blend of blues, rock and punk they present a fearlessness that makes every performance a heart stopper, tonight Remington again finding a way to climb the venue this time a speaker stack that must have been well over 12ft high, that always leaves you wanting more.

Live Review by Katie Clare. More news reviews and interviews by Katie on Louder Than War can be found at her author’s archive. Katie can also be found on Twitter where she tweets as @tokyo_katie.