Home Music Reviews Album Reviews Palace Of The King: Get Right With Your Maker – album review 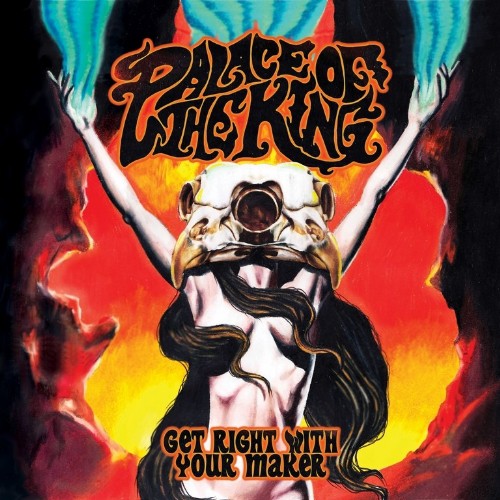 PALACE OF THE KING

GET RIGHT WITH YOUR MAKER

Looking for a spot of no nonsense hard rock and roll with a slice of funk? In the finest of Aussie traditions comes the groovily titled Get Right With Your Maker that finds Palace Of The King back on their feet again and whipping up a killer storm.

Noting that the ‘Melbourne based nomads’ Palace Of The King are fully paid up badgeholders of the club of which AC/DC hold the honorary chair and Airbourne are current holders of the presidential seat, there’s a massive shot of anticipation. You’d get short odds on them being not a million miles from the AC/DC template but you can add a dash of all American hard rock injected into their blues and psych infused hard rock. Drawing on the likes of G’N’R, Rival Sons and Poison, they owe a debt or two to some of the legendary greats who’ve earned the right to be known by a single name: Purple, Zeppelin and Sabbath.

Brash, bold and brazen from the off as seven dramatic minutes of I Am The Storm unfold, the declaration that comes with Back On My Feet Again that “ain’t nobody gonna hold me down” strikes a huge power chord. Alongside the huge stomping Fly Like An Evil, there’s a touch of scuzzy funk on Sold Me Down The River, offering a broader palette than a tried and trusted four bar chug. Sleaze and slide are to the fore on Said The Spider To The Bird with stabs of organ and keys that add the occasional dash of colour and flavour throughout the album.

The last song recorded for the album, It’s Been A Long Time Coming, however, is the perfect crossover single as Tim Henwood’s razor rasp combines with a delicious hook to reel you into a set of songs whose energy and drive see POTK ride roughshod over their rivals in a densely populated field. It also defines perhaps the best way to proceed: record the album then once you’re warmed up, then get cracking on the single. Hang on for a minute or two after the last track too for a surprise; a round the campfire, acoustic blues of a bonus that shows a lighter side of POTK as well as adding a reference to the album title. The palace of riffs suddenly transforms, ever so briefly (almost an afterthought) to a cathedral of calm.

An album that doesn’t reinvent the wheel, but maybe adds a couple of new remoulded tyres and does a smoking job with a well established format.

You can see the video for It’s Been A Long Time Coming from the album here:

Palace Of The King are online here