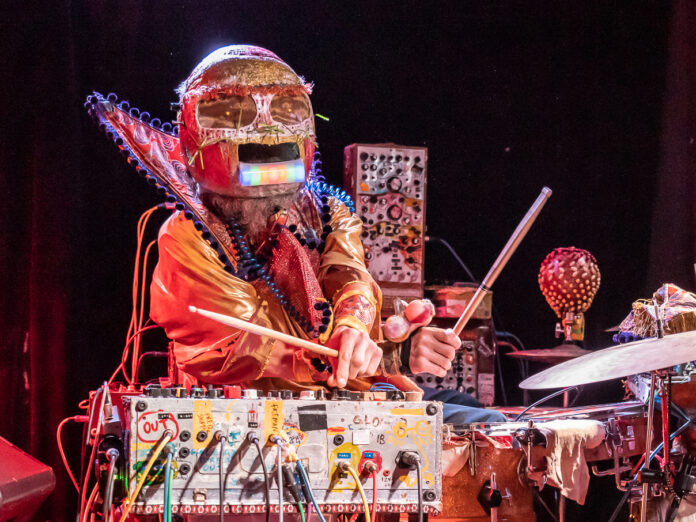 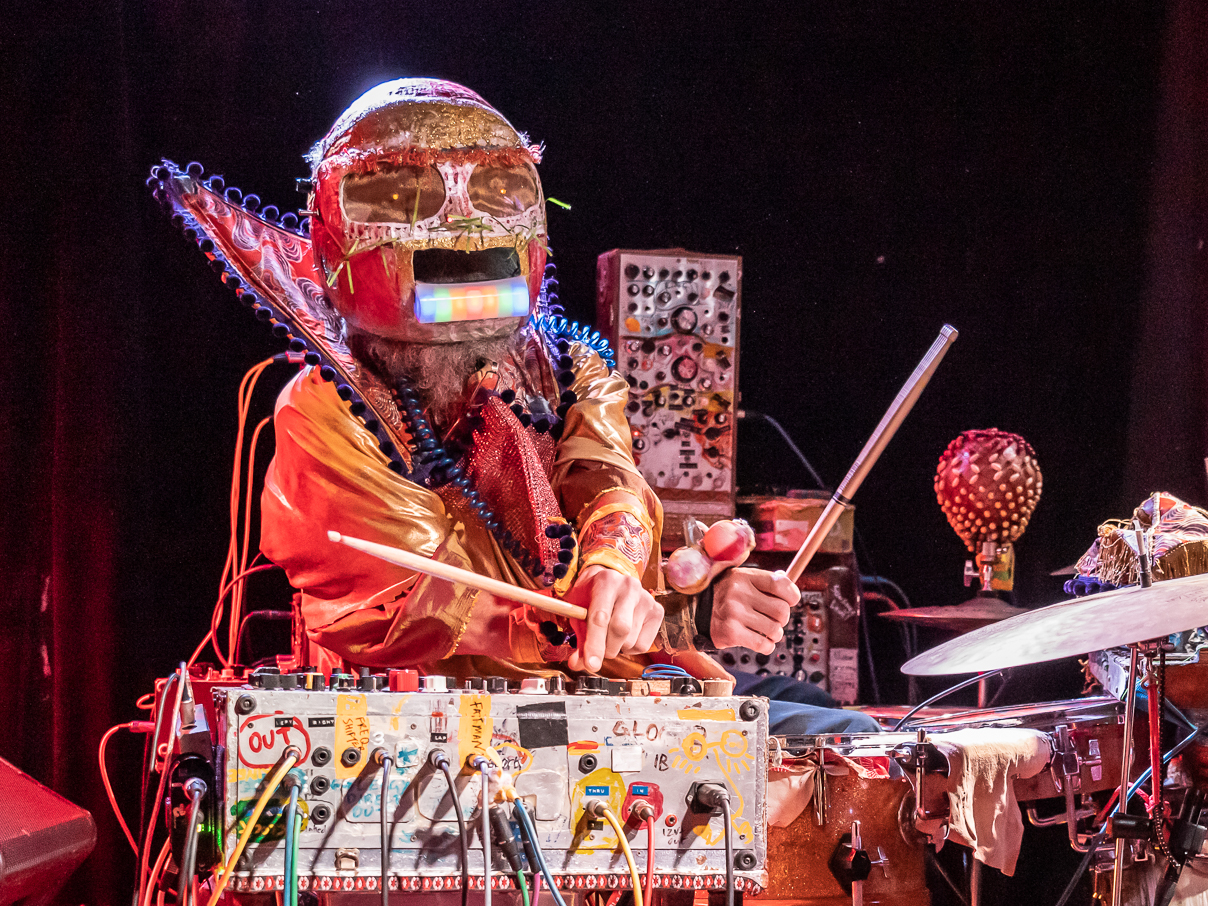 This weekend is that swamped with gigs around Manchester it leads us to thinking, Panic Gigging? Put away those jerry cans and run in a frenzy to your local venue before the next (we hope not) lockdown… You’ve got Yungblud, Echobelly, Rick Astley and Blossoms, Black Honey plus Fontaines DC to choose from and of course the weird and wonderful Paddy Steer. Wayne AF Carey decides to visit another planet for the night…

I’ve witnessed some mad shit in my lifetime but tonight I’m freaked out just a little bit by what actually unfolds during this night of robots, tech madness, aliens and wizards. No, I’m not on acid but I may as well be. Let me explain… 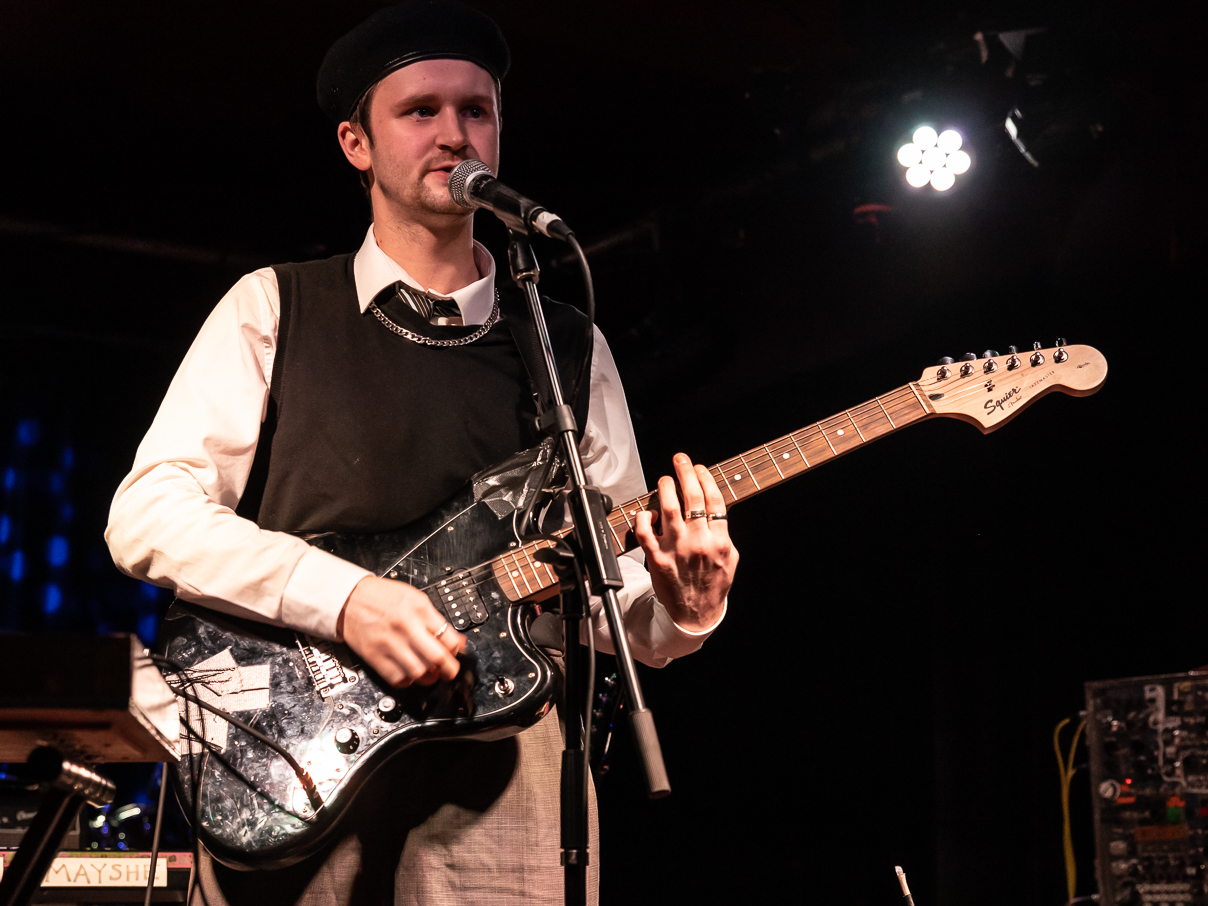 Deco Records duo Esther and Matt are becoming familiar faces on the underground scene due to their experimental roster of new and old bands hitting Manchester. They’re not afraid to take a gamble with new acts such as the young Crimewave. A Newcastle solo artist armed with his electric guitar and keyboard, wearing a beret and his dad’s slacks like a young Frank Spencer without the catastrophy. He does a short set of experimental noise which flirts between noisy MBV sonic guitar crashes and eighties new wave synths that wash over the venue with a hint of DIY craziness. He can’t keep still and swaps his guitar from left to right, fiddling with the keyboards in his own bedroom style warped ways. Apart from a few early sound glitches it’s an interesting set of lo-fi twiddling that somehow works. 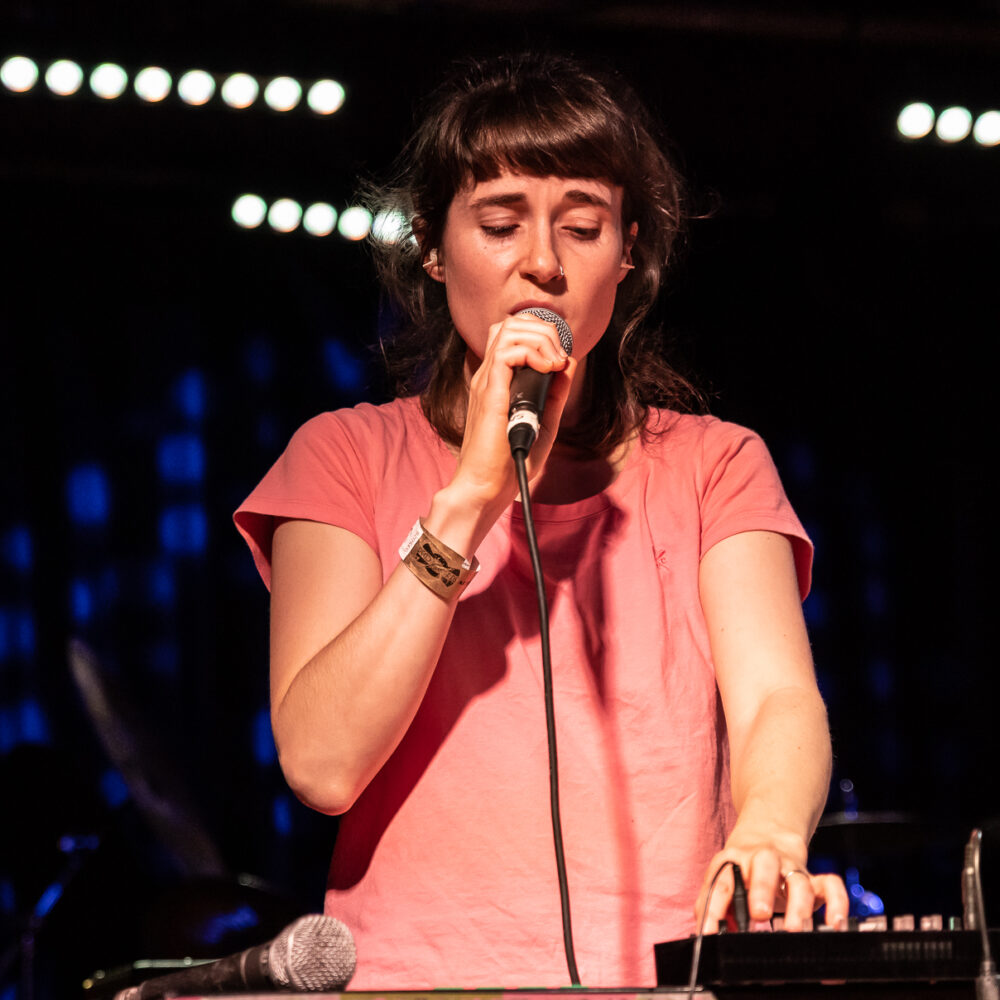 Coming out of Yorkshire next is Alice Rowan aka Mayshe-Mayshe, a self proclaimed bedroom pop producer who delivers an astonishing set of weird and wonderful sound. Her vocals are rich and ethereal and she has a brilliant knack of looping sounds around the synth effects. Can I actually see a hairdryer under the keyboard? She uses it anyway and not to do her hair! It’s an eye opening set of soaring vocals and sound effects that soothe and vibrate across the floor like a solo Cocteau Twins floating in the ether. A unique and inventive talent that will surely be around for years to come with that voice of beauty. 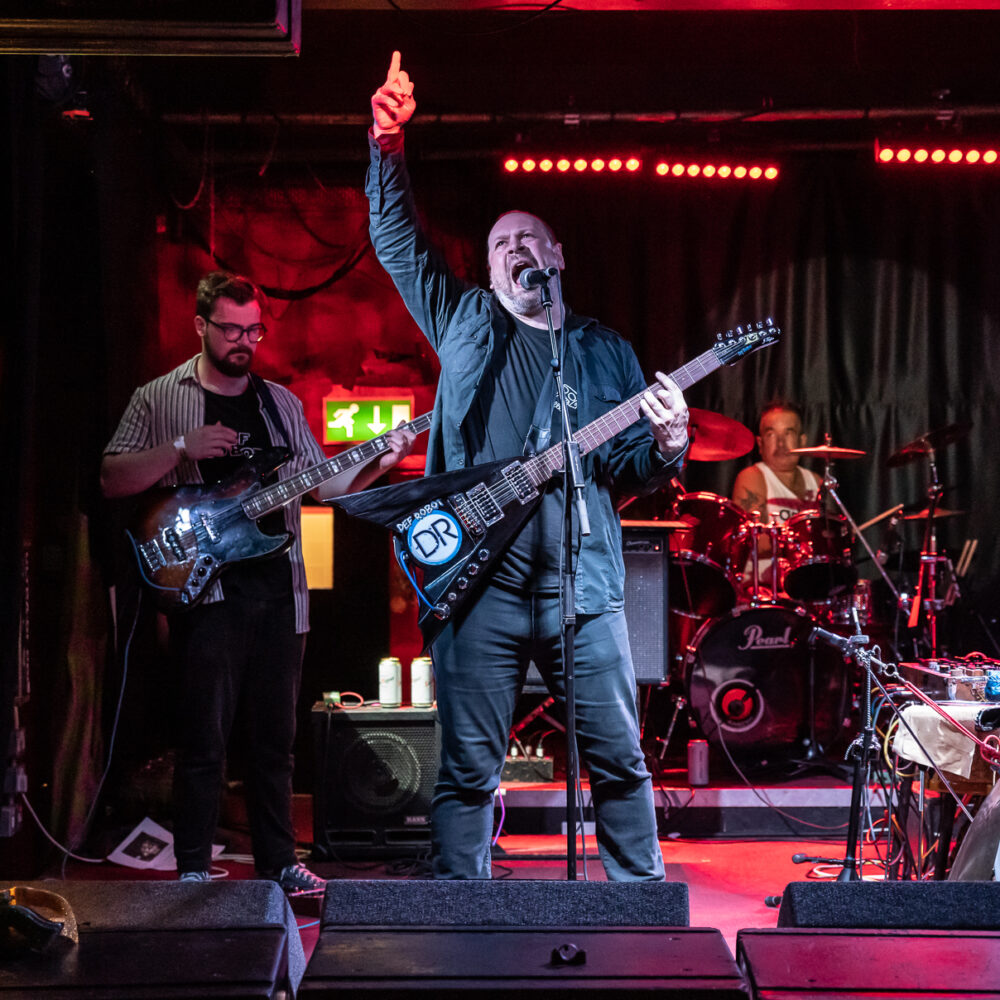 Louder Than War favourites Def Robot bring back a slight bit of normality to the night. It’s a family affair with Paul Taylor’s daughters running the merch stall at the front of the venue, continuing their Dad’s legacy from the heady days of Kerosene back in the nineties. After sixteen albums in and a seventeenth on the way, there’s no shortage of songs in this cannon. I’ve been told their other guitarist can’t be here tonight but the show goes on. It’s a belting set of alternative rock, film noir, grunge, Americana you name it. They air the excellent I Am The Weapon (their Bond theme), a rousing TV Lies, a cool as fuck Reflection and end the set with the amazing Raindrops which is a torch song that goes down excellent with this buzzing audience. A great set that delivers and shows that Taylor has still got the moves as a prolific songwriting frontman. 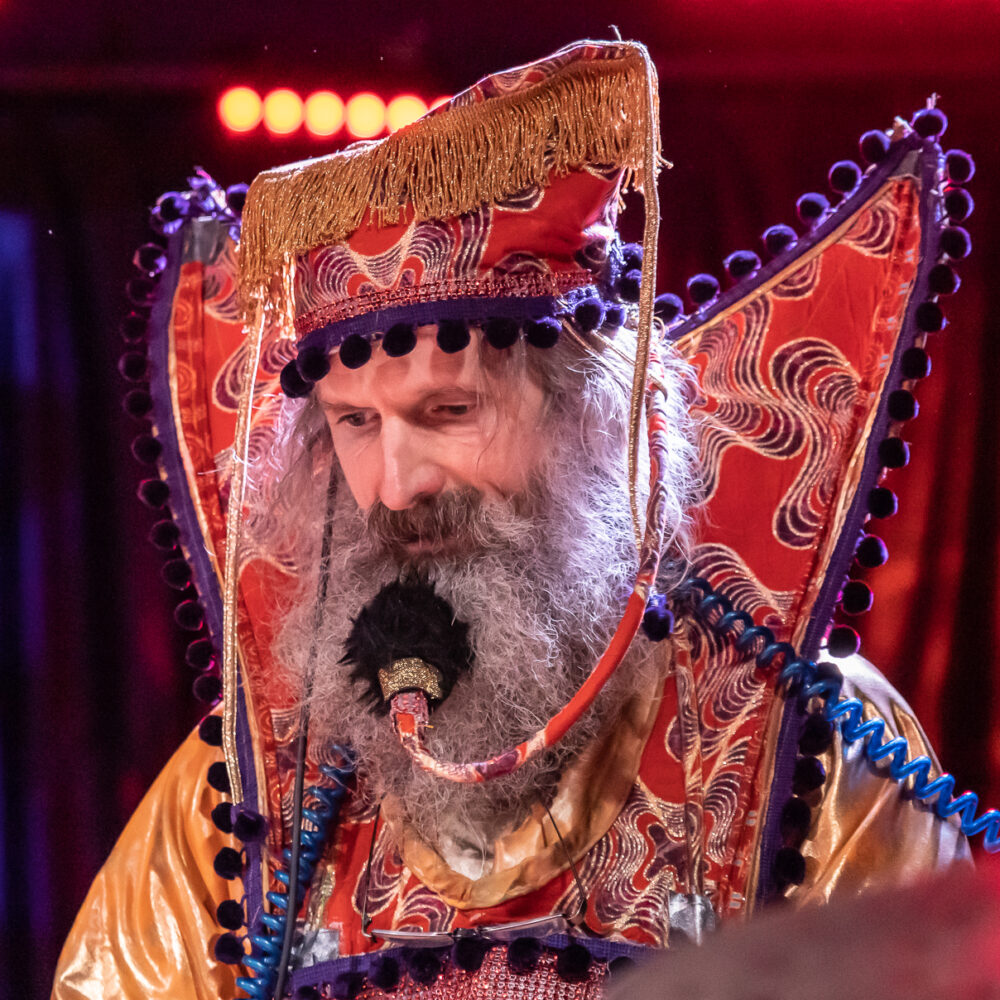 Let the weirdness begin. Paddy Steer might as well be from another planet. The stage set up is bizarre and trying to describe the sound is a task in itself. I hear earlier on tonight that he was in Toolshed with 808 State’s Graham Massey who I caught live many years back at Platt Fields. They are an acquired taste… Graham Massey describes his sound: “sounds like a Swiss cuckoo clock made of egg boxes and horsehair, glued together by an African Moog player in a Vietnamese iron monger’s shop”. Now that’s what I’m talking about. His array of instruments are insane. He’s got vocoders, 808 hi hats and kick, percussion synth, delays, fuzz clones, envelope followers, you name it. One minute he looks like an exotic Gandalf, the next an alien when he slips on a weird helmet which lights up. He sounds like a wizened Aphex Twin with drums. He tweaks those motherboards in his own little world of crazy noise that makes you grin throughout the whole set. There’s nothing quite this I have ever heard or witnessed (besides maybe Henge) and you get this feeling that the equipment could all fall apart at any minute, yet you know he knows what he’s doing in a perverse controlled way, from a maverick who’s created his own world of colour and wonder. Fuck knows what any of the songs are called but who cares? It sounds amazing and it’s a whole experience you have to witness for yourself. Long may Paddy Steer reign!

Photos courtesy of Neil Winward Photography. Please note: Use of these images in any form without permission is illegal.