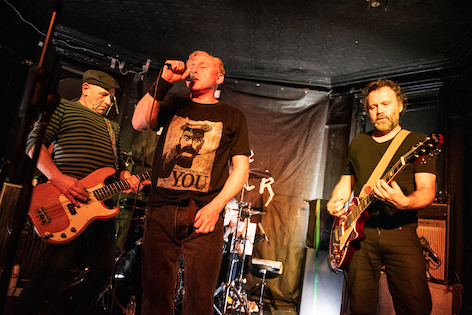 The Pack photo by Gary Hough

How many great bands can you actually be in all at the same time?

If you’re Kirk Brandon, it seems like three plus a solo career.

Theatre Of Hate and Spear Of Destiny seem to chase each other around the country, both at the top of their respective games, and Brandon’s solo shows accompanied by a cello are the stuff of legend. Not content with this, he has somehow found the time to get his first band back on stage after a break of forty years.

Because tonight it’s the turn of The Pack, who are back from the punk rock wars of 1977/79.  What was once a faded memory and a treasured footnote and a foundation for later adventures with only a couple of releases and faded youtube clips to remember them by is back on stage after 40 years.

Formed in late 1977 by Kirk Brandon on vocals, after his first effort Pack Of Lies, with three renegades fresh from Vancouver’s early punk scene legends, The Furies, who were in London looking for a gig. The band was Kirk with the Canadians, the late Simon Werner on guitar,  his brother Jonathan on bass, and  Jim Walker on drums  who eventually replaced original drummer Rab Fae Beith (read this in-depth interview with Jim Walker here) . The band made a brief impact on the hyperactive times with two 1979 singles, ‘Heathen’ and ‘King of Kings’, and an EP in 1980 – ‘Kirk Brandon and the Pack Of Lies EP’ before the singer moved on to the much loved Theatre Of Hate.

Punk rock may have been a flash and a brief moment but its sustained itself remarkably well. The Pack are a brilliant example of the power and inventiveness of the music that makes it sound as urgent now as it did way back then. Of course it helps to have a music that was as forward-looking and seductive as this. They may have formed in the maelstrom of 1977 but the Pack were already in a rush to move forward and their short set of nine songs tonight encompasses their whole brief career is full of fascinating ideas, rhythms and off-kilter and brilliant melodies that pack a maturity that was already way beyond they youthful years.

It’s fascinating to watch this band resurrected in full, fierce, post-punk finary after decades and the sold-out venue is full of the perfect tension of excitement as the audience wait for the band to return to the stage. Kirk Brandon is one of those artists who attracts a devoted and loyal following but tonight there is an extra high tension of positive excitement in the room as those battered long lost memories and vinyls are to be brought back to life by Kirk on lead vocals and without his distinctive Gretsch, Jonathan Werner back on bass and Warren ‘Woz’ Wilson, ex-Spear of Destiny on guitar and on drums, Steve Grantley from Stiff Little Fingers.  Jim Walker “wasn’t really interested” in rejoining, though he is still in the UK, and involved in making low-budget horror films).

The band don’t disappoint and this is a perfect recreation of past glories and a reaffirmation that The Pack deserve to be remembered as far more than a punk rock footnote. They are razor tight, powerful, focussed and drilled as they play the songs with that remarkable intensity that adds to the powerful impact of the greatest songs.

There is something thrilling about the early flurries of post-punk when the creative faultline of the just out of punk musicians were creating new music that was full of claustrophobia, dislocated instruments and imagination outstripping teenage ability. The decades have only added to the band’s armoury. The 2019 Pack keep the high level of intensity necessary for the music and that kind of total control of sound that is vital. There is plenty of bass driven action from John Werner who was a key creative force in the original line up with his melodic bass runs bouncing off the tightly clipped guitars they add a tension to the excellent set of songs that sound like they could have been written last week with their timeless invention.

Kirk, of course, is in fine voice, that distinctive operatic delivery that has defined all of his bands.  It’s fascinating to hear his distinctive musical brand in its proto stage and those huge epic choruses, diverse rhythms and dark atmospheres are already in place. Just to underline this they reclaim the classic ‘Legion’ which they wrote before Kirk took the song to Theatre Of Hate for a reconstruction and an added sax. The original version is instantly recognisable but with its own twists and turns and you can almost hear the sax in the midsection before it was brought in by Theatre. ‘King Of Kings’ was their should have been a hit anthem and is delevree perfeclty.

The Pack version of Legion is also a chance for the audience of punk rock connoisseurs steeped deeply in the form to up the moshpit ante with a song that is both so familiar and in its original incarnation and yet so different but already heading towards its epic status.

The Pack, like so much music at the time, undeservedly disappeared through the cracks – I guess there was an overload of bands to embrace in post-punk but it seems tragic that they never got the breaks – Of course Kirk made up for it with Theatre Of Hate and Spear Of Destiny who broached the mainstream which makes this a brilliant archaeological dig into post punk’s inspirational archives and a chance to embrace Werner’s contribution.

There can be no encore. There are not enough songs. It’s perfect like this. No attempt to add a new song. Just a reminder of something that was so short lived and yet so perfect from a time when it mattered and a reminder of just intense and inventive those times really were.

The whole audience is dazed by this blowtorch short sharp shock of brilliance and the talk is of hoping for more.

Over to you…The Pack