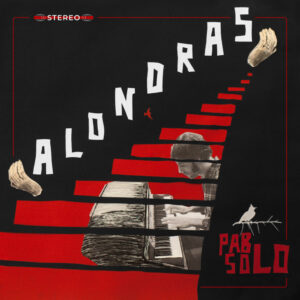 Pablo Solo releases his debut album and captures the sonics and styles of the sixties in a glorious collection of psych-pop.

It’s wonderful to hear a new record that is so steeped in the many sounds of the sixties that it feels almost like a lost classic from the very first listen, whilst at the same time feels incredibly natural and unstudied. That’s exactly what Pablo Solo, ex-frontman of Spanish band The Puzzles, has achieved on his debut solo album, Alondras.

The blend of styles and ability to jump between them with aplomb comes out right from the beginning on Gotta Leave, with its mix of psych and soul and a light fuzz guitar underpinning the grooving rhythm. Solo’s falsetto vocals glide over the top, with harmonies shimmering beneath throughout. With him alone taking on all the vocal and instrumental duties it may have been easy to fall into the trap of over-layering the songs with too many ideas, but it is that restraint that he shows, playing each instrument with simplicity and providing only what is necessary, that adds to the beauty of every track. It is also his ability to flit between vocal styles. It’s high praise to say that by track two, Wasting My Time, he’s sounding like a possible cut from The Beatles’ White Album. The more guttural vocals calling to mind Yer Blues as the piano pounds along to hold the song together. Guitar lines flit in and there’s a Hammond that sits back in the mix. It’s a style that he carries on with the following Jerome, which, once again, when the song really kicks in, brings back that soulful groove. Three songs down and he has you hooked.

Elsewhere, such as on The Ocean King and A Dream, he calls to mind The Beach Boys, especially in the sweet harmonies that run through most of the record. On Gus, The Dog he really bathes in psychedelia as different rhythms mash up against one another, jumping from one playful jaunt to another before signing off with a lazy simple acoustic plucking, like John Martyn drifting asleep on a summer evening. The doublet of Macy (Part 1) and (Part 2), falling respectively mid-album and as the final song, filter through an AM radio sound. Their distance is what calls you closer and makes them more affecting. It’s also clear by halfway through the album that, despite coming from the northern-Spanish community of Cantabria, Pablo Solo is not only harnessing the sound of the sixties in the UK and US, but also the lyrics. Every song is sung in English and the imagery he calls to mind feels firmly connected to those times and places.

As the record progresses it’s hard to think that he will better himself, but the highlight doesn’t come until the eleventh track with Thank You. It is here where he pulls everything that he has poured into the record together. The rhythm stumbles over itself and his voice is sweet and yearning in equal proportions. It’s the cherry on the top of a fantastic debut album and one that will hopefully garner him praises from much further afield.

Alondras is the distillation of the influences that have no doubt continuously crept into Pablo Solo’s subconscious over the years. Talking about the album, he has said that, after dissolving The Puzzles, he had no intention to release more music but simply sat at home and recorded whatever came to him. It is that effortlessness and naturality that he has bottled to near perfection.

Watch the video for Thank You below: