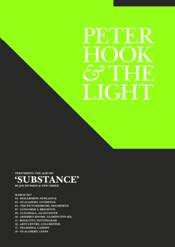 Spider Touring Present An Evening With Peter Hook & The Light

Tickets for all dates go on sale Friday 23rd September 2016.

Following the debut Glasgow, Manchester and London dates in September 2016, Peter Hook & The Light are to perform Joy Division and New Order’s legendary Factory Records compilation albums “Substance” live with dates across England and Wales in early to mid March 2017.

Spread across three weeks, the dates see The Light return to a number of venues they have played acclaimed and well attended concerts previously as well some new arenas for the band. Beginning Thurs 2nd March at Boilershop in Newcastle, that week’s run of gigs see Hooky and The Light back at the Liverpool 02 Academy and The Picturedome, Holmfirth.

The tours second week begins on the South Coast, Tues 7th March at Concorde 2, Brighton with dates end of the week in Gloucester, Leamington Spa and a first gig for the band at the legendary Rock City in Nottingham.

The final leg of the tour, across Thurs 16th Mar to Sat 18th Mar sees the band finish up the run at the Arts Centre, Colchester, Tramshed in Cardiff with the final night at Leeds 02 Academy.