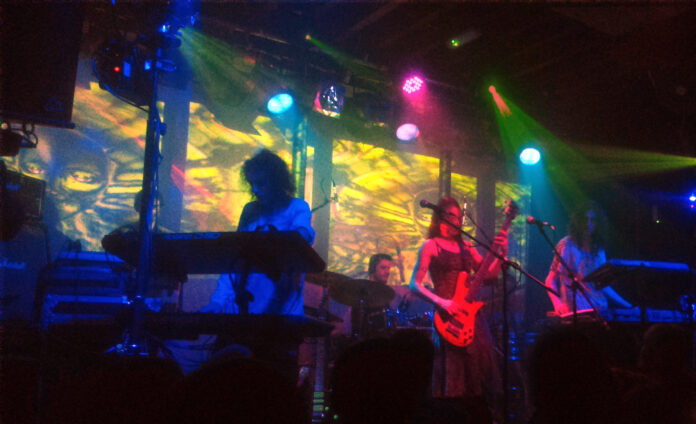 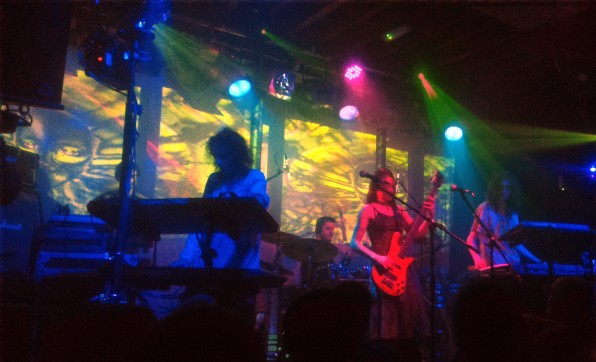 The Ozric Tentacles play an absorbing two hour set featuring dub bass, tantric rhythms, plus trippy visuals as standard. It could be The Ozrics: The Movie! Louder Than War’s Nick Fisk reviews.

It’s over 20 years since I last saw the Ozric Tentacles. Same town, different venue. Unsurprisingly, despite the band now featuring just 1 of its original members, they have changed hardly at all. I think this is a band that perfected its craft quite some time ago, and whereas with many bands you might hope that they change things a bit, here is one band that you can be quite content for them to just keep on doing what they do.

The band make a celebration out of the act of merely coming on to the stage, which is nice to see. Their faces are lit up with smiles as the logo appears on the backdrop, and the music kicks in.

I suppose it helps that the Ozrics’ sound itself is already pretty diverse. Even though I’m not a producer myself, I love those sample CDs with thousands of bleeps and bloops to listen to. It seems to me at times that the Ozrics have dispensed with those and come up with a whole series of sounds that they’ve just made their own.

Is it dance music? Certainly, you can dance to it, but I think the band just leave it up to the listener to decide really. It’s as if they’re bestowing upon the crowd a freedom to do as they wish. Absorb it, revel in it, soak it in. It’s a captivating blend of dub bass and tantric beats that ebbs and flows and seems to just keep going on and on. Ed Wynne, the Ozrics’ mainstay begins one song on guitar that briefly sounds like it might go into a blues number, but before long, it’s back to the more familiar sound, if familiar is the right word.

The Ozrics’ sound seems to capture the idea of just being, rather than being something…why do I find myself sounding like a hippy philosopher?!

It certainly must take commitment to be either a member of the Ozrics, or to be part of its community. Not that it’s an exclusive community, far from it, but just as with the Rasta movement, there is the obvious connection with one particular drug, in this case, the one found growing in mountainous fields at around this time of year. A lot of the associated imagery is based around hallucinogens, and many members of the audience do indeed look a bit spaced out, as you might imagine.

In terms of visuals, we are served up a feast, and again, this is something the band has long been associated with. Two screens, one for each eyeball, depict twisting psychedelic scenes and shapes. Throw in a top quality light show, and you’re presented with a display the likes of which you wouldn’t normally see out of a top priced stadium concert, but thankfully, you don’t have to be listening to U2 at the same time.

At 2 hours, it’s a long set, and it feels at times like you’re watching Ozric Tentacles: The Movie. But there’s no time for boredom to set in. There’s always enough, or more than enough, going on to keep your eyes, ears and mind occupied; there’s almost a danger of becoming completely entranced! It doesn’t even matter that the entire set is instrumental – with no words to have to worry about remembering, this gives you the opportunity to just relax and enjoy for a change. No doubt there are fans who know which are the older tunes and which are the newer, but it blends fairly seamlessly – you could get into this movie at any stage, without needing to know what’s been before.

The only words heard from the stage are between songs when bassist Brandi Wynne talks to the audience. She’s been with the band 10 years (let’s face it, that’s longer than the time many bands stick around in total), and has the confident air of someone who’s now totally integrated with the Ozrics family.

I’ve just recently got the old record player out again, and would have quite liked to buy one of the band’s records on vinyl which were on sale, but by this time, I’d spent most of the cash I had on me on beer, and sadly, the cashpoint, placed conveniently right next to the merch desk, was out of order! The band, signing posters, seemed to have a pretty laissez faire attitude as to whether or not I completed the purchase, as you might expect from this most uncommercial of acts, so instead there was nothing left to do but stumble on into the night, not sure exactly what it was that had just occurred, pretty sure I’d enjoyed myself, and certain that it was definitely an experience!

The Ozrics are not necessarily the sort of band that crop up in that many people’s list of favourite bands, but, godammit, they’re practically an institution! Definitely still one of the finest live bands around.

All words by Nick Fisk. More from Nick can be found at his Author Archive.