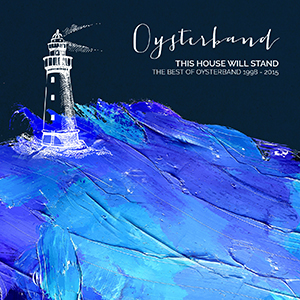 OYSTERBAND: This House Will Stand

With a folk rock pedigree over almost forty years it’s got to be a task and a half to try to summarise that career into a double CD even if it does only focus on the last seventeen years. So, with a look at their last six studio albums how have Oysterband gone about mission impossible?

For a start you get the band to  make the selection so you have that element of quality control. So fill your first CD with fifteen songs and then provide something a bit different from the usual regurgitation of expected tracks on the second disc. Admirable.

The first disc –  subtitled ‘this house will stand’ covers the almost expected and a selection hard not to argue with although some may piffle. The collaboration with June Tabor on the award winning ‘Ragged Kingdom’ realises ‘Love Will Tear Us Apart’ inevitably while the other fourteen include a couple of interesting takes on the trad. in ‘Bright Morning Star’ and ‘Blackaterside’.

The second disc, ‘the work of my own two hands’, is where things get more interesting. Kicking off with the first of a couple of recent recordings,  ‘I Built This House’, which lends it’s lyric to the two subtitles, also provides the defiant title to the set. Bold and forthright it’s the musical embodiment of what Oystrband stand for. It also provides a confident and self-assured  title for a retrospective which sees the core of John Jones, Ian Telfer,  Alan Prosser  (the three recently toured as Oyster 3) and Al Scott have been accompanied by all manner of guests on their recordings – noted in detail on the CD booklet. Along with ‘Mississippi Summer’ and ‘Bold Riley’ they stand as examples of Oysterband present, but are paired up with a selection of live tracks, alternate versions and demos which add a touch of ‘must have’ appeal  to the set. It also allows the band to trawl the archives for a few tasty gems and rarities – check out ‘I Once Loved A Lass’ from an old fRoots magazine compilation as a particularly choice selection.

For many years they’ve remained a constant in the folk field, blending occasionally into he rock stream, probably nodding wisely at changes in the musical climate, yet have  forged ahead in their beliefs and their musical vision.

Watch ‘Diamonds On The Water’ here: