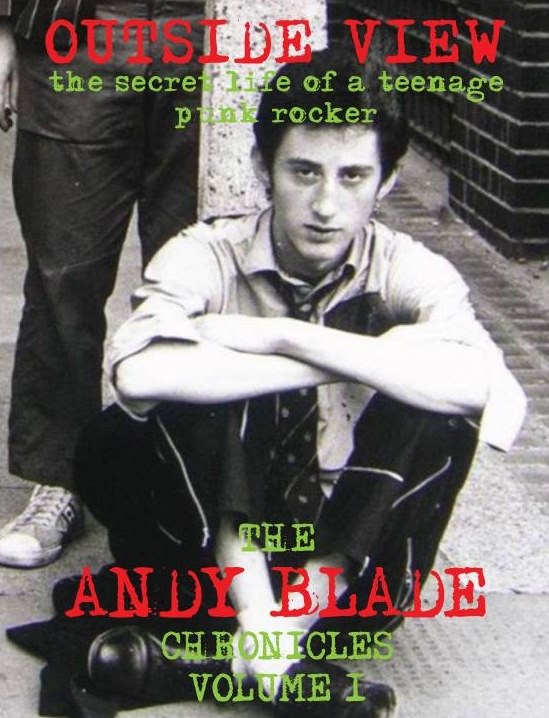 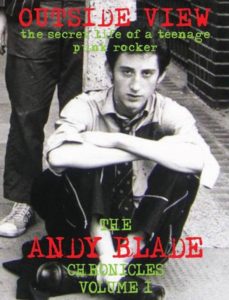 Outside View: The Secret Life of a Teenage Punk Rocker:  The Andy Blade Chronicles  – Andy Blade

There was a similarly titled autobiography published by Cherry Red in 2006, now out-of-print, but this is a new, updated, longer version of the story. More photos, 10 by 7 inch hardback and funnier and more outrageous than ever.  Rotten, Strummer, Scabies, Shelley, Weller, Idol, Sid… everyone makes an appearance… and Blade pulls no punches.

Despite what every other punk rock writer and critic will tell you, this is the best book about punk rock in England 1976-78. No question.

It has to be. The fucker was there, right in the middle of it – before ‘it’ had a name -and he was a weirdo school-kid fantasist, obsessed with sex and drugs and rock’n’roll…. the same as the rest of us (at the time or years later at the same age) who bought the records or experienced later generational/regional variants thereof.

His band. Eater, recorded the third proper UK punk-rock single after New Rose and Spiral Scratch, Outside View, which gives this hardback book its title.

Because they were young and naive, but newsworthy (a 14 year-old cutie called Dee Generate as a drummer who became an teenage-girl-mag pin-up) bands like the Damned and Stranglers and even Strummer were supportive as Eater were not considered to be a threat to them as musicians.

When I reviewed the no longer available Cherry Red edition back in 2006, I wrote this, all of which still applies, but this edition has loads more photos and more juicy details….

...this is arguably the very best inside account of Punk Rock in London 1976, ’77, and far from being just the story of school-kid punk band Eater. ‘The Sid and John Stories are worth the price of admission alone’, says Henry Rollins, and if you want to know which member of the Clash had the biggest dick, then you’ll find out from these hilariously, frank chronicles. Of all the books on punk, this is destined to be the peoples favourite, as it is the most intimate, personal, cutting and basically the most honest. It’s how one person saw it, felt it, and lived it. The fact he was a naive 15 year old at the time helps immensely as the whirlwind journey of discovery is recalled with amazing clarity. He can spin a yarn too and he doesn’t hold back on all the gory details. Being on the receiving end of a washing up liquid bottle full of piss being used a water pistol, by a Sex Pistol after being caught in bed with said Pistols girlfriend is a particular highlight.

There’s a lot more to this book though. It is about being an outsider as a child in the 70’s, Blades parents divorce resulted in school-phobia and he withdrew into the fantasy world of pop music.  His ‘secret life’ was as much about being a fan initially as it was being a performer, see the segment on how he stalked the Runaways, issuing fake bomb threats to the hotel they were staying in, hoping they would emerge, semi-clad or otherwise. You really get inside Blades head reading this intense, dramatic yet funny book and get to understand how shy school kid Ashruf Radwan transmogrified into teenage ‘low-rent rock star’ Andy Blade, and, having burnt out before his 18th birthday descended into his ‘drug hell’ and made it through the other side.

Instead of chronological history, boring statistics, exact dates and details of recording sessions, socio-political theory or analysis you get stories of encounters with a bizarre cast of supporting characters..

Blades writing is sharp and funny.  It’s conversational and loaded with black humour and bitter insight.   There are too many highlights to pick just one and the Seventies are evoked in stark monochrome but with brilliant flashes of colour when the punk genie emerges from the bottle.

This has been talk for a while of a movie/Netflix adaptation for the big or small screen and done properly it would be absolutely brilliant – like Life on Mars -without the cops and How to Talk To Girls At Parties -without the aliens, and miles better!

In the meantime, even if you have the earlier edition – this is the extended-re-mix which every lover-of-the-story-of-punk should not be without.

Buy from Here or on Amazon or E-Bay