Home Music Reviews Album Reviews “Outside Of Everything.” In Conversation With Rita Lynch On The Eve Of... 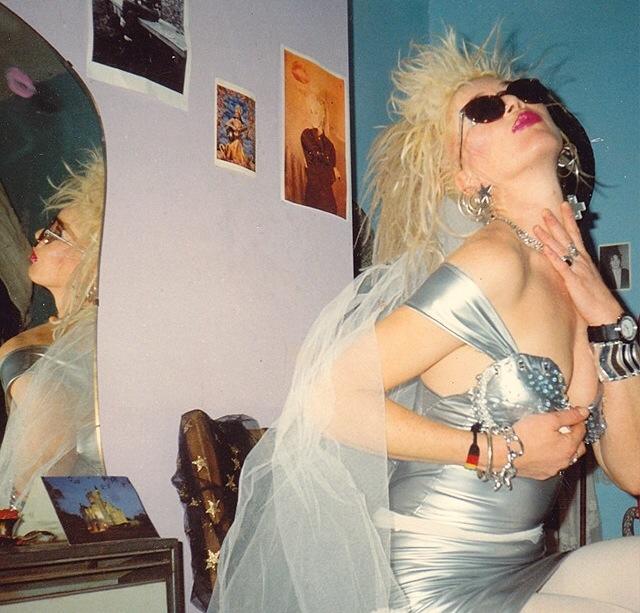 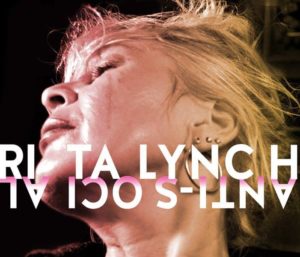 Rock goddess and Bristolian legend Rita Lynch has a new album out today with the album launch show being this evening (the 19th) at Bristol’s Exchange. We sent Ben Tansey along to have a chat with the ex-Blue Aeroplane and he reports back below, giving us the low down on the album in the process.

Rita welcomes me into her home, a small two-up two-down tucked away at the end of a cul-de-sac in the St. Paul’s area of Bristol, a location she’s called home for the last 30 years. She was drawn to the area for its staunch independence, its powerful and often defiant cultural pride and most of all its sense of freedom. In the summers she earned a fierce reputation as the only 6 ft 2 white woman to walk the neighbourhood barefoot in a mutilated wedding dress. Children passing on the bus would tap their mothers on the shoulder and point at the mad fairy lady with equal parts confusion and wonder. Rita saw many parallels between the Jamaican community of St Paul’s and that of her Irish upbringing, only this time, instead of the suffocation that drove her out onto the open road, she found comfort and liberation.

As I enter the kitchen I am met by Rita’s biggest influence, her 12 year old son Jimmy. It is only as we talk that I come to realise just how important Jimmy is, not only to Rita’s life of course, but to her creative process. Jimmy has autism and like the majority of autistic children he requires round-the-clock care. As Rita and I chat in the kitchen, Jimmy plays his favourite game outside; stirring paints into wondrous concoctions. The back door is open and we are able to watch him through the large window. It appears to me during my brief visit that Jimmy is only partially verbal; he calls for his mummy and is able to ask for certain things with single word questions, but that’s where his communicative skills end. This inability to make oneself understood is what can drive autistic children to challenging behaviour, but Jimmy is as good as gold. When he smiles he does so with his entire body and his laugh – high pitched and playful – soundtracks our entire conversation.

Now, we’re three-hundred words in and this doesn’t feel like the beginning to a piece about the wild rock ‘n’ roll banshee we hear on ‘Anti-Social’. Where are the tales of debauchery, where’s the sleaze? 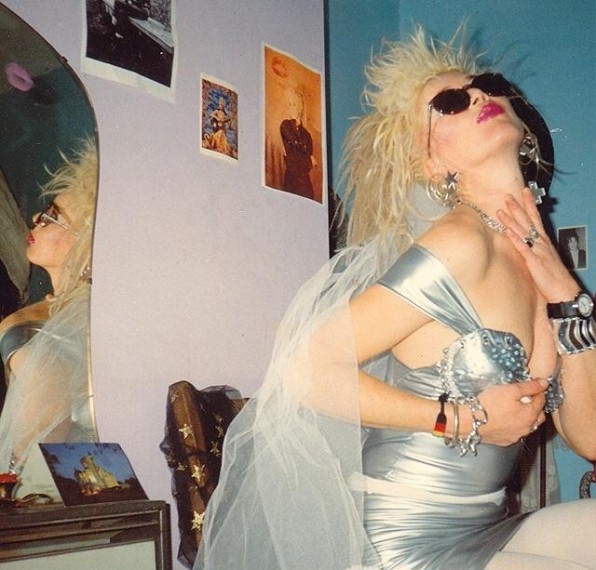 Rita assures me there are stories, how could there not be; at the instruction of her hero Bob Dylan she left home aged 18 and travelled the world, guided by the single ethos that so long as she could get up and walk away, whatever happened could be forgiven – a hard rule for a hard young woman. But Rita Lynch does not live by her anecdotes. She tells me of her disdain at hearing what she calls the “cool” people in competition with each other to tell the most outrageous story. The constant talking and never listening. She feels more at home with the freaks and drop-outs, she tells me: “I feel like I’m outside of everything”.  All that inebriated rebellion is just too cliché, too conformist. Besides, she’s a mother now and a woman one might dare to call middle-aged; decorum is the order of the day.

Jimmy is integral to the whole plot because it is he who has given Rita’s life structure and allowed her to become a more disciplined and focused songwriter. Between the hours of nine and three, whilst Jimmy is at school, Rita works away in her upstairs music room, strumming through chord changes, picking out the right melody, finding a handful of words before stirring it all together just as Jimmy stirs his beloved paints.

“I’ve given up smoking”, Rita tells me proudly, “And started going swimming every day”. This health kick is, for the most part, an effort to stay fit for her son, but a stronger singing voice has been a welcome side effect. Before the thought of singing on stage even entered into her mind Rita was learning her craft as a bassist.

After settling in Bristol aged 21 and inserting herself into the punk scene she found herself frustrated with the lack of female performers. “The stages were full of men whilst their girlfriends stood in the audience in their little skirts and high heels. I hated that, I wanted to get involved”. So she did. With a handful of guitar lessons given to her at the age of ten by a fortuitously musical nun under her belt, she borrowed a boyfriend’s bass and formed Rita & the Piss Artists. They played, they drank, they got booed off stage, they drank some more. It may not have set the world alight, but it brought her to the attention of duo God Bless You whom she subsequently played with for the best part of two years, during which time she observed their rigorous work ethic and learnt all she could about the art of songwriting. The final piece of the puzzle was the opportunity to duet on their cover of Lou Reed’s “Pale Blue Eyes”. Rita had found her voice, in every sense. 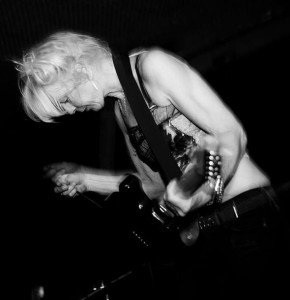 John Langley, drummer with the Blue Aeroplanes, is the musician whom Rita credits with getting her to really raise her game.  She extols the virtuosic skill and musicality of the man she still calls a band mate and a friend decades on. She felt she had to work harder, write better songs, play tighter guitar, just to be in the same room. Without these mentors she might not be the formidable songwriter we hear on ‘Anti-Social’ but she’d still be the same old Rita; no one created that determination or that fiery spirit, it was always her own.

“I refuse to lose, I refuse to fall down / Because you see it’s the monotony that’s got to me”

…sang Patti Smith on “Piss Factory”: words painted onto her squat bedroom wall by a 20-something Rita Lynch and words she’s lived by ever since.

The punk movement was incredibly important for Rita. The poetry and feminism of Patti Smith gave her inspiration; seeing a Rock Against Racism show at 17 gave her hope for a world beyond the “Little Ireland” of her upbringing; and the working class anger of John Lydon gave her the freedom to be honest about her own background and take pride in it.

The legacy of those early pioneers constitutes the DNA of ‘Anti-Social’. Whilst one couldn’t call it a straight up punk album, the anger that inspired it and Rita’s independent aesthetic is very punk indeed.  “Anger is an energy” Rita reminds me, quoting John Lydon, and since her son’s birth she feels like she’s had to fight for everything. It’s this struggle that has kept her young and prevented a lapse into comfortable domestication.

New single “Heart Of God” is the perfect example of Rita Lynch’s rock and roll. Based around a two chord riff, her guitar is the powerhouse that drives the whole song from start to finish. Her sharp telecaster is simple and primal, her vocals full of fire. The rhythm section of John Langley and Mike Youe push forwards with boundless energy. It’s a tried and tested formula – in many ways it’s nothing we haven’t heard before – but the key to success is to do something new or something old very, very well, and Rita Lynch does her unashamedly vintage rock incredibly well. The riffs are simple and catchy and her melodic hooks ring with punk authenticity. These songs don’t mess around, they get straight to the point. Rita told me how she’s become far more economical with her songwriting, negating long-winded introductions and complex structures. “Some of my [early] songs were over four minutes” she said, ever the punk.

The title is an interesting one.  Rita assures me that ‘Anti-Social’ doesn’t mean she’s anti people, rather she finds many of society’s conventions boring and contrived.  We’ve already covered her distaste for the egotistical anecdote, but I get the feeling Rita has been subject to a lot of expectations within the music world that she just doesn’t wish to fulfil. She has no interest in the games others are coerced into playing. Anti-social is also a reference to her son, who’s autism strips him of the basic social skills we take for granted, and because of Jimmy’s autism Rita must be strict with her time, occasionally having to turn away company so that she can continue writing.

During our conversation I come to understand that Rita has been somewhat of an anti-socialist all her life. From being a sickly child regularly off school, writing stories and poems for company, to the lone songwriter I meet today, Rita has always taken on the role of the observer. She looks at people, tries to understand them, and make sense of them. It is probably this keen eye that prevents her from suffering the banal ego-massaging of the in-crowed, and certainly what makes her such an excellent lyricist. “Music can be very lonely”, she warns me, but I know it’s a small price to pay. For Rita Lynch, writing songs isn’t a choice, it’s a necessity. Some people lie on the therapists couch, Rita picks up a guitar.  These songs are not only how she expresses herself, but how she copes. It’s the curse of the artist, but she wouldn’t have it any other way.

On Friday 19th December at Bristol’s The Exchange, Rita will unleash her new songs on the world. It promises to be an absolute masterclass in rock and roll performance.  She’s been at it a good while now, but unlike most, Rita Lynch just keeps getting better and better.

The launch party for the album will be on the 19th of December at Bristol’s Exchange and more details about the show can be found online here: bit.ly/Rita_Lynch_Launch. Tickets can either be bought from that link or here. The Facebook event page here: facebook.com/events/1477895515783295.

The first single off the album can be heard above and bought from Bandcamp (where the album will be available from tomorrow.)

Rita’s website is here: ritalynch.co.uk and she’s on Facebook too. The album will be released through Bandcamp when it finally drops and we recommend keeping an eye on the links above so you can pounce on that link when it finally gets made public.