Home Music Reviews Album Reviews To The Outside of Everything -A story of UK Post-Punk 1977-81 5CD... 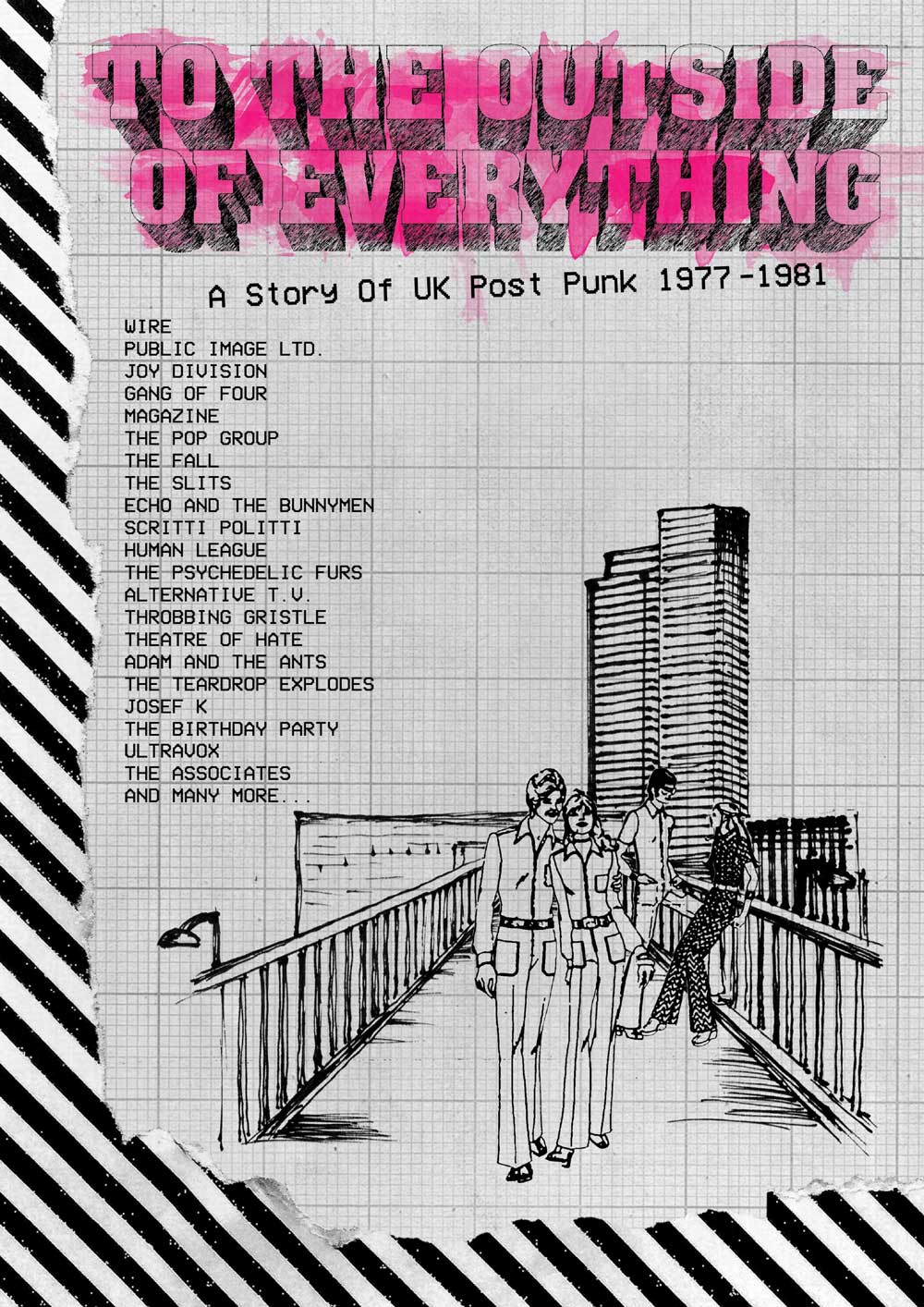 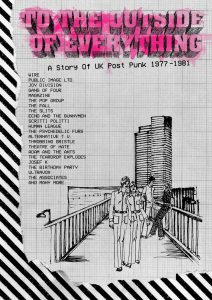 Previewed here, and now in the shops, this is a wonderful, wide-ranging overview of an era rather than a genre – but some people, like Ged Babey, will always nitpick….

This is ‘A Story of UK Post-Punk 1977-81’ and not the Definitive Guide to P-p-p-post hyphen punk. Audio snapshots of the days when, like now, there was just so much choice, so many possibilities… but some of them a dead end and like any experimentation, some of it yeilded inconclusive results…

Don’t get me wrong, this is a really great boxed set – worth the money; some classic, unbeatable music from a different kitchen,  And some curiosities and obscure gems…  but it’s the whole concept of ‘post-punk’ which I call into question here…

As the Press Release says: Post-Punk was a belated term adopted to describe the creative outpouring of largely independent music which flourished in the wake of the Punk explosion‘.   But if we are honest there wasn’t and isn’t any such thing as (a genre of music called) Post-Punk as this lavish, sprawling collections proves.  And this is why perhaps it fails to be as cohesive and linear as previous Cherry Red Box Sets.  The Goth, Mod and Indie-Pop ones had stricter parameters and distinct genres defined around musical form or stylistic identity rather than being as much of a nebulous catch-all.

Some of the artists featured on To The Outside…  had nothing but contempt for punk and used it as a stepping stone or to gain access to the music business and were happy to see it dead.  Gary Numan (Bombers -Tubeway Army disc 1)  admitted as much and you have to at least admire his honesty.  Adam Ant (Cartrouble -disc 3) too, now likes to dine out on his punk-past but only really wanted stardom. Ultravox! (Young Savage -track 1 disc 1)  were a classy glam-rock act and rode on punks coat-tails by accident as much as by design.

The further we got away from punk the more pre Year Zero or Prog Rock influences became apparent and admitted-to.  Even (my hero) Howard Devoto said he liked Camel!   The Fall  (Repetition disc 1) were always more into rockabilly and krautrock….. so in a way Post-punk was Anti-Punk.  Bands like the Psychedelic Furs  (We Love You disc 2) looked backwards to Dylan, Bowie and the Velvets.   Wire (I Am The Fly…) signed to ultra-progressive label Harvest. Punishment of Luxury ( Puppet Life -Disc 1) borrowed ideas from early-Genesis…  Mark Perry once said, something to the effect that ‘Punk was the blip on rocks timeline and things just carried on afterwards’; there was still Pop and Progressive Rock -only it did sound a bit different and was called New Wave and latterly ‘New Pop’ (by Paul Morley and Smash Hits) and Post-Punk (probably coined by Paul Morley as well…) eventually.

There are a few examples of art-school pretentiousness on the last two discs of this box – I won’t name the guilty parties. Listen out too for the ghastly pale imitations of Joy Division and the Cure masquerading as profound forward-thinking anti-rock.  There are about ten tracks that I guarantee you’ll only want to hear once…….which is a shame, because of the numerous omissions:- the Banshees, XTC, Scars, Bauhaus, Cure, I’m So Hollow, Prag Vec, Normill Hawaiians which could have taken their place.  A few of them were inclusions in the Silouettes and Statues Goth Box… and there are bands from the Action Time Vision set which appear and I would even cull a few from the Millions Like Us  mod collection to include as part of the ‘post-punk’ I listened to at the time – the Cigarettes and the Nips. But at least, lets thank our lucky stars that Toyah and the Jags weren’t included.

But it does include:

The full Tracklisting is here.

The well-known bands or ‘success stories’ if you like, all prove their worth with one song. (Ceremony sounds like absolute perfection after not hearing it for some years and The Friend Catcher  stands head and shoulders above practically everything else on disc 5.)  Some of the short-lived but influential bands are worth the price of admission;  Fairytale in The Supermarket by the Raincoats, Swans On Glass by Modern English, – the real classics don’t sound ‘dated’ to me at least. ( This will be a baffling and fascinating collection for any really young music fans with a limited knowledge of the era who investigate it in depth.  What is THAT?  What the fuck? )

What would have been an idea though – to show the evolution and strength of certain artistes and of ‘post-punk’ would have been to have 1977 and 1980 songs by the same band – obvious examples being Magazine: Shot By Both Sides and something from the Correct Use of Soap. Scritti Politti  The ‘Sweetest’ Girl as well as Skank Bloc Bologna … that would really show how quickly and unexpectedly things changed.

There is far more female representation here than in any ‘punk’ compilation, proving perhaps that it was After-Punk rather than during, that women really started having credible, creative and imaginative input into music on equal terms. Approximately one in six of the bands featured had at least one female member: the Fall, Au Pairs, Big In Japan, Flying Lizards, the Passions, Poison Girls, Family Fodder, Ludus, Blue Orchids, the Skodas,  Maximum Joy, Girls At Our Best and so on, as well as all-female bands the Raincoats, the Slits, and the Mo-dettes, (give or take a Budgie).

It is interesting to see that there are still quite a few bands still in existence (in some form) and touring and releasing great new material; the Membranes, the Cravats, Nightingales, Wire, Killing Joke, Blue Orchids to name but a few -perhaps proving that the strongest (artistically) survive the longest.  That’s not to mention of course the mighty Fall and the indomitable Gary Numan and Nick Cave – three of the giants who came out of the Post-Punk years.  The independent label which comes out ‘top’ in the consistentcy and ground-breaking stakes seems to be Mute.  From the seminal TVOD onwards (and upwards).  Factory had films made about it.  Cherry Red thrives but Mute has always had an idealism, took risks and followed its heart.

I sketched out theories about Post-Punk -based on generalizations and perceptions – being the Middle Class revolt to Punks supposed working class rebellion (but that was a lie anyway).  And about how Punks Chosen Format was the Single and Post-Punk was more about the Album (which I think is correct -to a point).

One of the options, which personally I might have run with, when compiling this five CD set would’ve been to have Disc 1 – Guitar Bands -doing new things with Rock’n’Roll.  Disc 2 -Electronics and experimental.  Disc 3 – the influence of Funk, Jazz, Reggae and World Music.  Disc 4  Female-lead, all-female bands. Disc 5 – the Exceptions / One-offs/ beyond categorization.

Maybe it is better that it’s a mixtape stew of Peel-like eclecticism.  It is an endlessly fascinating (and at times infuriating) collection. It is full of surprises both pleasant and not-so… but still an essential documentation of the era….