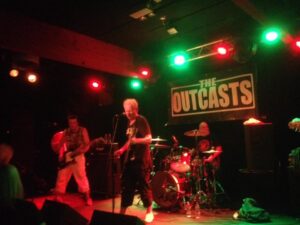 Ian Canty broke his ankle we know, but also seems to have suffered a bump on the head judging by this review of Norn Ireland ‘Good Vibrations’ artistes the Outcasts … who were on magnificent form it seems. They’re in Bristol tonight (Friday) and then Brighton and London on Saturday and Sunday.

I arrived at 221b Baker Street, the lodgings of the great Sherlock Holmes and gave his housekeeper Mrs Hudson my card (which reads “Ian Canty – Roomettes Reserve Team Captain 1978-80”) and brief details of why I was calling. In moments I was settled in a comfortable chair facing the consulting detective and his friend Dr John Watson, who was idly leafing through today’s paper. Holmes looked me up and down and said:

“Ah Mr Canty, I note you have recently spent some time in hospital and have sustained damage your left ankle.” This wasn’t that amazing as I was still supporting myself with a crutch as I made my way into the room. He continued:

“I understand that you have a strange tale that you wish to consult me on. Pray tell it to me in detail including laying out all the facts in front of me, so we can reach a conclusion in a logical fashion. Do you mind if I smoke a pipe whilst you do and I trust it is amenable for my great friend Dr Watson to remain, as I trust him implicitly”?

These formalities out of the way I saw the great man disappear in a cloud of thick tobacco smoke (at least I think it was tobacco) and began my tale.

“Last night I visited the charming hostelry the Talking Heads in the Portswood area of Southampton. If you wish to call on it during the course of your investigations, whilst consulting Bradshaw you will need to stop at St Denys Rail Station. Anyway I went into the rear part of the bar which is a music venue and there I saw the most extraordinary thing.

After the support acts the main band, a combination from Belfast in Northern Ireland took to the stage. Now these four men were in their 50s and arrived at the venue not by Hansom cab or a coach but a motor car. Apparently they were doing this recital as part of a mini-tour of the south including engagements at Bristol, Brighton and London.

I will now detail all the songs played by them, to make you fully aware of the quality of the material that was on display that fateful night, in the order they were played.

Now these songs were played for perfection – but the rum thing for me was this – how can men of their age play with all the energy, verve and vigour of men less than half their age? How can they effortless roll back the years and take the audience right back to the days of the Harp Bar without it seeming anything like a nostalgia trip, so vivid, so fresh, so good? Wonderful songs about youth and all the hassles of life that still have a pithy resonance in 2015, why if this was a new band they would just take over without even trying. How can it be, Mister Holmes, how can it be?”

There was silence for a minute. Then Holmes wafted away some of the pipe smoke and began to talk:

“It is elementary my dear Canty, what you saw was the fine Punk Rock outfit the Outcasts. At the present time they are one of the very best live acts you could wish to see. What and how they play is so fresh still because it isn’t built around a narrow timeframe or any trends, it’s from the heart. What you saw is a natural phenomena, but one rarely seen today. Skill, talent, power, love, hate and yearning all in a brilliant package

The Outcasts are, to coin a hackneyed but apt phrase in this instance, are the real deal. See them if you can – love them if you do”.

The remaining dates on this short tour which are not to be missed are;

Photo by Steve Kirk I think, well, nicked from his facebook. The only one I could find as people were too busy loving the band and dancing to ponce about taking photos.