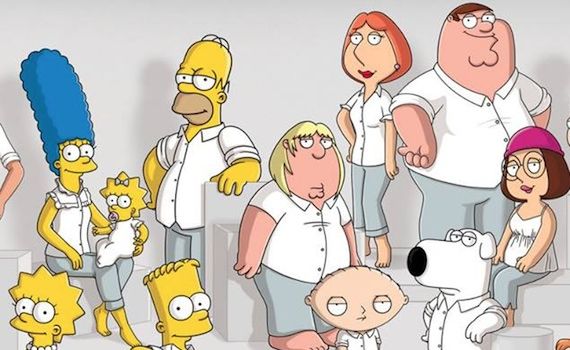 It was recently announced that the next season of Family Guy will feature a crossover episode with characters from The Simpsons in it. Dan Lucas isn’t happy about this – read on to find out his reason(s).

I’ll do anything you ask, just please, please, please don’t do this. I don’t live that far from Covent Garden: I’ll go there and debase myself, wanking for coins in front of millions. I’m not far from Kings Cross either and I’ll walk around the station singing Mumford and Sons songs. I’ll dress up in a nappy and suck a lollypop outside Selfridges on Oxford Street. I’ll pay to go and see a Michael Bay film, for fuck’s sake, but whatever you do, please don’t do this.

Of course, they’ve already gone and done it. Ben Elton wrote a piece for George W. Bush’s inauguration, Charlie Brooker did a sitcom for Sky and now The Simpsons has sold off its dignity and allowed Family Guy to cross over into Springfield.

Now, I love The Simpsons. I’m very much a manchild, someone who only started growing up in his mid-20s and the residents of 742 Evergreen Terrace (I didn’t even have to look that up) have been as great an influence on me as my own family. That’s not an exaggeration. A medical professional once asked me about my childhood and my feelings were beige. Ask me about the “Do it for her” sign in ‘And Maggie Makes Three’ though, or the single extended shot of Homer sat on his car and staring at the starscape over which the credits to ‘Mother Simpson’ play though, and I’ll be reduced to a blubbering wreck. Plenty of TV shows have heart but none have ever been so devastatingly perfect as The Simpsons was between seasons two and nine.

Even the later seasons, certainly of a lower overall quality, manage to produce the odd bit of genius. ‘A Totally Fun Thing Bart Will Never Do Again’ was a season 23 episode and was brilliant. It touched me in the same way the old ones still do and I admit I cried to the closing montage and final shot of an aged Bart passing away, all set to Animal Collective’s ‘Winter’s Love’ (the episode also opens with a montage set to Hot Chip’s ‘And I Was a Boy from School’). I won’t claim that the show is as good as it once was, but you can ask me any trivia question – seriously, anything at all – about the show and I’ll be able to answer it and that’s proof enough that, to me at least, it’s something I care deeply about, something that will always have a huge, important place in my heart.

As much as I love The Simpsons, I hate Family Guy. Not for reasons that are worth going into, because South Park already explained the awfulness of Seth McFarlane’s show with far greater eloquence than I ever could in the two-part episode ‘Cartoon Wars’. Still, when I learned that Family Guy’s next season would feature an episode in which the Griffins find themselves in Springfield, I died a little inside.

One of the best running gags (and there are few, which is a good sign of fertile creativity) on The Simpsons is Bart’s prank phone calls to Moe’s Tavern. “I P Freely”, “Amanda Huggenkiss”, “Hugh Jass”, “Ivana Tinkle”… these are some great lines. In the trailer for the crossover episode, Family Guy’s Stewie has a go: “Your sister’s been raped!” he cackles. OK, Bart’s reaction is one of disdain, but it’s still a gag that didn’t sit well with me. The innocence of Bart’s pranks, their giddy silliness, is replaced here by something crass and unpleasant. Part of the original joke is Moe’s overly-violent threats in response to discovering he’s been duped, but here “I’m going to pluck out your eyeballs and shove them down your pants, so you can watch me kick the crap outta you” is akin to how most of us would respond rather than a hilarious overreaction.

And this is the thing. Family Guy is, objectively, of a lower standard of humour than The Simpsons. Whether you like it or not (and I won’t judge you), it’s a purveyor of base toilet humour. McFarlane’s shtick is being politically incorrect whereas Matt Groening’s show always stood up for the little guy. Homer Simpson is a dumb everyman to whom we could relate, whereas in Family Guy we’d be expected to sympathise with Mr. Burns.

The crossover episode is going to happen, no matter how much I and like-minded fans would give to prevent it. I have my own thoughts on the merits of Family Guy’s brand of humour (those thoughts are probably pretty clear by now), but leaving those aside there’s no question that in this episode the tone of The Simpsons, the atmosphere of Springfield, will be altered. This is the problem for me: the town has changed since its golden days, sure, but it’s never taken on a tone like this and said tone will upset me. It’ll make me sad. It will damage something that’s important to me like no shoddy writing ever could. In allowing this, Matt Groening has become Lisa the iconoclast: why not remember how Lisa dealt with the truth about Jedabiah Springfield?