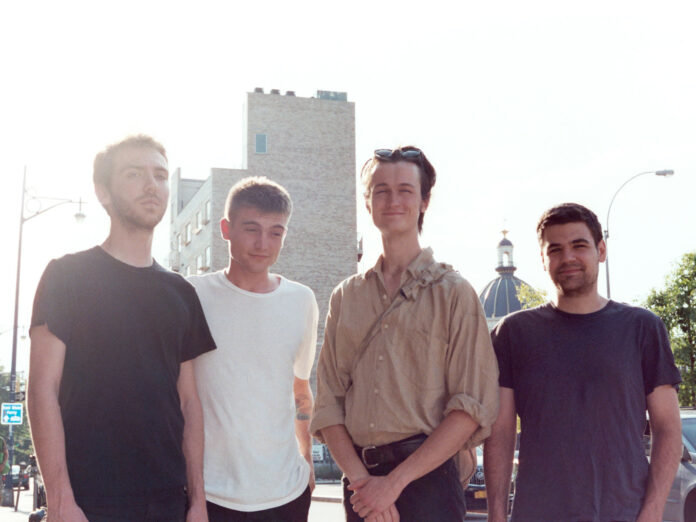 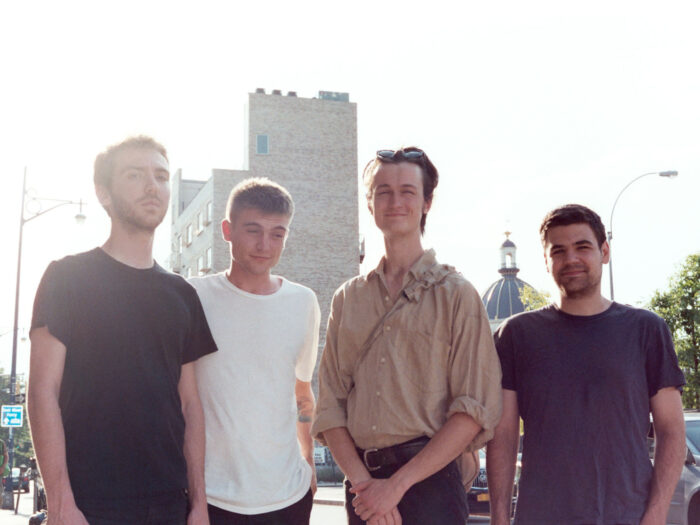 It’s been amusing witnessing the befuddlement among rock critics after Montreal-based noise rock/post-punk unit Ought dropped their marvelous debut More Than Any Other Day and followed it up with the equally awe-inspiring Sun Coming Down. After witnessing the band’s final gig of the year at Nijmegen’s famous old venue Doornroosje, I became convinced their ability to befuddle is a common trait amongst all great bands.

I’ve taken note of the numerous comparisons to all these iconic bands. The most frequent name drops include Talking Heads, The Fall, Pavement and Television. But truth be told, the sheer range of reference points given to Ought only feeds the notion that this foursome is a true original, one that refuses to be typecast by nostalgia (not that there’s anything wrong with that).

But it IS kind of nostalgic, isn’t it, to witness the intricate dynamic between these four young men on a live stage. Each band member brings their own distinctive idiosyncrasies to Ought. Tim Darcy is the band’s magnetic court jester, frantically skimming between tortured conundrum and wide-eyed bewilderment. Blasé spoken word pieces, and wistful trilling vocals alternate, as if he’s performing a puppet show.

Instead of embellishing Ought’s sound space with a myriad of effects, the lanky frontman’s guitar playing is cauterized to the point where melody simply becomes this sharp spike piercing through Matthew May’s hazy canvas of synths and drones. Darcy tried his hand in folk music when he still lived in New Hampshire, which might explain why he wields his guitar almost like an extension of himself. He keeps his instrument close like a trusted confidant. And whenever words fall short, he meanders towards the amps the creates the perfect echo-chamber, as the rest of the band scurries around him.

May doesn’t mash his ivories with a melodist flair, but violently clusters them like some finger-painting genius in a perpetual state of fixation. Astoundingly enough, it’s bass player Ben Stidworthy who executes the bulk of the melody with staggering effectiveness. The way he carries Sun Coming Down‘s centerpiece track ‘Beautiful Blue Sky’ reminds me so much of Mission Of Burma, the way his playing occasionally steps out of bounds with the off-key note to highlight the overwrought tension of the music. During the menacing climax of ‘Never Better’ , Stidworthy suddenly becomes this destructive cyclone that reduces the rest of the band to a swirling mound of debris.

Aussie skinsman Tim Keen’s precision playing is another distinctive feature. Like The Ex’s Kat Bornefeld, he puts as much emphasis on texture as serving as the rhythmic backbone, utilizing the full scope of sounds of his kit, ranging from the ride bells to the rims of his snare drum.

Just don’t mistake Ought for a band who are simply content being the sum of these parts. This bunch embraces their respective quirks and oddities to the point where each member has plenty of leeway to explore the overall sonics individually. Simply put, this isn’t a prog band. Ought’s songs aren’t set pieces, but pliable emotional excursions that stretch and unfurl with a palpable sense of urgency. A fragile equation for sure, one prone to be compromised when the sound’s not right. Doornroosje’s PA seems set to “session band” throughout the set, which often times denies Ought to properly build on their finely-drawn frenzy.

But serendipitously, this makes the payoff all the greater. A somewhat flat rendition of set opener ‘Men For Miles’ is resolutely upended by the ravenous torrent of ‘Sun Coming Down’ and a spellbinding ‘Beautiful Blue Sky’, the song that highlights Ought’s ability to discombobulate the listener in a wholesomely positive way.

There is this weird dichotomy between Darcy’s arresting reiterations of life’s ephemera (“Beautiful weather today!” “How’s the church?” “I feel alright!”) and the group’s exhilarating upsurges. It instills this existential clarity of mind to the listener, to which Darcy pensively asserts a resounding “Yes”. To create such profound, momentous joie de vivre with such obtuse language is impressive.

The song that – in my opinion – truly crystallizes Ought’s emotional depth as a band is ‘Passionate Turn’, which oddly enough plays out more like a Rodgers & Hammerstein musical piece than a post-punk song. The wistfulness in Darcy’s voice, the earnestness of his lyrics and the almost orchestral approach with an elemental “rock” framework…it gives me shivers. Even with lyrics alluding to depression and despair, vocally, it maintains the hushed alleviating quality of a lullaby. It’s so touching…and in a way, strangely uplifting.

Of course, even when you achieve these strokes of brilliance, complacency always has a tendency to kick in. This was evident during a rather casually cranked out version of ‘Habit’, widely considered to be Ought’s best pure pop song. Almost vindictively however, Darcy and co. follow it up with ‘New Calm”s delirious mayhem. With nonsensical lyrics like ‘Who invited Paul Simon?” this ‘song’ seems deliberately conceived to ward off that complacency, turning mundanities into joyous mantra’s. Even when seemingly relishing in gleeful randomness, Ought still manages to hold up a mirror to the listener. Now, if we were to compare Ought to bands who achieved a similar feat, that very long list would – at the very least – become significantly shorter.