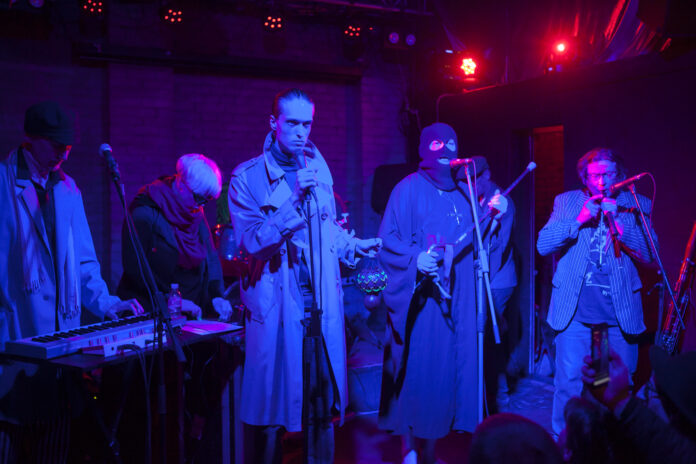 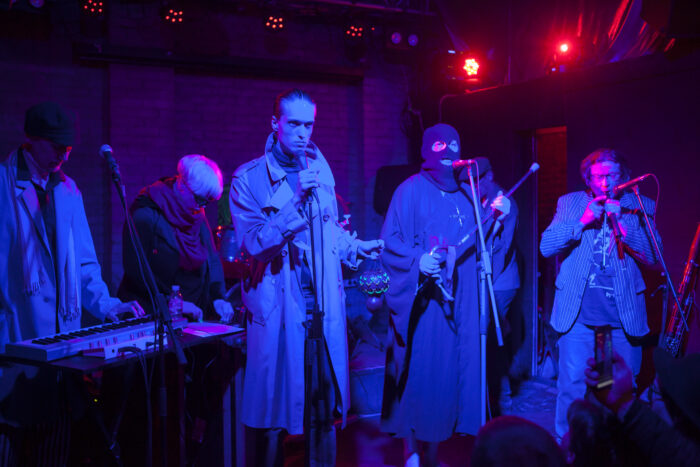 Despite the pandemic that seemed to extinguish any spark of live music, clubs and other venues in Russia bubble over with life as if nothing has changed. Three major events, the open-air Stereoleto, the Moscow Music Week showcase and smaller outdoor festival, Present Perfect, took place within the first two weeks in September, alongside numerous gigs that rescheduled for the beginning of autumn. Earlier we reported on Motorama, submerging their audience into the vibes of an 80’s nostalgia (possibly an alternative to the vaccine?). This time we bit the bullet and went to IONOTEKA NIGHT CLUB, possibly the most intriguing venue in St. Petersburg, which hosted a presentation of the record Live in Liverpool of OtZvuki Mu – a reincarnation of the legendary Soviet post-punkers Zvuki Mu.

Located on the territory of a former 19th century storage yard on Ligovsky avenue, the club is mostly hidden from the eyes of a wider public. While walking through the labyrinth of red brick buildings one might wonder whether a magic thread – if not a satellite map – could help find the venue.

The club’s building seems to be the only source of light at the dead-end of a dimly-lit lane. Perhaps, the light at the end of the tunnel for St. Petersburg’s creative, mainly emo-goth youth, craving for artistic freedom. IONOTEKA’s eponymous label has long been producing young talents who were initially struggling to find support elsewhere.

The inside of the club suggests the atmosphere of Manchester’s Band on the Wall and Berlin’s Roter Salon but with an individual freaky spirit and gothic charm all of its own. Positioning itself as a nonconformist venue, IONOTEKA seems to be a great match for a gig from a band like Otzvuki Mu. Forty years ago, when the original line-up of Zvuki Mu (The Sounds of Moo) was formed, Soviet post-punk/new wave scene was only beginning to take shape.

The band’s eclectic sound, infused with elements of avant-garde jazz, folk and art-punk, was perplexing for the audience at home and attractive for European industry. In 1989, they went to the UK to work on their debut studio album under the guidance of Brian Eno who was bewitched by Zvuki’s wild aesthetics. As Eno said to the New York Times, the band beguiled him with “their spirit, and an interesting poetical sense, an onomatopoeic quality”. The unique live image of the band was, so to say, shaped by its frontman Pyotr Mamonov whose performance evoked associations with exorcism practice and the “chthonic” world of Dostoevsky’s characters. Having split up with Mamonov a while ago, the band changed the name for OtZvuki Mu (The Echoes of Moo), yet have maintained the same concept. Musically, they are rooted in 1988-1989, the years when Soviet rock had unprecedented success abroad. It was then when Aquarium, the band led by Boris Grebenshikov, a nowadays venerated figure in Russian music, travelled to the United States to record their LP, Radio Silence for CBS. Despite the opposition between music scenes in Moscow and Leningrad, the two collectives shared an adventurousness and wild creative spirit.

As if to prove this connection, OtZvuki appeared on the stage in a company of charming Alexander ‘Fagot’ Aleksandrov, a bassoonist, composer and a former member of Aquarium. The band warmly greeted their audience, some of whom must have seen them playing in the late 80s. They instantly recognized the disco rhythms and funky bass riffs of ‘The Source of Infection’ (Istochnik Zarazy), the song from the debut album that sounds particularly topical these days. Resonating with the LED neon motto above the dancefloor, “Dance and Obey”, their music transforms some static figures into kings and queens of the dancehall. A couple of fans – a lady in her 40’s, wearing a low-neckline dress, and geezer in a leather biker jacket – embraced to perform some tango-esque movements.

The quirkiness of the former lead singer is compensated by a troupe of invited artists, some of which are impressive while others are a bit distracting. Mimicking the bouncy physicality of Mamonov, Phillipp Soloviev, a handsome frontman of a Moscow-based performance act NonAdaptantS, does not look like a natural fit for the band. He reminds of Detachments’s Bastien Marshal who acted as a live reincarnation of Ian Curtis at Joy Division Orchestrated. Too handsome maybe?

Though Mamonov’s presence is missing, the music firmly echoes that sound that attracted Eno when he first saw the band a year before they went to Britain. Some band members even play the same instruments, e.g. a Kramer XL-24 bass guitar. Chapiteau-esque eccentricity in ‘Crazy Queen’ (Sumashedshaya Koroleva), created with a haunting ticky-tock guitar riff, monotonous uhn-tiss rhythm and bouncy bass, impresses the audience as much as it did for the listenership of John Peel in 1989. During their stay in England, the band was invited by the legendary presenter to do a live session at his radio show. Four tracks recorded at the BBC studio are included as a bonus on the Live in Liverpool album which contains live versions from the UK tour. 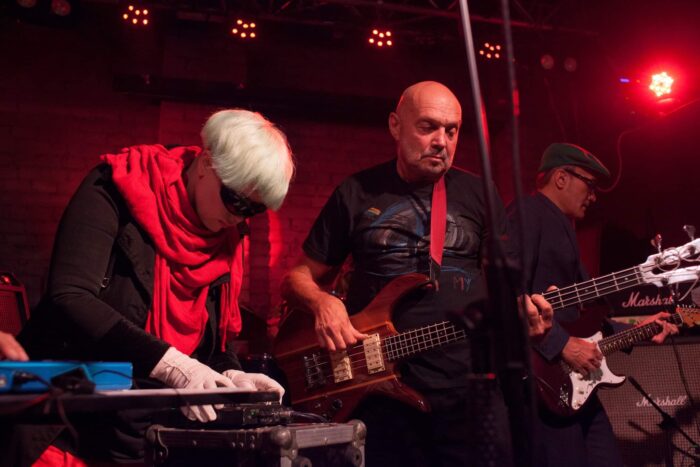 “You can imagine, what a challenge it was for the Soviet audience in the 80’s”, says Alexander ‘Fagot’, after the band finished playing ‘Gadiopiatkna’, a musical thriller that tells of an unknown terrifying creature inhabiting a Soviet flat. Though written almost forty years ago, some songs can be interpreted in the context of current politics. The band plays ‘Crimea’, a song from their second album, accompanied by German Vinogradov, a performance artist whose oeuvre lists some socially and politically inclined works. Dressed in a black cloak and balaclava hat, he sings lyrics that these days might sound “ambiguous”.

Impressive and agile, OtZvuki are not just echoes of the glorious past of Soviet rock, as stated in the name. They still burst with creativity which is all the more remarkable when the right conditions are provided. Luckily, IONOTEKA has them.