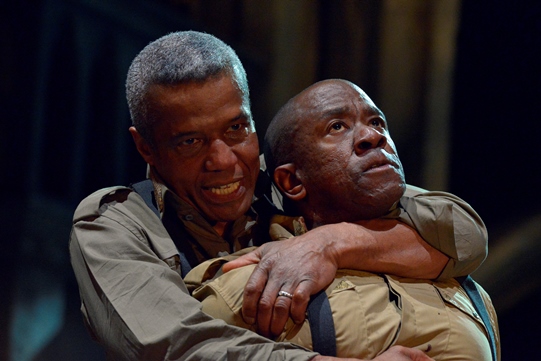 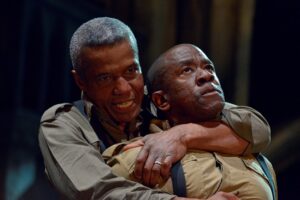 A frighteningly modern production with hatred so intense it makes for compulsive viewing. Louder Than War’s Dave Jennings reviews the RSC production of Othello.

“I hate the Moor” spits Lucian Msamati, and when he declares it again with some relish, it is clear that his casting as Iago has added a vital dimension to Director Iqbal Khan’s absorbing production at the RSC.

Artistic Director Greg Doran has made it clear that this season at the RSC will explore what it is to be an outsider and the decision to cast a black actor as Iago for the first time at the RSC forces us to look beyond racism to analyse the contempt in which he holds Othello. Msamati is simply outstanding as the scheming villain whose hatred for Othello is so intense it makes for compulsive viewing. He brilliantly involves the audience in his plots and exudes venom with his continued sarcastic references to “the Moor”.

Hugh Quarshie portrays an almost serene Hamlet throughout the first half of the performance, seemingly content to ignore the barbs aimed at him as a result of his marriage to Desdomona. However, still waters often run deep and he is happy to sanction torture, which has a frighteningly modern, Guantanamo-style, element to it. Quarshie has definitely immersed himself into the psyche of what is a very complex character and turns in a performance of controlled brilliance that has the audience spellbound throughout.

The plot unfolds on a Ciaran Bagnall’s well-designed set that evokes Venice perfectly, complete with canals and gondola and with costumes that suggest the city is in the grip of a post-modern paramilitary nightmare. Iqbal Khan also uses music in two master-strokes during the production. First when Iago, almost betraying emotion for the only time, sings a traditional Shona war song that prays for protection in the battle to come. Then Jacob Fortune-Lloyd as Cassio becomes involved in a rap session that swiftly develops into a menacing situation. We see depths to the characters during these moments that otherwise may remain hidden from view.

Joanna Vanderham is excellent as a Desdemona who is far from subservient to her husband, yet blissfully unaware of her unfortunate situation at the centre of Iago’s plotting. How far Quarshie’s Othello actually descends into murderous rage as a result of the scheming of Iago is debatable as we are offered glimpses of an inner brutality that may be pre-existing, none more so than when he attempts to torture the truth out of Iago with a plastic bag over his head in a gripping yet shocking scene. However, at the dark core of the play is the determination of Iago to destroy Othello (he manages to stick to his concocted story despite the torture he has endured) and the combined genius of Quarshie and Msamati ensure that this unfolds with a chilling intensity.

The Iago we see is a villain in the best traditions – bad simply because he can be. We are offered glimpses of the reasons for his resentment, notably seeing Cassio gain the promotion he feels is rightfully his, yet there is undoubtedly a lot more lurking below the surface of Msamati’s gripping portrayal of what is almost certainly a psychopath. At the end of the performance both Hugh Quarshie and Lucian Msamati are visibly drained then re-energised by the ovation that follows. A simply outstanding production.

Photograph by Keith Pattison and courtesy of RSC. All words by Dave Jennings. More from Dave can be found at his Louder Than War Author Archive. He is also on Twitter as @blackfoxwrexham.