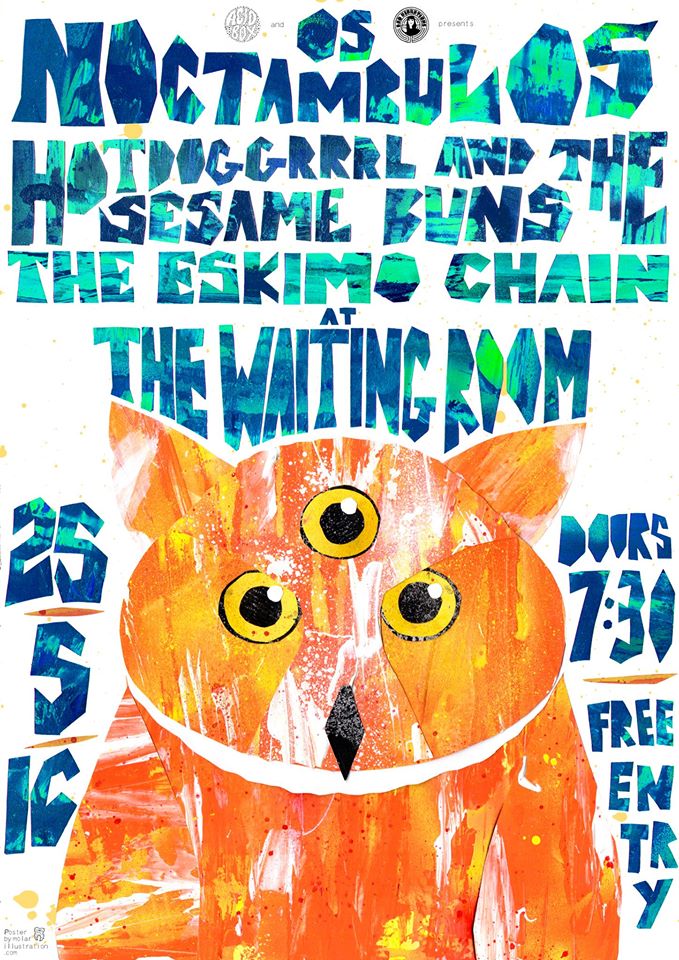 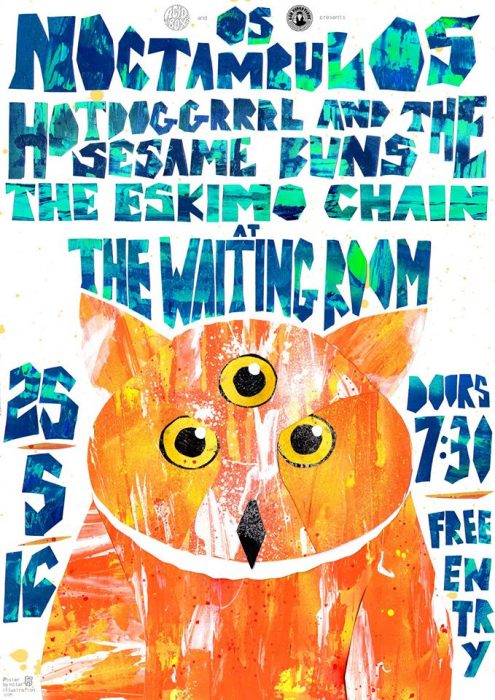 Paris’s finest garage rockers return to the UK for their longest tour (yet). Louder than War’s Craig Chaligne reviews their London date.

Due to release their new album “Stranger” on the 15th of July, Os Noctambulos stopped in London at The Waiting Room located in the heart of trendy Stoke Newington. Accompanying them on the bill were Psychedelic quartet The Eskimo Chain and “all out assault on the senses experience” Hotdoggrrrl and The Sesame Buns, both bands being based in Hackney. Eskimo Chain proposed some interesting songs with well developed instrumental passages, lead guitar player Patrick Smith has to be saluted for including some interesting chords in the bands song.  “Hotdoggrrrl and The Sesame Buns” were an altogether different proposition, definitely to be filled under the garage section, their abrasive sound coupled to some rather “risque” lyrics certainly savesthem from falling in the boring camp. However a whole set of their material gets a bit difficult to digest.

It was then time for the night’s main attraction to jump on stage. Os Noctambulos are now firmly established on the European garage rock scene. Their debut LP “Corsica Gardens” was greeted by great reviews all around (Shindig, leading French music mag Rock’n’Folk, Louder Than War) and they have several British tours under their belt. The gig started with the pulsating surf instrumental  “Polly”, a track that wouldn’t have sounded out of place on a Dick Dale record. Quite a few unreleased songs were aired proving the band is constantly working on new material. “I Can Read Your Mind” saw singer Nick Wheeldon bringing back Sky Saxon from the dead while Coline Presley’s driving bass line on “Living a Lie” powered the song along to great effect. The classics of the first album still are a pleasure to listen to (“Forever”, “Forget Everything”, “Wild”…). As expected the setlist featured quite a few tracks from the bands forthcoming second album. These new songs (such as the stomping “Jordi Taught Me”)see the band stretching their sound towards a more psychedelic angle.

All words by Craig Chaligne. More of Craig’s work for Louder Than War can be found in his author’s archive .