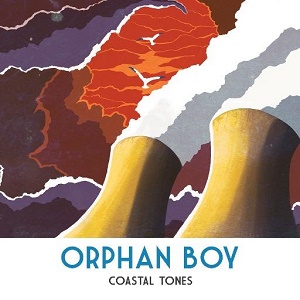 Cleethorpes-based indie oiks Orphan Boy make good on a five year promise by delivering what is arguably one of the strongest comeback albums of the last few years. Louder Than War’s Dave Beech successful avoids hyperbole. Sort of.

Whilst Orphan Boy’s first two records are best appreciated as products of their time (2007 and 2010 respectively) thanks to the clattering street urchin indie they contained, their latest effort Coastal Tones feels much less bound by the constrictions of any given genre, and as a result is a more matured and far less fragmented record than either of its predecessors. Gone are the up-close profiles of the council estates that leant their name to the band’s self-styled brand of ‘council-pop’, yet the romances, or rather sense of romance, that was forged within them remains.

Undoubtedly, this is something that stems from Orphan Boy’s relocation back to their hometown of Cleethorpes, from Manchester, and whilst the influence of urban industry can still be felt throughout Coastal Tones, the bucolicism of “misty mornings” and “an English garden”, as well as references to the Pennines give the impression of the band looking at their hometown fondly yet from a distance, masking the imperfections highlighted in earlier releases.

Such references are rife across the course of Coastal Tones, and Orphan Boy’s appreciation of rural and regional England is never more pronounced than on From the Provinces. Coming at the halfway point of the record, and highlights “all those places you forget about” but were crucial not just to the early days of Orphan Boy, but even now they have a solid reputation behind them – a reputation forged in places larger bands neglect to play.

With Orphan Boy crossing that milestone from their late 20s in to their early 30s during the five years since the release of Passion, Pain & Loyalty, it’s obvious that Coastal Tones would harbour a distinctly more matured aesthetic than anything it proceeds, and tracks like On A Nelson Skyline or the eponymous Coastal Tones don’t disappoint. Established fans will be pleased to note however, the chaos of the band’s live shows won’t be hampered by the record, as Bury Your Stars just invites a stage-invasion whilst previous single and opening track Beats Like Distant Tides has already proven itself to be an anarchic live inclusion.

It may have been a long time in the making, but for that reason Coastal Tones is probably one of the strongest releases of this year, and offers up a much more timeless sound than anything Orphan Boy have given us before. Perhaps more importantly however, it feels like this is the Orphans taking their first steps in a very definite direction; where both Pain, Passion & Loyalty, and the band’s debut Shop Local felt somewhat disjointed or erratic, Coastal Tones is effortlessly seamless, showing us not just where Orphan Boy are now, but where they’re heading in the future.