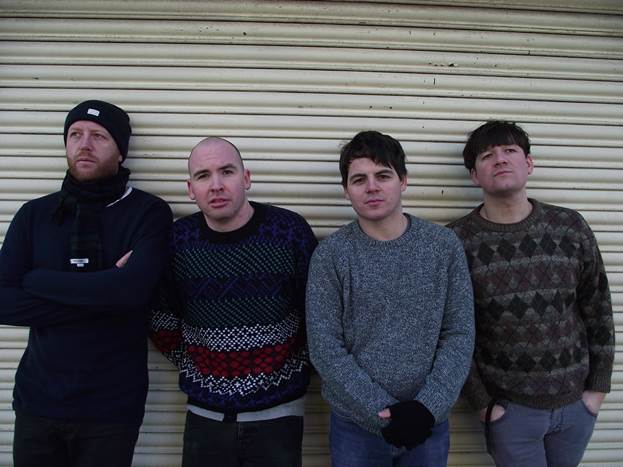 We recently ran an a live review of Orphan Boy by Katie Clare in which she enthused about their classic rock style and raw energy. She also referred to their new single which at the time hadn’t been released. It now has though and Dave Beech reviews it for us below.

That Orphan Boy’s new single Beats Like Distant Tides is interested in finding beauty in the mundane comes as little surprise. Moving from Cleethorpes, to Manchester then back again, theirs is hardly a story of glitz and glamour, but then such a story would never lend itself well to their gritty, self-styled ‘council pop’ anyway.

That said …Distant Tides is a noticeable step up from earlier releases, and, being the first single since their ‘implosion’ in 2011, not only marks a new beginning for the band, but feels like one also.

“The character is searching for something but ends up in a race against time to find it. The longer he tries the more unlikely and desperate his search becomes,” states singer Bob Orphan.

“His search is a metaphor for a life spent searching for something that simply might not be there”.

Enigmatic perhaps, but the track’s narrative without a doubt draws parallels with pre-split Orphan Boy, who for two albums toured relentlessly and built a cult-like following the old fashioned way, yet never garnered the attention of the industry.

Given that, it’s easy to see why Beats Like Distant Tides is the driven track it is; propelled forward by a motorik synth and grim determination, it’s the sound of Orphan Boy not just picking up where they left off, but demanding to be heard. In that respect, their implosion, brought about through sheer frustration, was somewhat bittersweet. Coupled with the fact that their chaotic farewell show left the band with no sense of closure, meant it felt like there was unfinished business. …Distant Tides is the first example of that unfinished business coming to fruition and whilst its narrative might well be a metaphorical retrospect, Orphan Boy are most definitely looking forward.

Orphan Boy have the following live dates lined up…