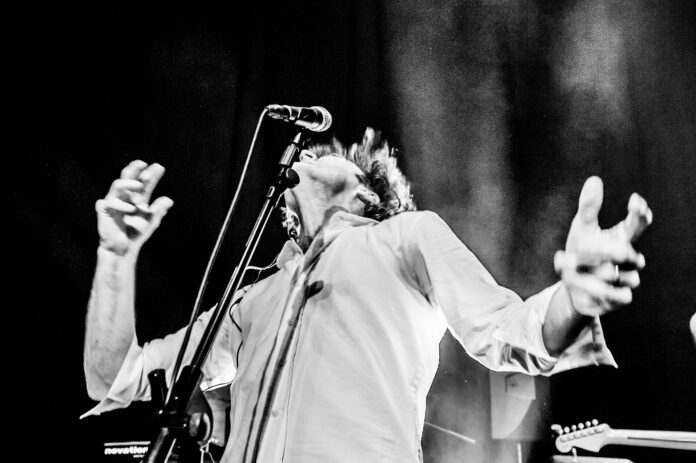 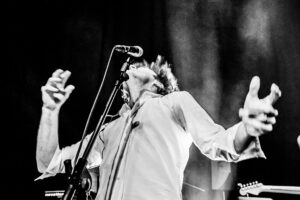 Orlando Seale and The Swell

Orlando Seale and The Swell have had an interesting run of singles so far, establishing them as an act unlike almost any other on the emerging indie circuit. With a background in theatre it should come as no surprise that Seale’s tracks are passionately dramatic. Louder Than War’s Tom Roden went to the band’s latest single launch at the Oslo, Hackney, to see how the sound translates live.

The showmanship that courses through Orlando Seale’s music is one that would be absolutely electrifying in a live environment, which sets the audience up for either elating joy or debilitating disappointment. There’s a tense air of uncertainty as the venue fills, which is ultimately fitting for a band that follow their artistic muse as opposed to any type of predetermined musical form.

As such the support acts are an eclectic bunch. Solo artists Adam Beattie and Brooke Sharkey have combined to form a one-off outfit that fuses both their folk-inspired sounds into one coherent, transcendent experience. An endearingly ethereal easing into the night transforms into a Yeah Yeah Yeahs gone Grunge maelstrom with The Graphite Set, before the pacing dips for an acoustic solo set from Richard Strange (of Doctors of Madness infamy).

By the time Orlando and the band are ready to take to the stage, the audience is both thoroughly disarmed of expectation and intensely eager to see where the night leads. Luckily for all those who came expecting an unforgettable display of showmanship, Orlando delivers. Opening his set with a megaphone-delivered monologue from Richard Strange, the band get straight to summoning the sounds of the apocalypse.

The drama of the tracks is not wasted. The band create a climactic wall of sound while Orlando delivers flawlessly powerful vocals with an animated stage show that pits the sensation of life against the heart-wrenching sound of suffering. Orlando himself is a bubble of pure exhilaration and excitement, always on the verge of bursting but never quite managing it.

Instead this bubble of excitement swells to include the audience, who devotedly immerse themselves in the soundscape and sing along. It’s rare to see a new artist command a venue so elegantly and expertly, but the audience surrender themselves to the emotional suplex that is new single “Wrestling” and the passionate plea of “Filthy Hope”.

By the end of the night the band have succeeded in turning a small venue in a grey corner of Hackney into a tent at Glastonbury. Orlando Seale is an artist, delivering not just fantastic indie drama but a full sensual experience – their latest single is even being sold with a bar of artisan sea-salt chocolate at the merch stand.

He has the charisma and openness of a less divisive Morrissey and the theatrical consciousness of a non-novelty Alice Cooper or Adam Ant. With performances like tonight’s, it’s a crime if Orlando Seale and The Swell haven’t swelled in popularity by the end of 2016.

This is Tom’s first review for Louder Than War.