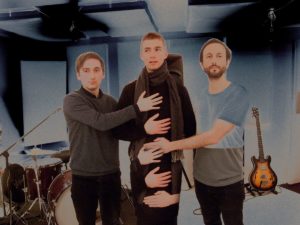 The brilliantly named Organised Scum are a London three-piece who have just release their first single of 2018, Unborn Cars. Organised Scum are Tom Duggins (Vocals, Guitar), Tom Williams (Bass) and Sean Canty (Drums) and the single was produced by John Martindale at Blank Studios and is being self-released on 9 March.

Releasing their debut EP in late 2016, Organised Scum were soon received support in the UK from likes of NME, Drowned in Sound, The Line of Best Fit and BBC 6Music.

From the cover art with the robotic arm holding a megaphone aloft, to their brilliantly named moniker, Organised Scum have everything going for them with this 3.52 of pop loveliness.

The synth heavy intro with the crisp vocals of Duggins sets the track up perfectly. This builds up and up with overlaid vocals and bass flourishes that add to the mix. The track gets heavier and louder and the overall effect becomes quite euphoric and an instant indie classic. It’s danceable, singalongable, and layered with lots of nods to the eighties, as well as a chunky and noisy synth that is very now.

There is a very 80s art-pop feels to this track that screams a wonky eccentric Englishness that remind one of bands like XTC and Field Music. I wonder what Organised Scum has planned next? This is great poppy stuff.