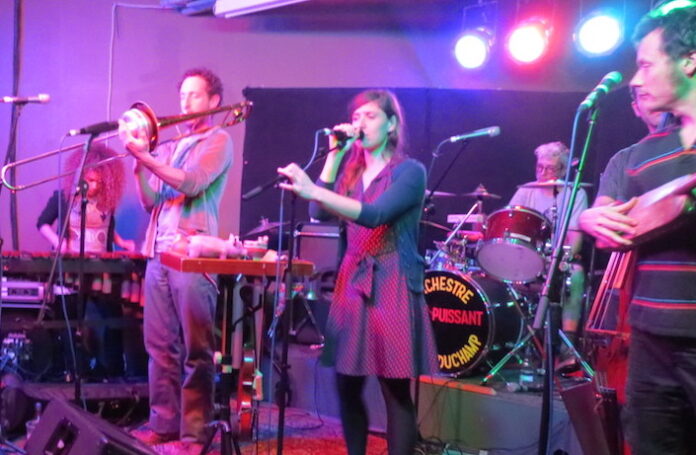 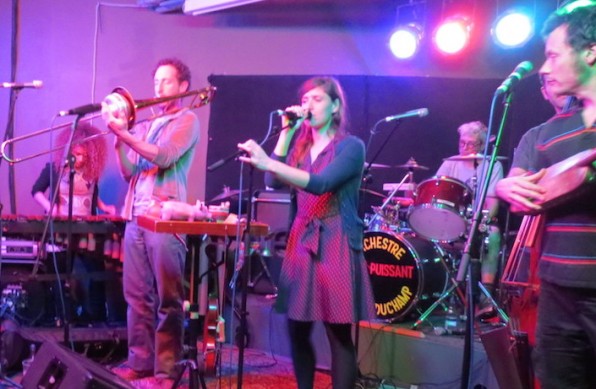 When he pitched to cover this gig for us Andrew Neal described Orchestre Tout Puissant Marcel Duchamp as a “jazz / punk / joyful noise ensemble” with Wilf from Dog Faced Hermans behind the drums. “How could we say no to a review of that?” you ask. Well clearly we couldn’t, which is why below you can find Andrew’s report from their recent Glasgow gig.

Make Orchestre Tout Puissant Marcel Duchamp gigs available on the NHS! It would be foolish hyperbole to suggest that they could cure major ailments but, for the duration of their set, I move with an energy which makes me feel 25 years younger. The Swiss based 6 piece with an array of instrumentation that barely fits on the stage, including marimba, double bass and trombone, prove that celebratory music does not have to be simplistic and conventional. They take freely from the spirit of post-punk, jazz and Afrobeat. Other reviews have mentioned experimental music but it all feels very natural.

A set, which is drawn predominantly from third album, Rotorotor, eases in with the serene shuffle of Slide before gaining momentum with Close & Different. Throughout, there is a playful nature, best exemplified by Mathias Forge taking a break from lung-straining work on the trombone to add a solo on toy miniature bells to Cranes Fly. OTPMD have a rare rhythmic fluidity. The deft drumming of Wilf Plum is enhanced by the interplay with Aida Diop’s marimba playing. The euphoric effect brings to mind Wilf’s years in the Dog Faced Hermans and is well illustrated by It Looked Shorter on the Map. 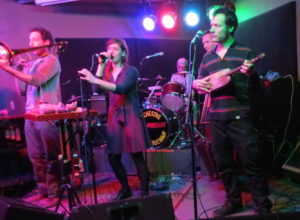 The set culminates with a boisterous call and response vocal on Apo and an ecstatic Tra La La that is at odds with the lyrics dealing with impending environmental catastrophe. They manage to maintain a positivity and energy of outlook though, as exemplified by Cranes Fly’s conclusion, “I say/aim for the sky/set your sights high/like birds do”.  For a fiercely demanded first encore, they offer their oldest song, a 6 years old Elephant, and their newest, started this week. The audience are determined the gig will go on for as long as possible and the band are hauled back for their interpretation of a piece from Chad. At the end, OTPMD look astonished at the ecstatic response they have generated and the audience grin broadly at what they have witnessed and the shapes they have enjoyed throwing. Liz Moscarola, who had looked under the weather during the soundcheck, seems restored by the performance, her voice pure throughout, the only sign of ill-health being when she requests a tissue from the audience.  Someone asks, “where are you playing next?” They reply “Liverpool” which suddenly does not seem too far. Catch them if they come to a town, country or even Continent near you.

Earlier in the evening, Sumshapes’ guitarist / vocalist, Jer Reid, warns at the start of their set, “we’re a loud band, I recommend ear plugs for all ages”, sensible advice from a band that eschews rock ’n’ roll posturing. This three piece are the classic line-up of Dawson, one of the later Death to Trad Rock bands (a scene defined more by what it was opposed to rather than having any archetypal sound), and true to that scene’s original ethos they have no desire for nostalgia and revisiting their old tunes. Sumshapes have a more melodic and funky edge than their previous incarnation but still have a democratic sound with vocals not being emphasised in the mix. They retain a love of stop/start rhythms and ridiculous time signatures but without the dry seriousness of some math rock. On the one occasion that Richie Dempsey, another phenomenal drummer, misses a beat, the whole band crease up with laughter. After doing 4 songs without a break, Jer announces, “it’s fun doing songs back to back but now I need a lie down and a hand rub”. An audience member immediately performs a hand rub. At the end of Itchy Eye, Handrub Man exclaims, “Jesus fuckin’ Christ. That’s amazing!” That could have been an apt review of Sumshapes’ whole set which concludes with a crunching Normal as Fuck.

The evening started in a quieter mode with acoustic bassist and solo artist Howie Reeve in buoyant mood, enjoying his third night supporting OTPMD.  Tonight, his 10 song set only includes two previously released songs; Yesterday’s Bread, which was met with isolated shouts of recognition, and Wounded Animal Reflex. One song, so new that it will not even feature on his third album, included an inopportune reference to avoiding photographs just as I aim my camera at Howie! His set contains what for many bands would be a career’s worth of riffs, his hands exploring all of the frets, switching between gentle and quaking chords. His songs can be touching and humorous, the set concluding with one including the observation; “plenty more fish in the sea/you’re an exquisite rainbow trout/plenty more fish in the sea/you’re an endangered species”.  Nights as good as these are rare but should be treasured.

Orchestre Tout Puissant Marcel Duchamp are on Facebook, have a website here: otpmd.ch/news.html and are on Bandcamp as well.

Sumshapes are on Facebook too, as is Howie Reeve.

All words by Andrew Neal. More writing by Andrew on Louder Than War can be found at his author’s archive.