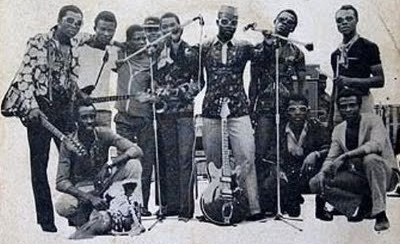 Announce details of the release of an album of new material, ‘Madjafalao’.

Benin’s legendary Orchestre Poly-Rythmo de Cotonou have announced the release of an album of new material. Madjafalao will be released by Because Music on Friday 28th October 2016.

Recorded at Satel Studio in Benin in early 2016 with Florent Mazzoleni and Burkina-Faso’s Eliezer Oubda, the track listing of the 10-track album is as follows:

The album follows the release of Cotonou Club in 2011 on Strut Records, their first new recorded music since the early 80s.

Founded in Benin in 1968 by bandleader Mélomé Clément, the band were hugely popular across West Africa throughout the 1970s recording hundreds of tracks and over 50 albums and playing alongside the likes of Fela Kuti during the decade.

With songs based on the vodoun rituals in Benin and taking musical direction from everything from traditional Beninese music, American soul & funk, Nigerian afro-beat, Congolese rumba, Ghanaian high-life and Afro-Cuban sounds, Mélomé Clément choose the name ‘poly-rythmo’ due to the variety of rhythms the band mastered and were able to play.

A combination of the deaths of original members guitarist Papillon and drummer Leopold and the country entering a period of economic hardship and decline under the dictatorship of Mathieu Kerekou in the early 80s saw the band go into indefinite hiatus.

However, a burgeoning interest in West African music in Europe saw labels such as Soundway and Analog Africa extensively and lovingly re-issue their back-catalogue and in 2008 the band reformed around Mélomé Clément, Gustave Bentho and Vincent Ahehehinnou and toured the world, visiting Europe (including a sold-out show at London’s Barbican Centre), Japan, Brazil, North America and most of Africa.

After the death of Mélomé Clément in 2012, singer Vincent Ahehehinnou, bass player Gustave Bentho and singer Loko Pierre decided to keep the Poly-Rythmo flame alive and after a few months hiatus they resumed rehearsals and started composing new songs, tracks which would eventually form the basis of Madjafalao.