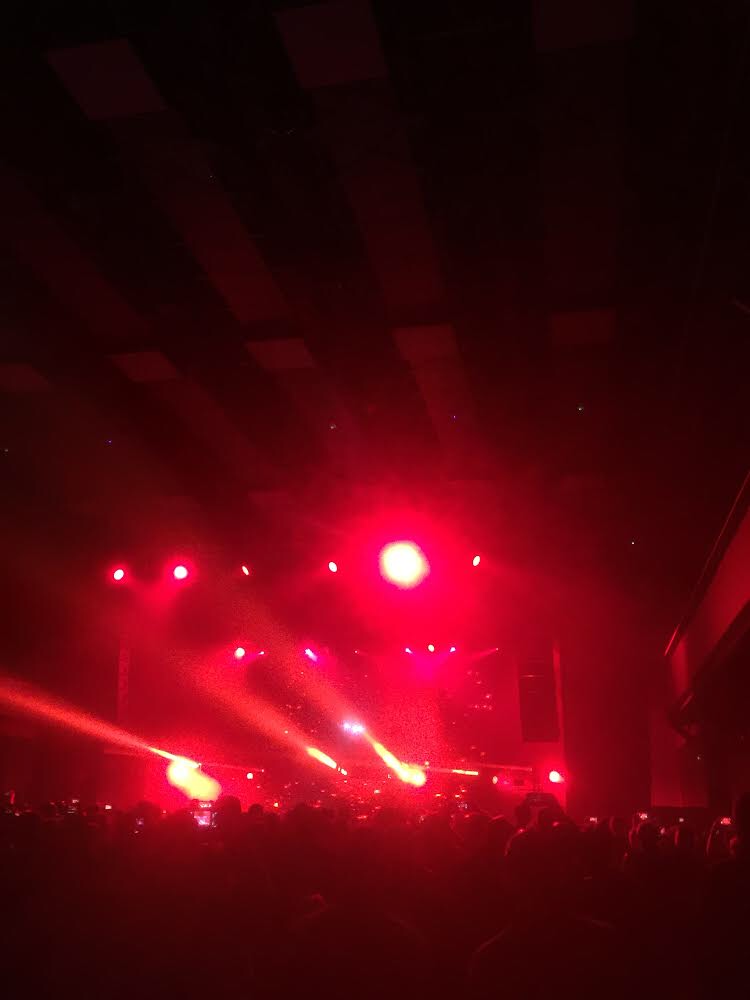 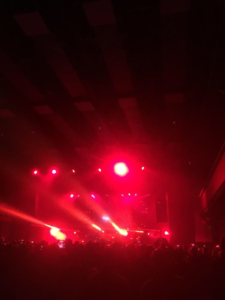 Soundedit Festival in Łódź in Poland is a five day event 5hat is built around the celebration of sound with famous producers from Zeno to Martin Hannett winning awards but it also packs a live lament in the wonderful venue that must have one of the best PAs I’ve ever heard a crystal clear behemoth that perfectly suits tonight’s bill.

Lodz itself is vastly changed since I played a gig here back in 1987 with the Membranes when few bands made the trio over the iron curtain. The city, like the rest of Poland, is no longer a broken system but very much a modern bustling rebuilt part of a modern Europe that it also seems to want to reject in that confusion of modern times.

I guess this won’t be the first time but there is some thing coolly conceptual about the gathering of Orb clans onto one stage at one festival.

Both outfits are rave veterans representing two idiosyncratic, yet equally groundbreaking, paths out of the cultural Big Bang of acid house.

For The Orb it was journey into an ambient cosmos where key player Alex Patterson merged his love of prog cosmosis with the adventure of punk and the possibility of electronic music. The former school friend of fellow traveller Youth from Killing Joke is sat backstage before the show regaling me with tales of his school days at one of those spartan and joyless public schools for kids from broken homes that he and Youth had to endure back in the lingering Victoriana of seventies UK.

Naturally rebelling against this cold and soulless environment, he and Youth were drawn into the punk scene of fragments of bands attempting to grab the moment with Youth joining the 4 Be 2s under the tutelage of notorious manager Jack Mcdonald before hooking up with the mighty Killing Joke who Alex became roadie for. Killing Joke’s dark, psychedelic heavy duty adventure suited them both – with the band’s interest in ground breaking, dance fused, keyboard flavoured, heavy tribal funk played with a punk intensity being a platform for both their adventures into dance culture a decade later.

The Orb became unlikely hit makers in acid house with long pieces of post Eno and Kraftwerk fused possibilities that they made their own with an stoned immaculate ambience even ending up on Top Of The Pops. Their ambient soundscapes provided a perfect solace and comedown from the wild partying of that era. Pioneers, they invented a whole new soundscape that these days has morphed into a more compact workout with beats and loops giving them a road worn live edge. Not that they have lost their sense of sonic adventure with much of the music and the backdrop videos retaining the bricolage of sound and visuals that was very much part of the initial punk experience of formative youth criss crossed with a Floydian show you can drown in and they are still mesmerising in their use of audio visual electricity.

Orbital are younger than The Orb but very much from the same kind of mindset. The band were named after the M25 London ring road motorway that runs near Sevenoaks – the town of their youth and were satellite kids looking for kicks in the pre acid house noise underground of bands like The Butthole Surfers who they famously sampled on ‘Satan’.

Acid house showed them the possibilities of the power of electronic music which they have brilliantly played with on a highly successful on/off career and they celebrate tonight in a stunning audio visual set of ideas and adventures that they somehow compress into slabs of danceable pop culture. The most heartening thing about the show is that the two most recently released songs P.H.U.K and Tony Affordable Cities are true high points in the set. The powerful and yet atmospherically melodic pieces that are like instrumental essays on where we are with their attendant brilliant films underline that this is a journey that is far from over and that they have not lost their political edge with P.H.U.K. being a stark and powerful sound collage that is a cry for help in the political and social carnage of Brexit.

Orbital always knew how to give good party and the mind boggling visuals redefine the word dayglo with  a mix of imaginative shape shifting digital dynamics, short films and blips and blaps of colour and morphing imagines with search and destroy lasers that mess with the mind and perfectly match the music. Ever inventive, the two brothers in their trademark light goggles, jam on top of their pounding chassis giving their music a morphing edge and the crystal clear sound and powerful PA give them a real energy and huge sound.

The kick drum is an almost perfect heartbeat and even on its own is a wonder to listen to, whilst the sonic foliage that they build around it combines to not only make you feel like dancing but also give your mind a good workout. This is deeply intelligent stuff and proof of the vitality of electronics that the6 have transcended so many times but it is also a great party and Orbital are truly at the top of their game as they still deliver those delicious bass rumbles that shake the building and an effervescent energy combined with a stark Ballardian raft of visuals that doesn’t shy away from these mangled and broken times making Orbital one of the most urgent and futuristic bands out there even after all these years.