Home News Oppose Nazis and racists in Dover on Saturday! 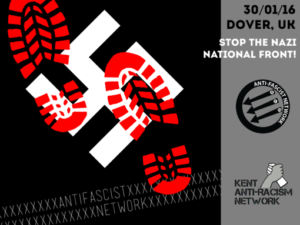 Nazis and racists are putting aside their differences to focus on their true passion, race hate, this Saturday in Dover.

This ‘Unity Demo’ is trying to capitalise on nonsensical right wing hysteria about suffering refugees fleeing war torn countries. The Antifascist Network, a network of local antifascist groups across the country, and locals Kent Anti Racism Network, will be standing firmly against them.

Crimes, are crimes. There aren’t refugee crimes, or Black crimes, or Asian crimes, they’re incidents of a nature within and of themselves.

When you racialise things such as violence against women and other abuse, you’re:

Capitalism, is capitalism. It exists to ensure a profit at the top, made from labour at the bottom. To make sure that gap is wide and profits are huge, it will even further exploit you and your labour.

When you blame immigrants for lack of jobs you’re:

…by not organising against them, but fighting against your own struggling, working class equivalents.

Some of the racist groups in attendance will be the openly white supremacist National Front, the anti Semitic North West Infidels and the African and Muslim hating Pie and Mash Squad (yep, much English, such proud).

As one AFN member, Janet Quadrant, said in an interview with Vice:

It’s incredibly important to mobilise, because the visible links between racists marching unopposed, the normalisation of racism and actual violence against minority groups are undeniable. You let them gain confidence in our areas and the attacks – which are already on a very sharp rise – will get worse.

If you wanna come, get in touch with your local group and see all the updates here. There’s coaches going from around the country and advice for anyone heading there. The Antifascist Network are always up to something, so give them a like on Facebook for regular updates.