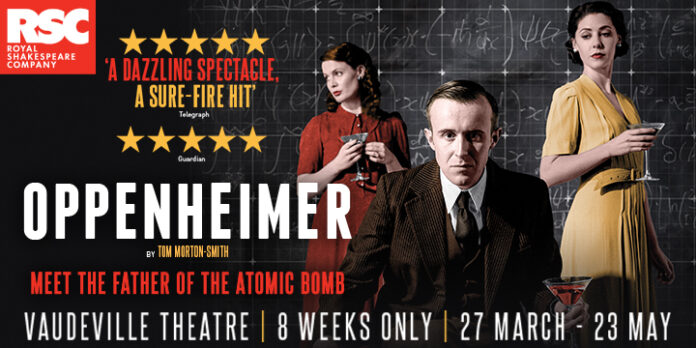 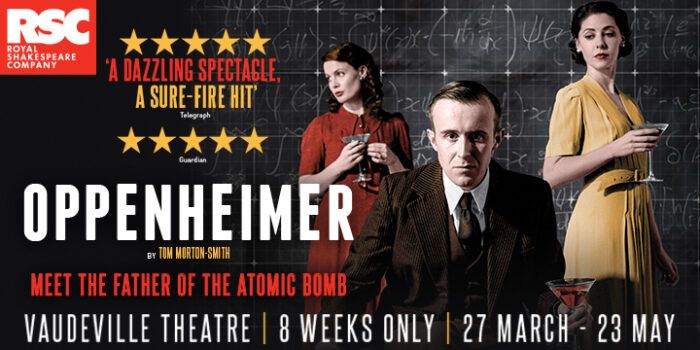 Oppenheimer’s run at the Vaudeville Theatre has just finished. Louder Than War’s Craig Chaligne managed to catch one of the last performances of this ambitious play.

England really has a wealth of excellent modern playwrights that manage to create entertaining pieces of theatre weaving together humour, history and contemporary events. Last year the Vaudeville was the host to the west end run of Handbagged, a play written by Moira Buffini examining the relationship between Margaret Thatcher and Elizabeth II that was first aired in its full length version at The Tricycle Theatre in Kilburn in 2013 .  Written by Tom Morton-Smith, Oppenheimer is probably more serious in content than Handbagged but it still manages to incorporate a few light touches in the midst of the hard hitting themes.

The two elements that triggered Tom Morton-Smith to write a play on Oppenheimer were the screening of a documentary on Hugh Everett III, an American physicist (better known to Louder Than War’s readers as the father of musician Mark E of Eels) and” Surely You’re Joking, Mr Feynman ?”, the autobiography of Richard Feynman, another American physicist that worked with J.R Oppenheimer at the Los Alamos national laboratory where the atomic bomb was developed.

Morton-Smith drew from the extensive literature generated by all the key members of The Manhattan Project. All the historic events described in the play are anchored around the complex personality of Oppenheimer (played by the excellent John Heffernan). A driven man determined to be the first to succeed in a creating an atomic bomb, he’s a curious mix . The beginning of the play sees him partaking in reunions with communist friends where he cautiously seems to endorse Karl Marx’s ideals. As the story goes by, however, he becomes consumed by his goal and his friends and family suffer as a consequence.

The content is quite dense and as the different characters ping-pong cleverly on scientific subjects, you must keep a close ear to what’s happening on stage. Angus Jackson’s directing and Robert Innes Hopkins’ set design manages to convey the sense of urgency and the determination of the people involved in the project to succeed (the idea of the cast scribbling mathematical formulas on the floor frenetically was particularly effective).

While Oppenheimer seems to be torn by his work and his personal life (continually hesitating between his lover Jean and wife Jackie) his closest collaborator Bob Serber (played by Jamie Wilkes) tries to keeps level-headed but a monologue about a field trip to Nagasaki to observe the effects of the bomb sees him struggling with what he helped to create. The musical numbers help convey the feel of the time when the members of The Manhattan Project were socializing at Los Alamos. Oppenheimer struggles to cope with his creation in the aftermath of the Hiroshima and Nagasaki bombings and the final tirade at the end of the performance (a masterful performance by John Hefferman) paints him as a man torn by his socialist convictions and that what he has helped to create killed so many people.

For further information on the play you can check its page on the RSC website: www.rsc.org.uk.