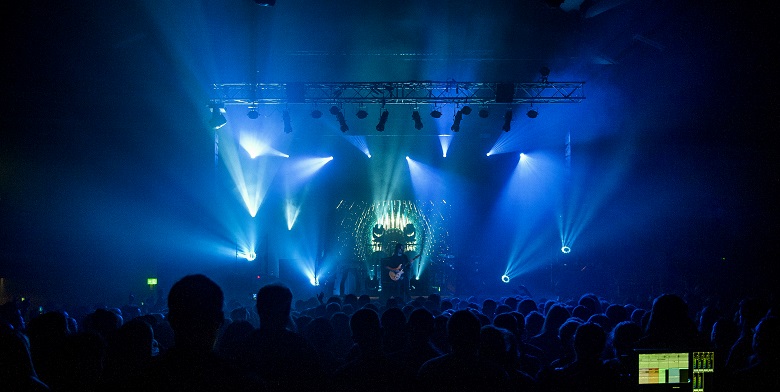 At the start of a trek across the UK in support of 2016’s Sorceress LP, Opeth put on a sublime show full of surprise inclusions and fan favourites in Manchester; a one-stop shop for all kinds of Opeth fans, if you will. 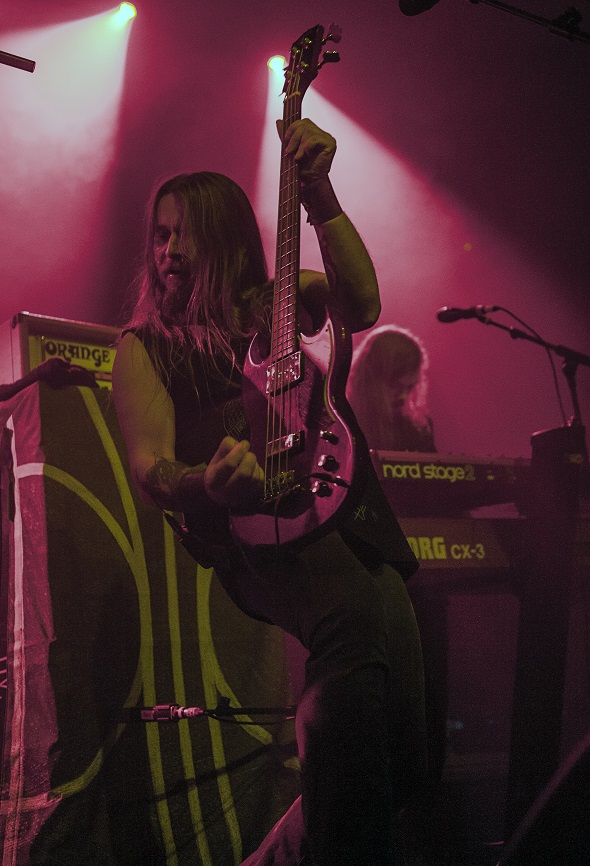 Support on Opeth’s Sorceress UK tour comes from the legendary Enslaved, who have also released an excellent new album in 2017 by the name of E. The Norwegian’s ploughed through a set full of matieral from their latter day career. Selections from E came in the form of the epic Storm Son, The Rivers Mouth and Sacred Horse. One Thousand Years Of Rain from In Times and a spellbinding version of Roots Of The Mountain from RIITTIIR made up the rest of the setlist. Not unlike Opeth, Enslaved have trodden a path that has seen them veer into more progressive territory. Their set in Manchester negotiated clean and growled vocals to great effect, as well as the continued use of keyboards to enhance their epic sound; especially on set closer, Sacred Horse.

It has taken Opeth a while to hit these shores with a tour of 2016’s Sorceress. As a band that has always done things on their own terms, Opeth break down touring into smaller chunks to make the grind of touring easier.

Opening up with Sorceress from their last LP, the band entered the stage bathed in heavy lighting to Popul Vuh’s Through Pain To Heaven and clinically swept through the album’s title track. Whilst definitely leaning away from the traditionally heavier side of music, Sorceress is still one extremely heavy piece of music. The chugging and crunching riff that powers the track after the jazzy introduction sounded immense in the Ritz and Mikael Åkerfeldt’s vocals were sublime. For all the calls of Opeth’s veteran fans to move back towards growled, typically death metal vocals, Mr Åkerfeldt has a perfect and unique voice for clean vocals.

Other selections from Sorceress included The Wilde Flowers and Era. The former gave the Åkerfeldt and Fredrik Åkesson (lead guitarist) the chance to show off their solo skills amongst the quite complex composition. Era is a more hard rock song that is still full of glorious twists and turns amongst its shorter duration; it’s as close to a straight up heavy metal song as you’d find amongst the Opeth discography.

With a smattering of newer material in the ten song set, it was a thrill to see which other tracks would make the cut from the bands epic catalogue. Immediately after the opener, Ghost Of Perdition from 2005’s Ghost Reveries, was the first of several bludgeoning, vast pieces that moved between extreme death metal sections, to solemn and serene passages of music. The extremity of the music in Ghost Of Perdition had the masses enthralled, and the vocal melodies in tune with the guitar lines were hypnotic. 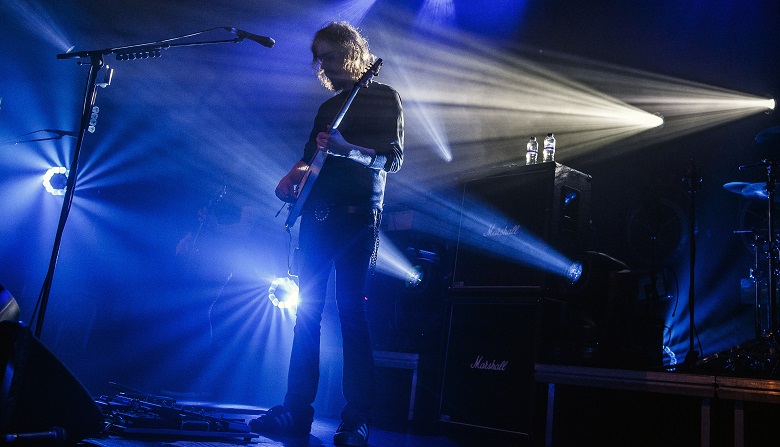 2008’s Watershed saw an increasing use of keyboards and the progressive influences of the band creeping through. From this record the band chose to include Hessian Peel. A song that feels like it could be split into two parts, Hessian Peel builds with the setting of the scene before moments of sheer brutality in the music at the mid-point. It again showed Mikael Åkerfeldt’s ability and prowess as a vocalist to move between styles so freely and execute the styles with aplomb. Flanking the band was a screen which displayed images to accompany the songs – with Hessian Peel, the frenetic sections of the song were backed with frantic visuals.

Slower and delicate pieces of music came in the form of the astounding Windowpane from 2003’s Damnation LP, and Häxprocess from the continually divisive Heritage LP.  Häxprocess felt like it was included out of stubbornness to represent an album that the band clearly likes. It marked the change in Opeth’s style and to this end you can’t fault the band for its inclusion. The guitar solo that concludes the song is wonderfully emotive, but felt lost on some of the crowd wanting older material. 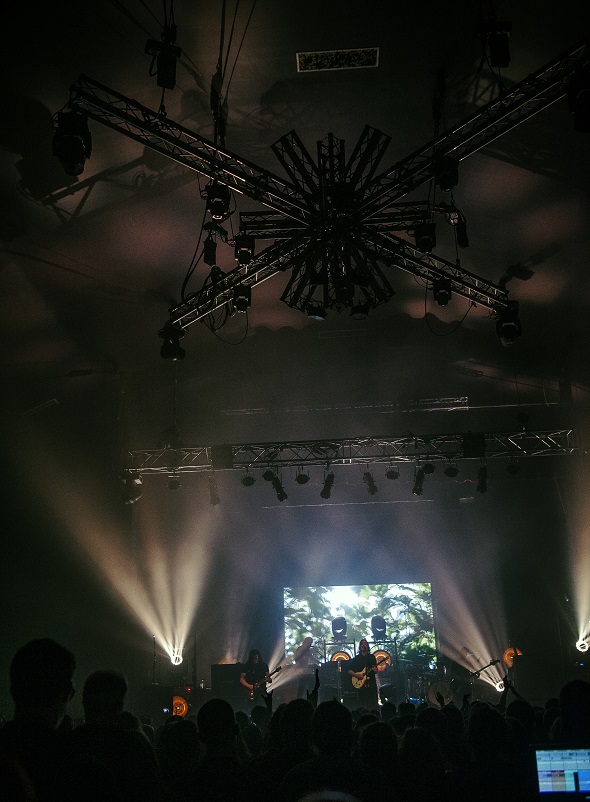 The mid set ‘break’ from heavier material was broken by Moon Above, Sun Below from 2014’s Pale Communion. Martin Axenrot’s drumming was a highlight during the hefty composition. The amount of rhythm changes in the song is up there with your average Iron Maiden epic! With a short moody mid-section that is reminiscent of Pink Floyd’s Echoes, this track led to things finishing heavy. The song bursts into life again at its conclusion as the band’s collective voices came together in majestic, unnerving harmony.

Perennial fan favourites in the form of The Drapery Falls from 2001’s landmark Blackwater Park and the heavier than hell Deliverance from the album of the same title rounded out the night. Both tracks served to take up nearly thirty minutes of the evening’s music. The Drapery Falls again showed off the beauty and the beast of Mikael Åkerfeldt’s amazing singing voice. Deliverance is a pure death metal onslaught, and those thirsting for Opeth in full brutality mode will certainly have had their thirst quenched.

Throughout the whole evening, Mikael Åkerfeldt’s delightfully sarcastic, wry wit kept the crowd entertained in-between songs. His self-deprecating, critical evaluations of whether they played a song well or not are always funny. He is a man alone in metal; there is no other character like him.

On this particular night, Opeth showed what a truly sublime act they are; intriguing perfectionists, unique visionaries, one of heavy metal’s truly great bands.

Live photography by Mike Ainscoe. You can find more of Mike’s work on Louder Than War at his author’s archive. He can be found on Facebook and his website is www.michaelainscoephotography.co.uk