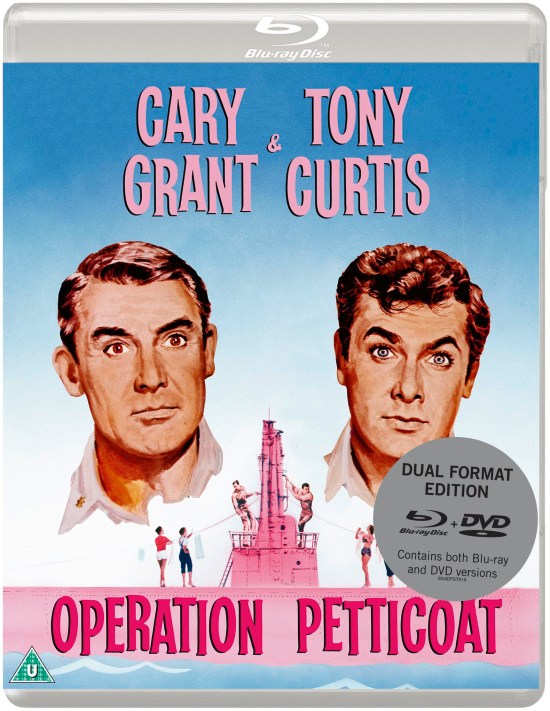 Jamie Havlin takes a look at a box office success featuring hijinks on the high seas with Tony Curtis and Cary Grant.

The Philippines, 1941. As Lieutenant Commander Sherman (Cary Grant) inspects a Pacific Fleet submarine, USS Sea Tiger, an attack by enemy planes proves costly. Not in casualties but in damage to the sub. As Sherman’s superior later puts it: ‘All you’ve got out there is a periscope sitting on top of a coupla thousand tons of scrap metal.’

Sherman continues to believe there’s life in the old sub yet. The squadron commodore eventually allows him to attempt to carry out repairs to the extent that it could be made seaworthy enough to travel to Darwin in Australia, where more extensive renovations can take place.

Easier said then done as we will quickly discover.

Most of the crew are transferred but one new recruit is reassigned to help out. This is Admiral’s aide Nick Holden (Tony Curtis). Does he possess the required skills to be of any assistance? Apparently not. He’s never set foot on a submarine and knows nothing of torpedoes, navigation or navel communications. His expertise lies more in designing recruitment posters and coordinating Navy Day parades in Milwaukee. But he claims to be an ‘idea’ man. Which translates that he’s a good ‘scavenger’. Which, in turn, translates as he can steal items vital to the chances of the Sea Tiger making it to Darwin.

Holden proves an unorthodox presence above and below water. He hires a local witch doctor ‘to ward off evil spirits and wish us a safe journey.’ After the ceremony, as the Sea Tiger splutters temperamentally into action, the witch doctor concludes that, despite his best efforts, they’re never going to make it. 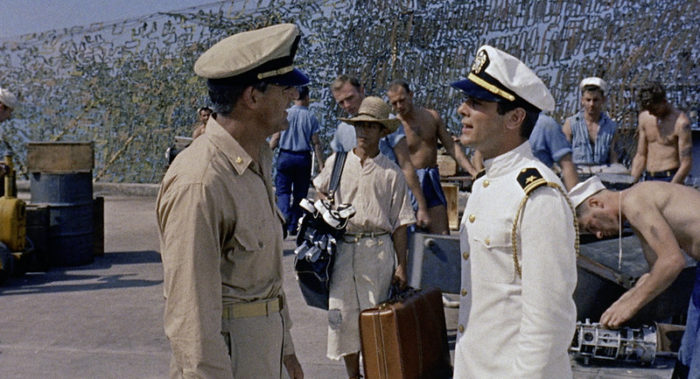 While Holden is dandyish and a chancer, Sherman is a straight-laced, by-the-book professional. A clash of personalties looks unavoidable, especially when Holden goes out of his way to rescue some five stranded female Army nurses. This obviously proves popular with everyone bar Sherman, who fears it will cause a distraction to his men.

‘If anybody ever asks you what you’re fighting for, one sailor observes, looking over to the woman, ‘there’s your answer.’

With the women on board, the submariners collectively perk up and the movie perks up too.

A torpedo aimed at a Japanese vessel somehow ends up sinking a truck parked on the shore, kind of.
There’s an unconventional New Year’s Eve shindig. A number of pregnant women swell the numbers on board then swell the numbers further with babies, before the underwater misadventures reach a climax with both the Japanese and American forces seeking to destroy Sea Tiger after it is painted pink. Yes, pink. I won’t spoil the reason why. 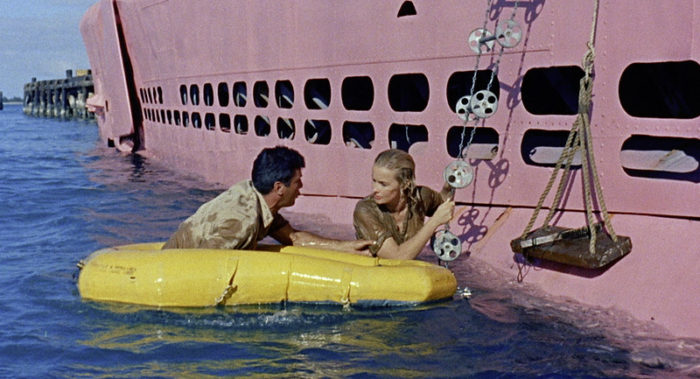 An American Das Boot this is not. But if you’re looking for an old-fashioned fun watch on a Sunday afternoon, Operation Petticoat is ideal. Some of the humour inevitably feels dated, but the underlying message is a positive one as in order to accomplish the mission, the men and women must learn from each other’s strengths.

Grant and Curtis were huge international stars when making this. Tony Curtis‘s popularity rocketed after the runaway success of his previous film Some Like It Hot (1959), in which he briefly impersonated Cary Grant. Grant meanwhile had won near universal praise for his last cinematic outing North by Northwest (1959). This isn’t as good as either of those two classics but together here, they proved themselves a top-notch double act.

The film received a single Oscar nomination. This was for Writing (Story and Screenplay – written directly for the Screen). It didn’t win, but it was a phenomenal success at the box office. Decades later it even spawned a TV comedy series which gave Tony’s daughter Jamie Lee Curtis an early role.

Eureka Classics presents Operation Petticoat on Blu-ray for the first time in the UK.