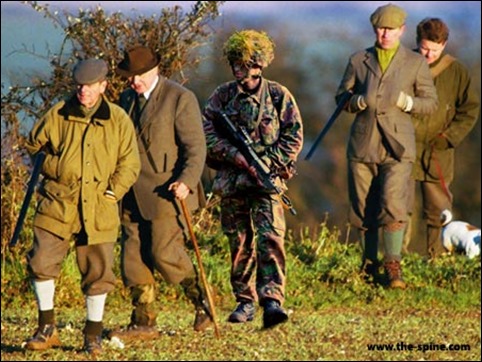 We were ‘treated’ to the usual fawning TV coverage this weekend when you and Prince William read out statements about preventing the hunting of endangered species across the world.

Now, you know me Charles, I like them animals and I was glad somebody was making a stand on their feathered and furry behalf from the nonsensical and cruel blasting away at them for ‘fun’ by cowards- who stand half a mile a way with a high velocity rifle- taking pot shots at an elephant the size of bus and feeling ‘in touch’ with nature at this act of gross and pointless cowardice.  All it proves is you have a steady hand and no heart at all as another magnificent animal is felled for a thirty second thrill.

These people don’t even eat the damned things. they kill them for fun and these are the people who tell us what to do and pretend to have some sort of high moral ground.

Of course, Chas, it was good to see someone take this stand against the vile murder of great beasts but the stench of hypcorciy and dusty old royals quickly filled the room as the not very comfortable realisation dawned that you and your sons choice of ‘sport’ is to do the same but to less rare animals.

As if that is somehow slightly better.

Now this is not a rant about the league table of animal rarity – surely shooting  a rare animal for ‘sport’ is as stupid as shooting thousands of small birds on some large estate that you somehow still own in ‘free Britain’.

Chas, we sit here confused at the moral ground you are attempting to claim here with your plea when you indulge in the equally spineless hunting of the less rare animals and we  appeal to you as fellow Goon show fans and worshiper of the late and great Spike Milligan – an animal lover- to stop this cowardly slaughter.

Chas, behind the blasting blunderbuss and the blood stained hands I believe you may be an ok person. You seem to have a sensitivity rare in your circles and as much  as I have no interest in the royals I don’t care whether they exist or not and the whole mad parade is your business but senseless slaughter is all our business and I’m appealing to you as a person with a heart to stop this barbaric pastime. After all if a kid on a council east went on the rampage with a gun in the local park shooting rabbit and cats he would end up in borstal and yet the same action by the ‘ruling class’ is somehow deemed respectable.

Chas, does this hunting stuff make you feel like a man? does it make you feel like some sort of ancient warrior running round the moors with your blunderbuss and the wind and rain on your pampered face? a lone warrior against the odds with your team of security guards, butlers and servants carrying sumptuous picnic hampers as you blow the brains out of small creatures to give yourself some royal wood?

I mean is it some sort of sexual kick or is it some sort of relic from a long lost past when cavemen would push mammoths off cliffs- because you have to admit, Chas, that was a bit more warrior like getting your hands dirty tussling with a huge and dangerous beast than shooting random birds out of the sky.

And young William- how about proving you are a ‘modern’ royal and pack in this ridiculous pursuit left over from the old days- maybe make friends with a stag instead of blowing its brains all over the moorland and leaving it writhing in pointless and revolting agony because it makes you feel good- I expect more of you as  a human being than this vile pastime.