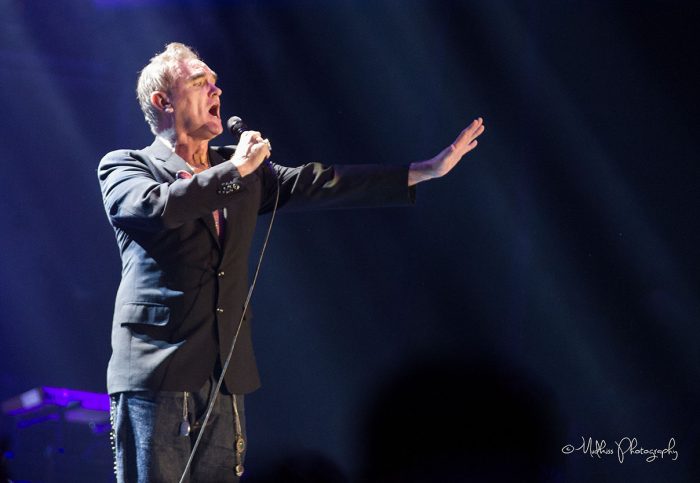 For your fans, the dogged celebration of the live gigs has been increasingly countered by the dreaded interviews. Interviews, which were once the playground of your wit read now like barroom diatribes with little of the perceived empathy and sensitivity that you were once loved for. For someone who was once a pin-up of the post-punk liberal – the world according to Moz has become an alien one.

The past few years have seen an acceleration in this kind of rhetoric. Initially, it had your fans thinking it was some kind of arch clever game soon to be replaced by a weary resignation, which has now been replaced by a resignation from buying tickets to your shows.

How has it come to this?

You once claimed to have been a fan of my music writing and we did email briefly, although who knows if these things are true. I believe in self-expression even if I don’t agree with what’s being expressed but wish we could find ‘Moz’ wherever he has gone.

Of course, we all know that pop is a con and as Noel Gallagher, of all people, succinctly put it ‘don’t put your life in the hands of a rock n roll band’. Disappointment is part of the fan process… disappointing albums, disappointing fallouts, disappointing interviews and mansion madness, disappointing struggles to find the quicksilver magic that made something that was once so brilliant, so full of magic dust so quintessential.

But it’s not impossible.

Your old mucker Johnny Marr seems to embrace the perceived Smiths spirit musically and politically and is doing it with a dignity the more you seem to move away from it. Your best pal, the wonderful Linder, is at the top of her creative powers.

Of course being a lifelong fan is about watching the trudge towards the grave and the snuffing out of eternal youth with the artist as the mirror to all our own inevitable declines, in pop culture growing older is by nature that hard part and the dogged fan still remembers that moment in their lives when everything felt so free and perfect and the soundtrack was killer but this is the first time we may have seen the ‘death by interview’. Your gigs were still great celebrations, your albums still had enough flashes of brilliance but every time you went to explain them the fans were aghast. It was once said that you invented the art of the interview filling the inkies with brilliant quotes that were part of the art of the Smiths. Now it’s the opposite. The world you want to live in is clashing with the one your loyal and beautiful fans believe in – the one you once helped to construct. It’s heartbreaking.

Morrissey, of course you were always pithy and difficult. It comes with territory. We all heard the stories. We heard much worse ones about other people. Who can survive in the choppy waters of pop culture without that acidic touch. But what your mass legion of fans projected onto you was that of hallowed saint and maverick spirit who spoke for them. Dangerous stuff.

And now you don’t. And it breaks their hearts.

Other rock stars have got away with talking the bad talk over the years but Eric Clapton’s fans are either more likely to embrace or not really care about his ugly speech onstage in Birmingham in 1976. Some of Mark Smith’s ramblings towards the end of his brilliantly creative life, like on the Channel 4 news were swerved. Morrissey, maybe you were unfortunate to have a sensitive, aware fan base who initially cheered you on but after Finsbury Park gave you a lot of leeway but have finally had enough. Speaking to Smiths and Morrissey fans over the years there was always that resigned look when interviews came up, that. ‘Oh god what’s he said now’ tone of voice.

It’s your right, of course, to speak as you feel and it’s also the army of fans right to finally give up on the ghost.

Where do you go from here? It looks difficult now. Retire to the mansion and the cats staring back at you as you rant to them about the world like some kind of latter-day Bridget Bardot? Tour the last few boltholes that ignore the dreaded interviews or get back in touch with the world you helped to create? Go the whole hog and stand for Parliament on your new ticket? Give Johnny Marr a ring?