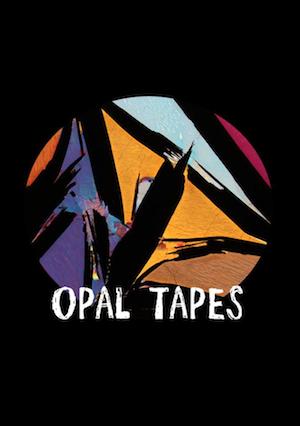 Opal Tapes has established itself in recent years as one of the most progressive and exciting record labels in the UK. Working with a diverse array of artists their focus is on the point where dance music and outsider aesthetics meet and collapse into each other. Some of the artists on the label have recently been playing showcases around the greater europe. Our man Paul Margree caught the London date.

Since its launch back in 2012 Opal Tapes has established its own distinct corner of the electronic music landscape. Its releases, originally just on cassette but now on vinyl and digital too, cover a rugged landscape of eerie, worn at the edges synth musings through to lumps of mouldy techno and scatterings of jittery house music, all the time sounding utterly distinctive.

Periodically label boss Stephen Bishop packs up his kit bag and takes a gaggle of his artists out on tour. These occasions are always worth catching, events that allow us to get up close and personal with the grainy textures of the Opal Tapes aesthetic, but without puncturing the shadowy bubble of mystery that surrounds the label and its artists.

Tonight, at Café Oto, it’s the first night of a European jaunt that takes in London, Bristol, Berlin, Paris, Amsterdam and Ghent. Bishop has assembled a tip-top cast for the tour, a triple-decker bill that includes Bishop’s own Basic House noisetronica alter ego, the blissful drones of Karen Gwyer and the dub sorcery of Dwellings & Druss, offshoot of Salford-based cosmonauts Gnod.

I’d only just managed to squeeze through the door of this sold-out show before Basic House began coaxing some unnatural throbs from the depths of his laptop. The haunted simplicity of Basic House’s “TV Illness” is one of my favourite pieces of electronic music ever, but tonight Bishop plays it harder, and chewier, pushing out a series of rushing drones with a rumbling bass chassis. His deep groove is punctuated by harsh, metallic drum fills and shards of white noise, and is enough to get the collected drone heads and noise dweebs tapping their feet and nodding their beanie-clad heads.

Anyone who is familiar with “Kiki The Wormhole” and her Opal Tapes long-player (or indeed her earlier salvos on No Pain in Pop) will be aware that Karen Gwyer knows her way round a drone. So it’s no surprise that Gwyer starts her set with a full-on glistening wave of sound, deep and pure, organ-like and almost baroque in its minimal chord progressions. It’s a bravura display, bringing in half-speed drums and wordless, echoing vocals to cook up something exceedingly trippy. Then, just as I’m about to disappear down a cosmic rabbit hole Gwyer switches things up, with a jackhammer beat and syncopated bleeps that bring a whole lot of Detroit to east London.

Talking of which, I remember when it was all warehouses round here. In those pre-gentrification days you’d sneak down to nights like Growth or Lost to be spannered by some severe bass music with kick drums that could drill through your forehead and scramble your brains.

Well, fear not because Dwelling & Druss bring a little bit of that ‘under the counter’ vibe to proceedings. Starting with a claustrophobic collage of sirens they take us into a world of toughness and echo with a grimy and apocalyptic skank. There’s a lovely moment, about two-thirds of the way through, where a series of sampled accordion loops resolve themselves into a kind of pastoral soundscape before a blurry web of footwork-inspired craziness crashes in and wrecks the idyll.

Phew. Despite the evening’s relatively short running time – no all-night chop-up, this – in just a few short hours Bishop nevertheless gave us a marvellous showcase of the diverse talents on his roster. If the last couple of years have seen Opal Tapes set out a path that’s put them on a level with some more well-established labels putting out genre-challenging electronic music (PAN and LIES spring to mind here), then tonight’s show is fine evidence that, for this label, there’s still no end in sight.

Opal Tapes can be found on Tumblr. Check out music by some of the artists on the label at their Bandcamp: opaltapes.bandcamp.com and for more tour information go to their Facebook page: facebook.com/opaltapes. They’re also on twitter too as @OpalTapes.

All word by Paul Margree.