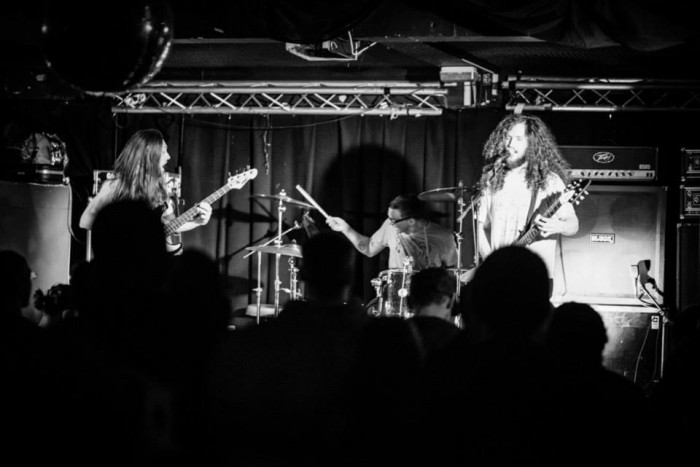 Some time in early 2013 Ken at Thrill Jockey tipped us off that they’d just signed a brilliant new band – a bit heavier than the bands they usually worked with, he said, but a band he knew we were going to love. That band were Oozing Wound and boy, was he right. They’ve recently been over in the UK for a short tour – one we were clearly not going to miss – so, after numerous album reviews, news pieces, interviews and video streams, we finally get to add a live review to all the other items on the site extolling Oozing Wound’s virtues. Philip Allen – hot footing it between the Exchange and two Seth Troxler RBMA events – was our man at the scene. With thanks to Rebecca Cleal for all photos.

Hailing from Chicago, their second album, ‘Earth Suck’ is an insane collection of some of the freshest crossover thrash this side of Purgatory. Their unique perspective on the genre has found them supporting the likes of High On Fire, Wolf Eyes & Black Pus in the few years that they have been together. 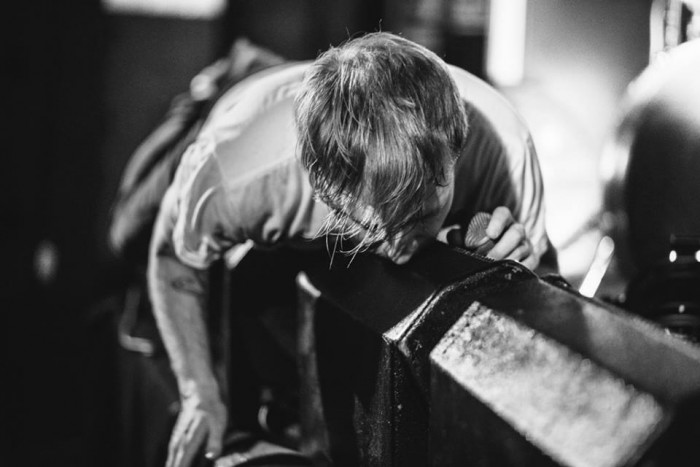 Support tonight came from PHOL & Ghold, who I missed unfortunately, but luckily, Leeds based Noise Rock behemoth Super Luxury were next to hit the ball out of the park with an intensity that was quite a slap around the chops. A track called ‘Kellogg’s Wasps’ was a particular favourite in the set, and with Jesus Lizard as a joyous influence, it’s hard not to like these guys bravado.

The first few moments of Oozing Wound’s set firmly pin my face to the back of the room with the sheer power and volume coming from the three-piece. The frantic guitar and vocals of Zack Weil are totally out of the mid to late 80’s scene from which Slayer & Morbid Angel sprang, matched with Kevin Cribbin’s huge fuzzed out bass and Kyle Reynolds’ frantic drumming style, they make a formidable racket, as tight as it is loose. Tracks such as, ‘Going Through The Motions Til I Die’, ‘When The Walls Fell’ & ‘Bury Me With My Money’ pummels the audience, who are for the most part crazy for it, so crazy Zac has an male admirer touching his thigh throughout his band’s set in appreciation. Fever pitch takes hold as ‘Hippie Speedball’ slams hard on the ears, forcing the front row (which includes Bristol brother’s George and Tom of GONGA) to headbang the fuck out of themselves. 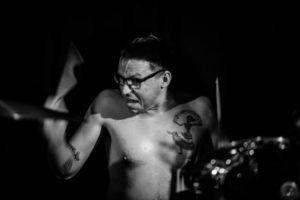 The band had me grinning inanely throughout at the impermeable nature of their assault which left me giddy with riffs ricocheting round my brain, so much so that my dreams became nightmares and were filled with chain-sawing giant bees chasing me down to my imminent death.

Despite this after effect, Oozing Wound are an uncompromising joy to behold, bringing a new perspective to the thrash genre. They are so unapologetic about their sardonic, seemingly ironic, music and lyrics that they have transformed themselves into the butterflies of the current new wave of thrash coming out at the moment.

All photos © Rebecca Cleal. Check out more of her brilliant photography over at her excellent website: rebeccacleal.com.