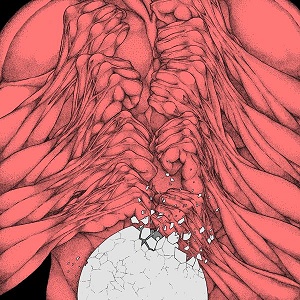 I shouldn’t like this. It’s not really my cup of tea. But, there’s something about it that makes me listen to it more than once.

Opener, Going Through The Motions Til I Die maybe isn’t something to play late at night when you’re getting ready for bed, but it’s certainly one to wake you up in the morning (wearing headphones of course so as not to wake the family!). It’s all power and aggression and shouty vocals (am I getting old?), and it’s actually not bad at all.

Through the seven tracks of Earth Suck, Oozing Wound treat us to some super fuzzed-out bass and amazingly frenetic drumming as they unfurl humankinds path towards destruction (what else?) and have a good laugh about it. If they can’t stop it then they’re going to have a damn good time along the way.

Don’t let your kids listen to the lyrics either, as tales of an unborn child eats its twin (Genuine Creeper) and going to work high on drugs (Hippie Speedball), the later of which seems to initially slow in pace before gaining speed (no pun intended) with a chugging guitar sound and throbbing bass.

Recorded in three days (so long?) Earth Suck apparently also features a viola. Somewhere. I’ve yet to find it, but who am I to doubt it? Maybe it’s rigged up to bass amp somewhere and yanked up to volume 11? Maybe it’s the screeching sound on When The Walls Fell which, as the highlight of the album is power personified whilst retaining enough elements of a song to actually be enjoyed.

With titles like Colonel’s Kernel that just make you grin, the accompanying music is stark, vivid and alive. False Peak (Earth Suck) ends the album and it’s straight into an unbelievably fast paced piece of madness.

Did I enjoy Earth Suck? I don’t really know to be honest, but I do know that it will get another listen.