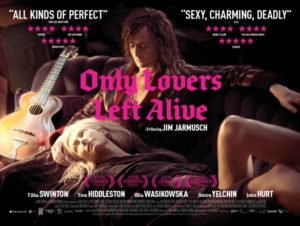 Only Lovers Left Alive. Undead but far from Uncool. . A crypto-vampire love story from Jim Jarmusch, anyone? Jamie Havlin discovers.

Incredibly, in recent years the public’s fascination with all things vampiric  has grown to the point where they’re now more popular than ever, just think of TV shows like True Blood and Vampire Diaries, novels like Stephenie Meyer’s Twilight saga and each of the subsequent Hollywood adaptations of those books which have been instant box office hits.

The problem though with the rise and rise of the vampire is that in the 21st century, with a few exceptions, they seem to have lost more than a little bite. Who would have predicted back in the silent era days of F. W. Murnau’s Nosferatu that the undead could ever evolve into something quite so bland as Edward Cullen? Indeed, Mattel have recently even produced a Barbie version of this “dazzlingly beautiful vampire”.

Asked at a press conference at Cannes what made him decide to shoot a vampire film, Jim Jarmusch quipped: “We heard you could make a lot of money with this kinda thing.”

Of course, Jarmusch has his own unique take on the subject and, obviously being Jarmusch, his vampires are much cooler than any of their ilk that you’re likely to ever see in any film franchise – even if they might look like they’ve just returned from an audition for The Sisters of Mercy at some point in the 1980s and be in desperate need of some hair conditioner. 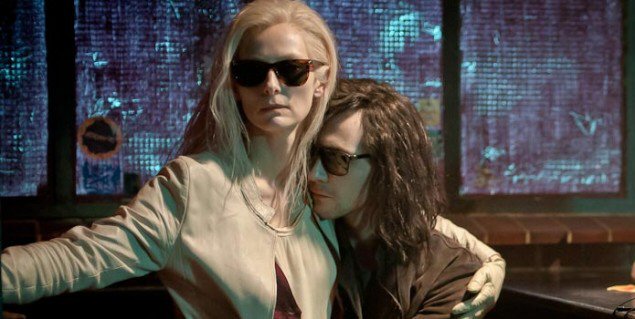 This, incidentally, is a description of Adam, a revered cult musician, who is holed up in a large and decrepit house in an isolated part of Detroit, where he spends most his time in a living room that resembles a cluttered junkshop specialising in outdated but not quite obsolete recording equipment and here he composes and tapes drone-rock that he has no desire to ever release.

Leading the sort of reclusive lifestyle that Scott Walker might even envy, Adam has only one apparent contact, a gofer called Ian (Anton Yelchin), who acquires for him a splendid looking selection of vintage guitars such as a 1959 white Supro and a glittering blue Hagstrom from 1960 but even these beauties aren’t guaranteed to lift his mood for any significant period of time and he makes a very unusual request to Ian, asking him to find a single .38 calibre bullet, made from the very densest wood and covered in a brass shell casing.

It’s for “a secret art project”.

Or so he claims.

Well, it must be hard not to be a little world weary when you’ve lived as long as Adam has. Maybe he misses Eve (Tilda Swinton), his wife since 1868.

With eyes as dark as her skin is pale, Eve is a striking, unearthly looking creature, who we’ve already seen weaving through the alleyways of Tangier to meet up with old mentor Christopher Marlowe (John Hurt), who provides her with a regular fix of high quality blood obtained illegally from a local doctor.

A phone call, where Adam spells out his utter disgust at how the zombiefied masses have messed up the world, convinces her to book the next (night-time) flight from Tangier to Paris and then another (night-time) flight to the Motor City – international travel being that bit more complicated for the undead – in an attempt to coax him out of his melancholia, which apparently has plagued him for centuries.

Once reunited, Adam’s spirits are revitalized and I should mention here that Only Lovers Left Alive isn’t only a vampire story but a love story too. Or, as Jarmusch describes it himself: “a crypto-vampire love story”. And, yes, the pair are actually rather loveable – though not remotely bland.

Like Adam, Eve is English, elegant, an intellectual and bohemian to the core. The couple make love, listen to vintage 45s like Can’t Hardly Stand It by Charlie Feathers and dance to Denise LaSalle’s Trapped by a Thing Called Love; they go for late night drives through the ghostly streets of the Motor City and shoot the breeze about Adam’s old artistic circle that included Byron and Mary Wollstonecraft and then they debate Einstein, Tesla and Darwin.

As they play chess, these sophisticated bloodsuckers even enjoy some of Eve’s homemade red lollipops. “O Negative,” she informs him with a mischievous glint in her eye.

There is one potential problem looming and it’s not the fact that with their nocturnal existence they’re running the risk of developing a bad case of vitamin B deficiency. Each experience a niggling dream about Eve’s younger sister Ava (Mia Wasikowska) and these prove to have been premonitions.

Ava is unrelentingly needy and brattish. Given the chance she’d happily imbibe Adam’s precious supply of blood with the recklessness of a barfly in a cheap boozer on a Friday night.

Needless to say, soon their brief domestic idyll is shattered.

I won’t give any more of the plot away although, as usual with Jarmusch, there isn’t really very much of it to give away in the first place – like many of the best directors, he’s not afraid to let a script breathe. If thrill a minute plots and gory horror scenes are your thing then you maybe ought to give this a body swerve.

On the other hand, if you’re willing to accept the languid pace and don’t mind just a little self-indulgence, then you might just enjoy two hours of immaculately crafted cinema. As with this director’s best films, there’s something engrossing and almost addictive about Only Lovers Left Alive; Hiddleston and Swinton are a pleasure to watch, the choice of Detroit and Tangier as locations was inspired and there are some crisply delivered one-liners too.

Special praise should also be given to the soundtrack, which, from the moment the movie begins with a close-up of Wanda Jackson’s single Funnel of Love spinning on a turntable, was impeccable. Josef van Wissem, who it turns out, is the world’s leading authority on lute music and Jarmusch’s own band Sqürl provide a superb, hypnotic score and the scene in the Moroccan cafe featuring Lebanese singer Yasmine Hamdan is truly mesmerising.

Hopefully enough cinemagoers decide to buy a ticket and Jarmusch and his backers do “make a lot of money with this kinda thing”. It took seven years before enough funding was secured to allow Only Lovers Left Alive to be shot and as Jarmusch has admitted, it’s becoming more and more difficult for left-field feature films like his to be made.

I might even go and see it again myself. And if I do, I’m sure I’ll enjoy it every bit as much as I did first time around.