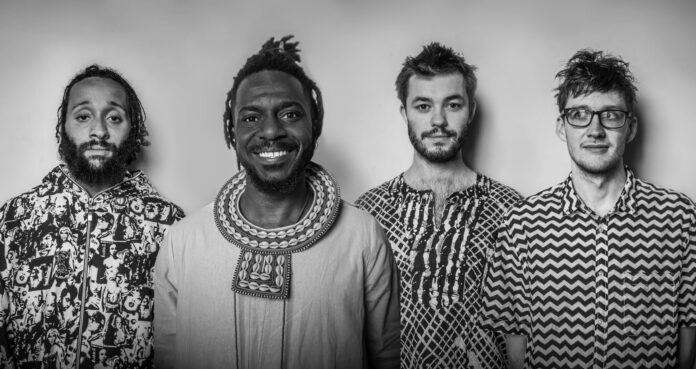 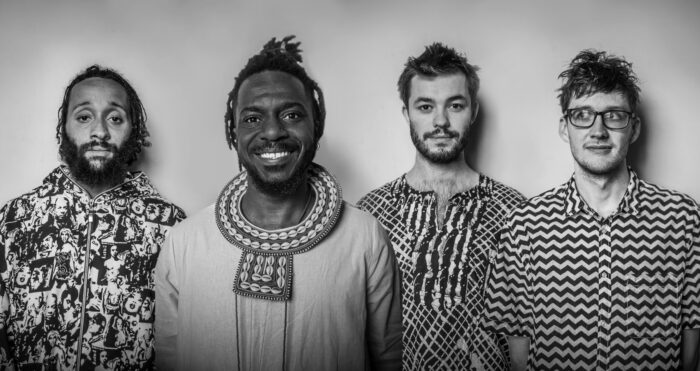 Andy Brown ventures out for his first gig of 2022 to witness Afrofuturism outfit Onipa in full effect. He shares his thoughts for Louder Than War.

Onipa is throwing a party and you’re all invited. After a particularly long week, it’s almost tempting to draw the blinds and stay in the house for as long as humanly possible. Tonight, this simply isn’t an option. KOG, Tom Excell, Finn Booth and synth-bass master Wonky Logic rolling into town can only mean one thing: it’s time to head down to the Brudenell Social Club for a night of Afrobeat innovation.

The night begins with West Yorkshire’s very own Afro-fusion outfit, Kontiki. The 5-piece seamlessly blend Afrobeat and highlife rhythms with funk and rock. Irresistible grooves are built around congas, bass, guitar, drums and sax as the band beckons our feet to the dance floor. Like some well-oiled music machine, every part of Kontiki is in constant and irrefutably funky motion. The percussionist flits between congas, shakers and windchime. The saxophonist divides his time between sax, tambourine and occasional cowbell. Kontiki is an octopus of sound, every limb excitedly grasping at an instrument.

The songs go off on some brilliantly eclectic tangents, absorbing jazz and dreamy psychedelia along the way. The musicianship is impressive but it isn’t the time to stand around, sagely stroking your chin. Kontiki wants you up on your feet and dancing. Well, it would be rude not to. The likes of the ridiculously funky Mangaroo simply can’t be fully appreciated from the sidelines. The only question is, would a Mangaroo have the head or legs of a man? Well, that’s up to you. One thing that’s not up for debate is how much funk and fun this band pack into a set.

With our hearts, minds and feet suitably warmed up, it’s time for Onipa to take to the stage. “We bring you blessings from the future, from the past” begins vocalist and cosmic conduit KOG as the band begins, “Leeds, this is Onipa!” Onipa is here to help us shake off those pesky January blues with an ecstatic ritual of sound and rhythm. KOG sings about his “darkest hour” as the atmospheric introduction makes way for the band’s exuberantly cathartic Afrofuturism. The Brudenell is already up and moving and they’ve only just got started.

I’m not exactly a natural myself yet you can’t underestimate the power of good dance. “There’s medicine in the dance” KOG tells us from the stage, “there’s power”. That power, that pure energy, is running through every single second of tonight’s performance. The weight of the week drops away from my shoulders as the band brings us together. There’s something indescribably joyous at the heart of Onipa’s performance. A celebration with drums, guitar, synth-bass, percussion, electronics and a little bit of theremin for good measure.

Onipa leads us through a set that fizzes with African poetry and Ghanaian grooves. Their boundary blending Afrofuturism thrives on Afrobeat, highlife and even a little “African Garage”. Their style is wild, eclectic and thoroughly their own. The excellent Woza has the entire Brudenell Social Club feeling, “nice and Irie”. A much welcome blast of heartfelt positivity on a cold January night. You can feel the genuine optimism and hope in KOG’s voice as he sings, “joy cometh in the morning”. This is party music for the soul.

KOG is absolutely electric as he dances around the stage; restlessly moving between the microphone, a spare drum, a cowbell and a balafon (a sort of West African xylophone). His voice is an incredible instrument in and of itself as he flits between styles with ease. It’s impossible not to smile as the vocalist leads us through a few of his finest moves and the entire room swivels their hips in unison. There really is medicine in the dance. They should prescribe this stuff on the NHS.

There’s a tangible sense of joyful chaos about the whole performance. Someone (who may or may not be in the band) runs onto the stage to dance with KOG and the energy levels go through the roof. Audience participation ranges from synchronised dancing to someone on the front row changing a string on Excell’s guitar. I haven’t seen a room this alive in quite some time. Onipa has taken us on a quest to find “love, healing and shelter”. It’s been a trip worth taking. Are you having a good time, they ask? The answer is an emphatic and enthusiastic yes!