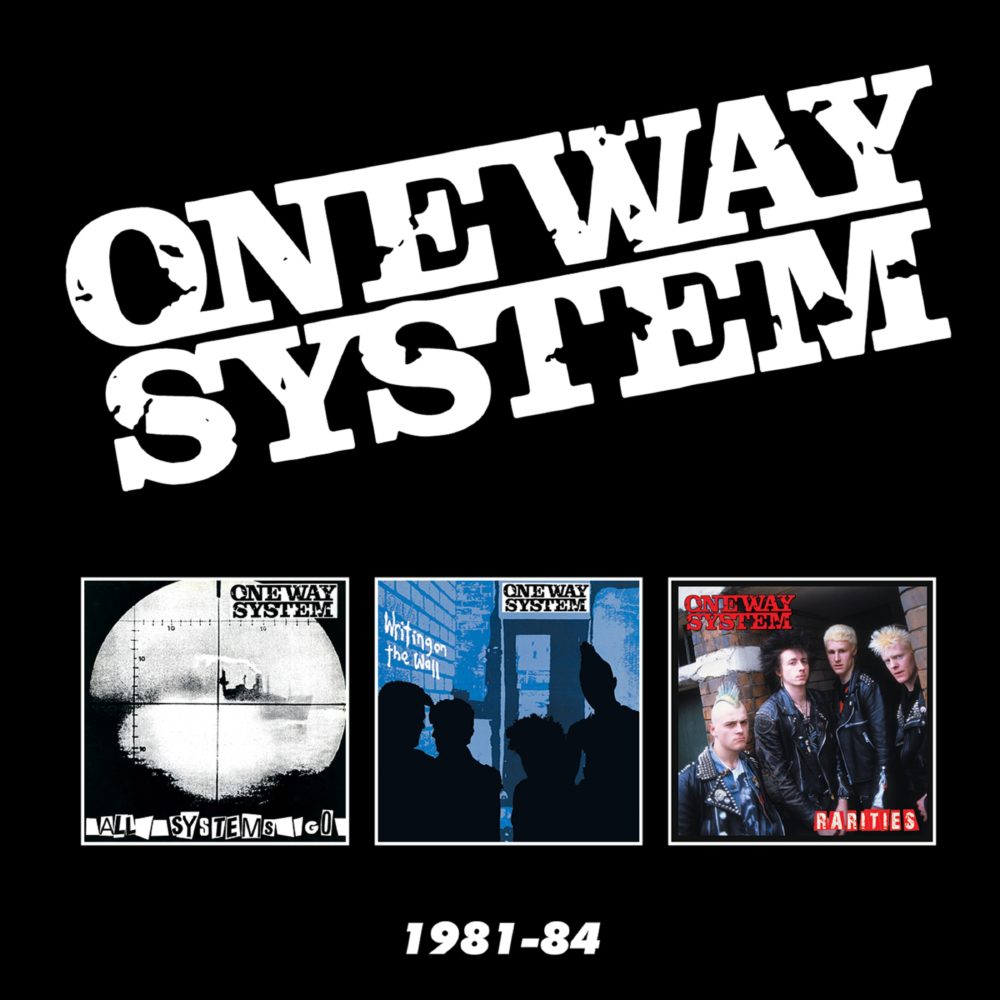 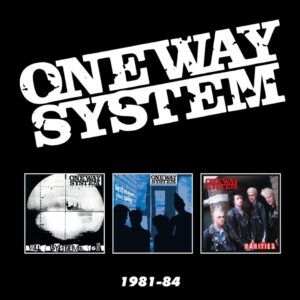 Boxset containing everything recorded in the early 1980s by UK82 mainstays One Way System, including the albums All Systems Go and Writing On the Wall….Ian Canty sees if it is a case of One Way love…..

Forming in Fleetwood, Lancashire in 1979, One Way System first made a mark on the various artists Country Fit For Heroes 12″ EP in early 1982. Consisting of demos sent into the Punk/Oi imprint No Future, this record was a hit on the Independent charts and such a success another volume followed a year later. Their track Jerusalem (featured in this rough form on the Rarities disc here) may not have netted them a No Future contract, which was odd because they would have fit right in on a roster that already boasted Blitz, the Partisans and Red Alert, but it did give them some crucial momentum. After the No Entry/Stab The Judge EP on the local Beat The System label, Cherry Red’s Punk off-shoot Anagram snapped the band up.

By the time of the All Systems Go LP the band had gone through a number of line up changes, eventually settling on Gav Whyte on vocals, guitarist David Ross and a rhythm section comprising of newcomer Tommy Couch on drums and bass player Gaz Buckley. Craig Halliday, one of the original two guitarists who contributed to the songwriting on the first album and singles, had left to join the Fits, leaving the band as a four-piece. One Way System wasn’t quite an Oi band (though originally sporting a mixture of Punk and Skin fashions) and certainly not an Anarcho outfit, so they and the likes of the Abrasive Wheels were some of the first bands the term Street Punk was applied to.

Debut album All Systems Go is a decent waxing of its type, only let down by containing a few “filler” tracks. Give Us A Future was a genuine howl of frustration for 80s UK youth and one of the highlights of ASG. Whilst you could argue the whys and wherefores, surely everyone was entitled to be able to look forward to a brighter tomorrow and dead-end YOP (Youth Opportunities Programme) schemes weren’t really going to help do that. A great fiery Punk single that summed a real situation faced by school leavers at the time with palpable and righteous anger.

Me And You is another number with a strong hook, but No Return and Waste Away are identikit UK Hardcore Punkers, to be honest. Better is the riffy One Way System theme tune and Breakin’ In, even if it does owe a little too much to Give Us A Future in terms of tempo and style. Some nice gritty playing makes Slaughtered stand out and All Systems Go ends with a version of the old Frankie Valli And The Four Seasons’ Northern Soul favourite (You’re) Ready Now (though it is likely that OWS knew it through the Slaughter And The Dogs cover). All things considered, for a 1982 Punk debut LP it wasn’t bad at all.

Disc two of this collection is the Writing On The Wall album in its entirety. Probably a more consistent record than its predecessor, it gave many a hope that there was still a place for this kind of music in the midst of the general feeling of decline in UK Punk during 1983. There’s a real muscular tone to the music and in particular, they get a great guitar sound throughout. If there wasn’t quite a genuine belter of the standard of Give Us A Future on this one, there was a more varied music palette and explosive mid-paced R&B Punk of Corrupted World gets things off to a good start. This Is The Age wasn’t a bad single too, solid and fast with a cynical lyrical viewpoint on new technological advances.

If One Day Soon and Nightmare saw them nudge towards proto-Speed Metal, the melodic intro to Neurotix and the nimble bass playing that leads Into The Fires took them away from being HM with short hair. Writing On The Wall ends on a high with three of the best offerings of the entire LP, Days Are Numbered, On The Line and Life On The Outside. All three sound great, enlivened by some great playing and there’s even a really catchy chorus on Days Are Numbered.

The final disc here rounds up the single tracks and includes some demos and rarities along the way. Some of the early demos Like 1980s and Spokesman For The Teenagers are understandably a bit lo-fi and restrained, only hinting at the brick wall power that the band would soon become noted for. By the time we get to the demo of Stab The Judge they’re closer to harnessing their might, even if the vocals are too far down the mix on this one and Me And You, which has a totally different emphasis on the chorus to the other takes included here. Then comes the No Entry/Stab The Judge EP, followed by another set of demos, one of which is a short comedy version of The Magic Roundabout theme.

Slade’s Cum On Feel The Noize was one of One Way System’s rare covers and a fair success in the Indie charts in 1983. You would have to do a lot to be better than Noddy’s lads and if OWS didn’t quite manage that, this is a decent enough shot. The Children Of The Night EP tracks for me are sabotaged by an echoing drum sound that drags down the drive of the songs, but for fans, the three tracks from an aborted third One Way System LP Miracles Take Longer will be of greater interest. By this time Gav had been replaced by Andy Gibson of the Genocides and these songs find the band moving more in the direction of tuneful Punk of Chelsea than the more hardcore stuff. The standout for me is Wondering Why, but all three have some good moments.

After splitting in 1986 One Way System reformed roughly ten years later and have continued on gamely ever since, with a number of different singers filling Gav Whyte’s post. One Way System was just a little short of the very best of the early 80s wave of UK Punk, but did produce some good efforts and the Writing On The Wall LP and the last demos demonstrated some potential that was sadly not to be realised. One Way System – 1981-1984 offers a thorough overview of an often overlooked band and is enjoyable enough listening for even the casual 80s Punk buff.