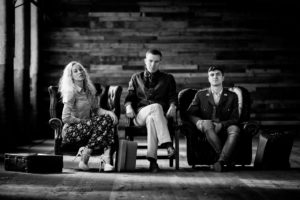 Ioan Humphreys reviews the fruits of the labour of One-Way Song and the release of their long awaited debut EP Passionate Leave.

I’ve reviewed One-Way Song a couple of times for Louder Than War with their last release Riviera Nightmare here. That review also has the link to the review of their previous release Dr. Spraza Lies, both of which appear on this their final completed EP.

Operating as a collective rather than a traditional band, the release features a diverse cast of musicians with drums/ production from Keiron Melling (The Fall, Imperial Wax), guitar/production from Mat Arnold (who has previously worked with artists as diverse as Tom Jones and Kanye West), lyrics from playwright Luke Gilfedder and vocals from Angus Macalister, Danielle Roseler & Jay Stansfield (a veteran of two Peel Sessions with tRANSELEMENt).

Opener New Last Sun has a great chord progression and a slow build with bass and drums that, along with the vocoder vocals, intensifies to a dramatic crescendo of noise and gorgeous vocals. This leads then leads straight into the afore mentioned Dr Spraza Lies with its (again) distorted vocals and unworldly feel that unsettles the listener and is exactly what One-Way Song seem to revel in.

The chaos of Dr Spraza Lies leads into Riviera Nightmare which as reported here, shows the breadth and depth that this band have. Apart from a ‘coda’ at the end of the EP, the last track Billy Fisher Fitzgerald is yet another exercise in song writing, lyricism, song construction and delivery. It still has the brilliant spoken word vocals peppered throughout, yet the track has an immediacy that lifts the song above and beyond the previous tracks.

The EP seems to have an ethereal feel to it in the way that there is now way you could pigeonhole this band. They run the gamut of lots of music genres, yet remain steadfast to their post punk roots.

The Passionate Leave EP has been a long time coming, yet the gestation period has more than paid off. It’d be a crime to ignore the next steps of this band, so keep in mind the name, One-Way Song. They will peeping their heads above the parapet again very soon.

Produced by Mat Arnold and Keiron Melling, the six-track EP was released in November 27th 2018 on Hilltown Records.