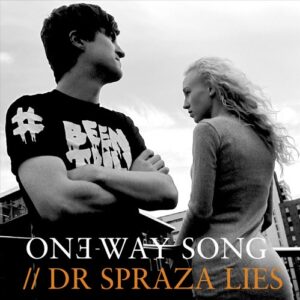 One-way Song are a fairly new duo to the always burgeoning Manchester music scene. Formed from the trails of a theatre group just a few months ago, Dr Spraza Lies’ represents the debut single from this embryonic group.

Apparently inspired by Jonathan Meades’ documentaries on Brutalism & modern dictators, the debut track from ‘One-Way Song’ starts with a loud and throbbing baseline with analog electronica overtones and classic Manchester beats. The distorted vocals come in and rant about Dr Sprazza Lies via MES and Davros.

Spouting words like ‘Brutalist genius’ over noise lets the listener know that this band aren’t just some chancers. Their spoken word lyrics touch on architecture, design, art and structures. Soundtracks to both a cacophony of noise and and New Order esque melodies and beats.

It’s nothing that i have ever heard before and something that i want to hear more of!! Send more One-way Song please…

One-way Song can be found via their Soundcloud and they tweet as @OneWaySong .