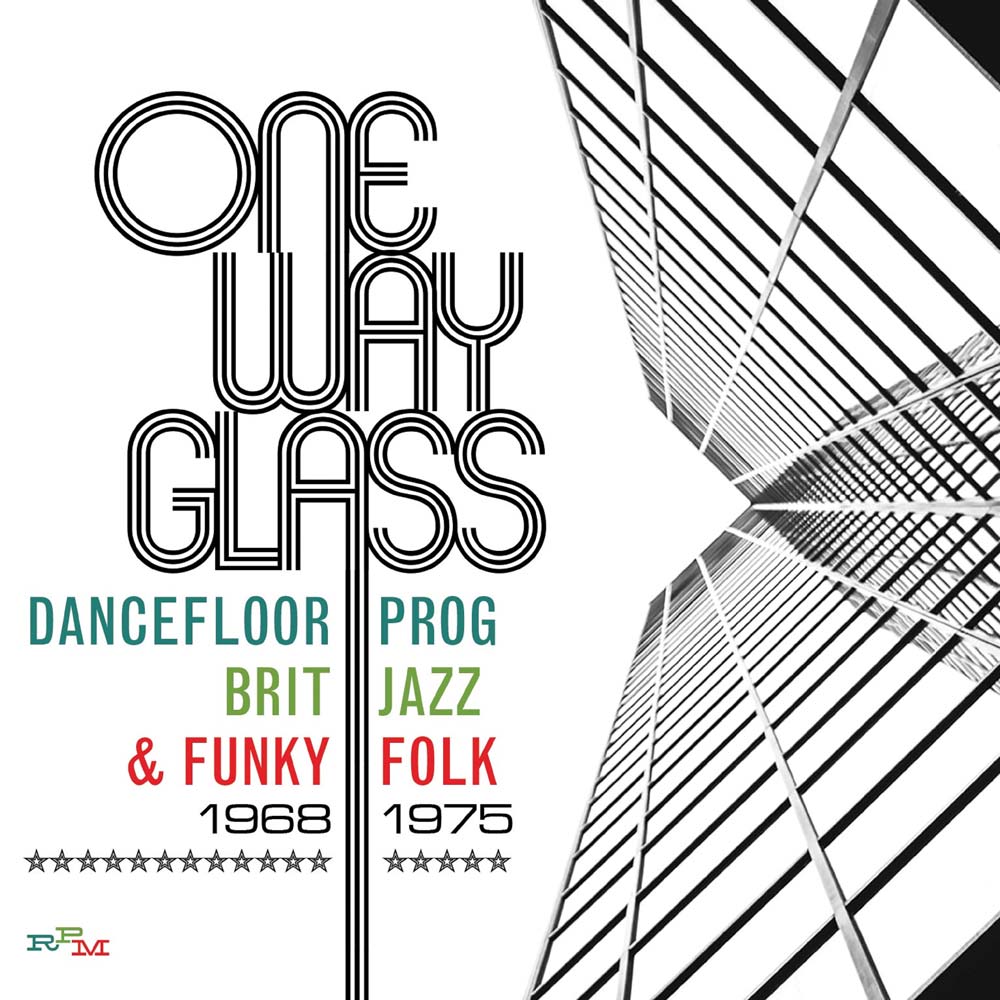 Is it really so strange (as I believe a young Stevie Morrissey once said) that the players of Prog and Folk managed at times to crank out some dancefloor fillers and killers during the same time span as their spacey and raggle taggle musings? As One Way Glass proves time and again, no it is not. Bear in mind that a lot of the musicians featured here cut their teeth and paid their dues in the dancehalls of the mid-60s, cranking out two sets a night to keep speeding Modernists on their feet. That’s some training. Also, it is very likely that these lads and lasses earliest influences came from US Jazz, R&B and Soul, the very building blocks of Funk itself.

Also we have to remember that early scene leaders the Nice got their start backing the wonderful PP Arnold and Pink Floyd were originally enmeshed in the Blues. Finally, wasn’t it a logical step for these artists to experiment with Funk as it presented similar opportunities for stretching out, jamming and indeed showing off instrumental chops? It all makes perfect sense if you think about it.

The compilers of One Way Glass have sought out all kinds of oddities in their pursuit of the great-coated groove and the individual acts’ stories are featured in the usual great accompanying booklet. Though present on Glass there are more than a few outfits that will not be familiar to anyone but out and out Prog and Folk nuts, bigger names like Arthur Brown, Joan Armatrading, Pentangle and Soft Machine are also present looking to shake a booty or two. To be honest not everything here is that Funky with some selections only having the merest hint of a shuffle beat, but they do represent a more playful side of bands that are often supposed to have taken everything very seriously. I do think that they are earnest in trying to present something danceable and different though. But even those contributions that don’t go for a full-on dancefloor attack are still for the most part entertaining, if not quite the boogie smashes one might expect.

Having established a little of the make up of this collection and its aims, it’s time to look at the contributions here in a little more detail. As ever we will have to go “broad brush” with 58 tracks on show and of course the joy of these type of collections is in the detail. But here is somewhat of a flavour and hopefully these will float your funky boat.

The set kicks off with the first version of title track One Way Class, in this instance provided by the obscure (well to me anyway) Trifle. Headed up by Pop singer George Bean, they only managed the one album in First Meeting, but here their mix of horns (a little in the style of early Dexys Midnight Runners) and soulful singing brings to mind the guvnors of Prog-Soul Audience (who feature later on with their fab House On the Hill). Following close behind, Heavyweight jammers Colosseum brush their Jazz Funk style close to Disco on Elegy and Paul Brett Sage hijack the Who’s Magic Bus on their 3D Mona Lisa. The Web rustle up some fine Pop with a touch of Soul in both their contributions City Of Darkness and I’m A Man, they probably fell betwixt two stools, too Pop for the Proggers but too out there for anyone else. A shame because on this showing they really had something.

Jonesy really have a great stab at pure Funk on Richochet with some great Soul vocals in the mix and Knocker Jungle win the battle for most Bogshed-like title with Sunburnt Virgin Trousers, though the sound of it is more Pop/Folk than anything else.

Former boaster of brand-new roller skates Melanie changes tack On Disc 2, taking the standard I’ve Got My Mojo Working and reworking it as a stinging Funk dance-a-thon. We also have Dana Gllespie, whose Weren’t Born A Man LP had a bizarre tie in with David Bowie. The title track of that record is presented on One Way Glass and it is a spacey and laidback number, a nice contrast to the speedier Funky flute efforts like Siren’s Wake Up My Children and Closer To The Truth by Alan James Eastwood. Those are good for what they are but a little less memorable than the more outrageous items on show. Though Demon Fuzz’s name might promise Garage heaven, their Message To Mankind is very gentle, a haunting piece of Soul-flecked Pop. I’ve long been a fan of the post-Winwood Spencer Davis Group and Funky by them is included here, though they weren’t really Prog or Folk. It’s not Funky as such, but a cooler piece of Jazz Pop would be difficult to imagine.

Moving onto the final disc here, it’s a boon to see the Tremeloes featured, as quite a distance on from their Pop successes they knocked out some fascinating and frequently insane material in the 70s. Their track featured here Instant Whip manages to take in Glam, Freakbeat and Funk and roll it into a crazy but very tasty dish indeed. Fat Mattress’ Margarita is really a nice bit of late-in-the-day Psych Pop, but as it’s lovely we will let it ride. Big hitters of Prog Soft Machine proffer some low-key thrills with a live take of Gesolreut and Skin Alley’s Underground Rock credentials give way to a flowing groove called So Many People.

For me Noir are a real discovery – their track Indian Rope Man is a little like the skittering, rolling guitar overload delight Hold On by Sharon Tandy and Les Fleurs De Lys (never, ever a bad thing) with plenty of pounding organ mayhem to spare. The bizarre Glam Jazz of Pesky Gee’s Pigs Feet and another reading of One Way Glass (this time with added fuzz guitar) bring things to a suitably wired close.

One Way Glass represents an eye opener for people with the usual stereotypical view of Prog, Jazz Rock and Folk. This comp does us a great service is it brings to the forefront the more fun elements of each genre, not displaying them in a po-faced manner (that could perhaps be levelled at some of the more archetypal works of each style) via this (usually) fleeting alliance with Dance Music. There’s many a fine groove here that could easily languish in obscurity, buried away in gatefold-sleeved platters, so it is nice to give them some light. Also this collection provides a way in for the curious, giving examples of these bands at their most accessible. The compilers have done the hard work in ferretting out all this great but obscure material – all you have to do is kick back and enjoy – and dance!